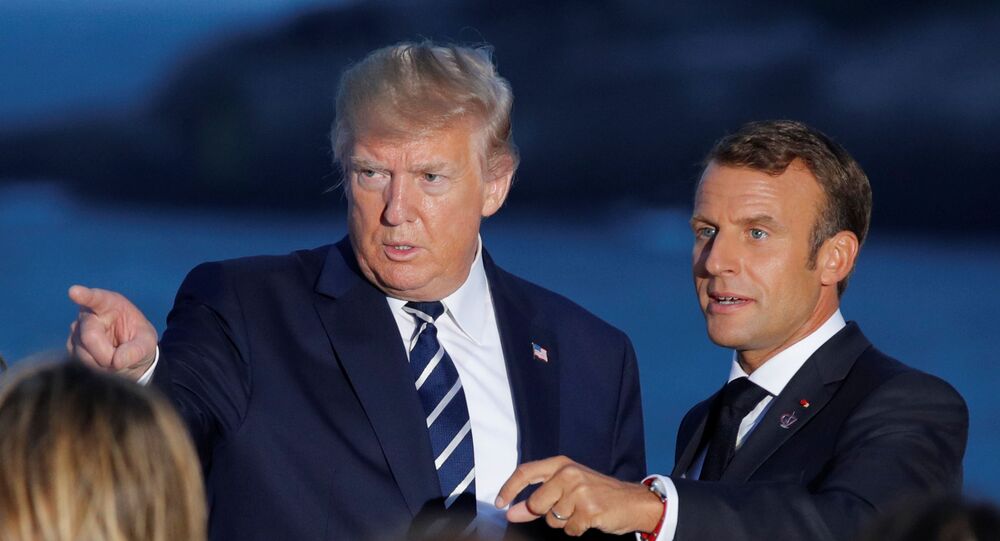 Iranian Foreign Minister Mohammad Javad Zarif, who has recently been sanctioned by Washington, made a somewhat big entrance on Sunday as he unexpectedly arrived in France's Biarritz where the G7 summit was being held.

US President Donald Trump has refuted reports that he was caught off-guard by Iranian Foreign Minister Mohammad Javad Zarif's "surprise" visit to the site of this year's Group of Seven summit - the French town of Biarritz.

Trump said that his French counterpart Emmanuel Macron discussed his willingness to invite Zarif and asked for his approval - and POTUS told him to go ahead with the plan.

While stressing that he respected the fact that Zarif arrived in Biarritz, Trump added that he did not want to meet the Iranian foreign minister because "it was too soon".

"I knew he was coming in and I respected the fact that he was coming in. And we’re looking to make Iran rich again, let them be rich, let them do well, if they want. I'm looking at a really good Iran, really strong, we’re not looking for regime change. You’ve seen how that works over the last 20 years, that hasn't been too good", he told reporters.

CNBC cited three unnamed officials on Sunday as saying that President Trump and his aides were "blindsided" when Zarif arrived in Biarritz.

Sources claimed that some in the Trump administration were enraged at the French government's decision to invite Zarif, who was slapped with US sanctions last month, to Biarritz without significant advance notice.

A senior administration official, however, said later that Trump "is never surprised by these types of actions", and that his staff "absolutely had an idea that he would be here", adding that they were "fairly certain" that the president was "aware of this potential at least yesterday".

After reports suggesting that an Iranian government plane landed in Biarritz on Sunday were confirmed by Iranian Foreign Ministry spokesman Abbas Mousavi, journalists surrounded Trump to ask for his reaction to Zarif's arrival - he said only "no comment".

It was widely reported that Zarif landed in the coastal French town at the invitation of his French counterpart, Jean-Yves Le Drian, with Mousavi confirming it on Twitter.

The Washington Post, however, cited an anonymous European official as speculating that Zarif's cameo was a "covert initiative" by French President Emmanuel Macron, who has been urging Trump and Iranian officials to return to the negotiating table and later met with the Iranian top diplomat on the sidelines of the G7 summit.

The Guardian, meanwhile, quoted a senior French diplomat as saying that Zarif had been invited to Biarritz for talks as part of Macron's diplomatic initiative aimed at de-escalating tensions in the Gulf.

"We have been trying for months to defuse tensions and create a pause for useful negotiations", the source said, adding that Paris was not acting as a mediator for Washington.

Likewise, the diplomat insisted that Macron had informed other participants of the summit, including Trump, that Zarif had been invited.

"The president had a conversation yesterday with all the G7 leaders and clearly the information was circulated. Our diplomats are working in full transparency with the United States".

Former US Ambassador to the UN Nikki Haley, for instance, took to Twitter to slam not only Iran, but also Macron for showing "disrespect" towards Trump, with a hashtag that says it all - #NotWhatFriendsDo:

This is completely disrespectful to @realDonaldTrump and the other leaders at the G7. Iran supports terrorism at every turn and continues to pursue “Death to America”. Manipulative of Macron to do this and very insincere. #NotWhatFriendsDo https://t.co/ujDe81c433

Zarif's surprise appearance in Biarritz followed an impromptu lunch between Trump and Macron after which POTUS hailed his friendship and "very good relationship" with the French president.

The G7 members have agreed to maintain join communication on Iran to stop it from obtaining nuclear weapons and prevent further escalation of tensions in the region, Macron announced on Sunday.

"We agreed that we will talk on Iran together, there is a G7 statement about our goals, and the fact that we share them is very important, it helps to avoid disagreements that weaken everyone. We all agree with two clear things: we do not want Iran to have a nuclear bomb, and we do not want an escalation and destabilisation of the region", he said, adding that the decision would "allow them to reconcile their positions".

Last month, the Trump administration imposed sanctions and travel restrictions on the Iranian foreign minister, claiming that he "spreads the regime's propaganda and disinformation around the world".

Zarif reacted to the decision on his Twitter account by "thanking" the United States for deeming him such a "huge threat to [its] agenda":

The move came as part of the US "maximum pressure" policy on Iran as Washington was lobbying countries around the world to sign up for an international maritime coalition in the Persian Gulf against an alleged Iranian threat.

Under the plan, dubbed Operation Sentinel, foreign vessels would operate in the Persian Gulf, in the Strait of Hormuz, in the Bab el-Mandeb Strait, and the Gulf of Oman to secure navigation routes in the aftermath of oil tanker incidents there. The alleged sabotage attacks were blamed on Tehran, which has strongly denied any wrongdoing.

Relations between Washington and Tehran have dramatically deteriorated since May 2018, when Trump withdrew from the 2015 nuclear deal and reinstated all sanctions against Iran. On the one-year anniversary of the unilateral US pullout from the agreement, Tehran announced that it would suspend some of its voluntary commitments under the deal, but insisted that it was not interested in developing nuclear weapons.