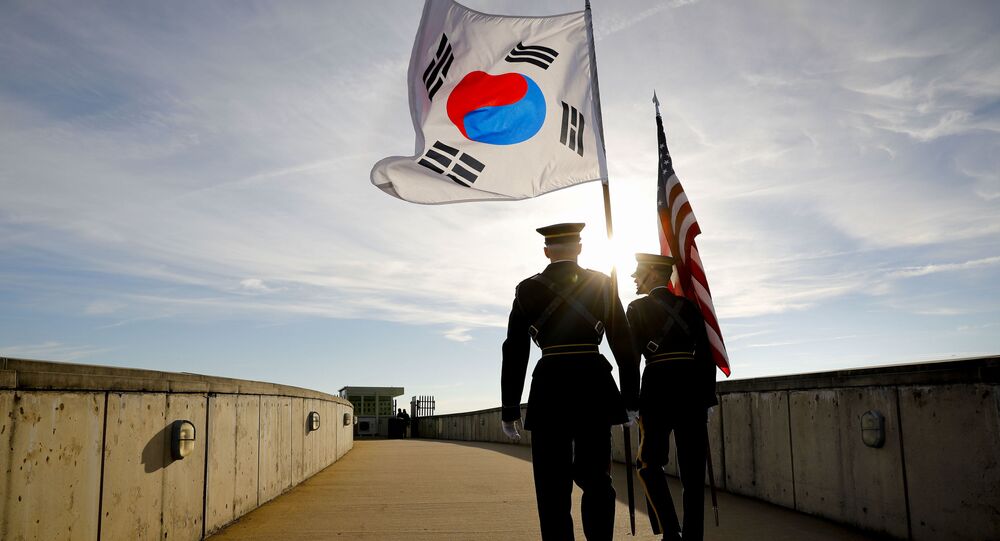 The US has extended an invitation to a number of countries in Asia and Europe to join efforts allegedly aimed at protecting shipping in the crucial oil-exporting lane in the Strait of Hormuz. However, few countries have accepted the offer with Germany declining it and France reportedly remaining hesitant about it.

The minister reportedly responded that his country was considering various alternatives with regard to the situation in the Persian Gulf since its ships are also sailing through the Strait, whose importance Seoul fully comprehends.

The Pentagon has denied making an official request for South Korea's assistance in the planned maritime mission, but rather described it as a kind of "solicitation" that came amid discussions on bilateral cooperation between the two states, the news agency added. South Korea's Defence Ministry hasn't commented on Yonhap's report.

The US announced the creation of a naval coalition in the wake of the arrest of a British tanker by Iranian authorities over alleged violations of maritime laws and attacks by unknown forces on ships in the Gulf, claiming that its goal will be to ensure the safety of navigation through the crucial oil-exporting lane - the Strait of Hormuz.

Washington invited several countries from Europe and Asia to participate in this coalition, but so far few responded. While the UK has shown interest in participating in the American mission, Germany opted for diplomatic efforts as a mean to reduce tensions in the Gulf and stated that its participation in America's "maximum pressure" campaign against Iran has been "ruled out".

Iran has slammed the planned American maritime mission as endangering the international waterway and expressed skepticism about Washington's chances of rallying allies for it. Tehran, furthermore, stated that it will be the Gulf's "security guardian" on its own without US help.

The US criticised Iran's arrest of the British tanker Stena Impero over purported violations and accused it of organising two separate attacks on six tankers in the Gulf in June and May, something that Iran has vehemently denied. An official investigation of one of the incidents by the UAE showed that a state actor was behind it, though the probe failed to point a finger at the exact state.