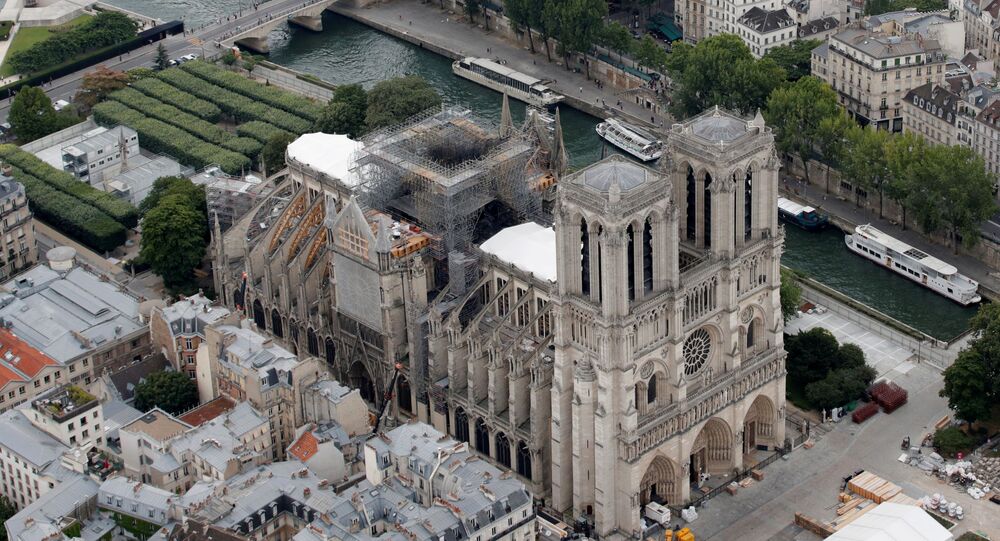 On 15 April 2019, the iconic Notre-Dame de Paris Cathedral was engulfed in flames; the iconic Gothic house of worship lost its entire roof and spire. Independent US publisher GoArchitect announced an unofficial competition to create a new vision for the future of the cathedral.

Chinese designers Zeyu Cai and Sibei Li have been announced as the winners of The People's Notre-Dame Cathedral Design Competition.

The competition was announced by GoArchitect, an independent US publishing house unaffiliated with the French government, the Catholic Church or the cathedral. The winners were awarded a thousand dollars.

With 226 entries from 56 countries, the winning proposal was chosen by the public with over 30,000 people casting votes.

The Chinese designers’ proposal, entitled Paris Heartbeat, consists of three parts: “a crystal roof as a mirror to reflect historical urban context, a spire's tip as a time capsule to retrospect the history, and the main spire as a city kaleidoscope to celebrate the vision of a cityscape”.

The new spire is reinterpreted in poly-mirrors based on the classical proportions and octagonal geometry of the original spire.
A time capsule, designed to be opened every half century, is floating at the top of the spire.

The spire's tip, symbolising the heartbeat of Paris, moves rhythmically up and down, breathing and beating together with the city.
The inside reflection of the tower spire creates a city kaleidoscope, with the vibrant glass brought to life by the light, as the structure expresses the shadow.

© AP Photo / Thierry Mallet
In this image made available on Tuesday April 16, 2019 flames and smoke rise from the blaze after the spire toppled over on Notre Dame cathedral in Paris, Monday, April 15, 2019

Paris Hearbeat will be featured in a new book featuring all 226 designs called Visions of Notre-Dame.

The competition aimed to create a new vision for the future of the iconic cathedral after a devastating fire ravaged Notre Dame on the evening of 15 April 2019. The cathedral’s steeple collapsed as the supporting structure was engulfed in flames.

According to firefighters, the pillar structure of Notre Dame, as well as the priceless relics and works of art stored in the cathedral, survived.

French President Emmanuel Macron announced his intention to restore Notre Dame in five years, as international organisations and large companies offered to pitch in and help raise funds for the restoration of the cathedral.