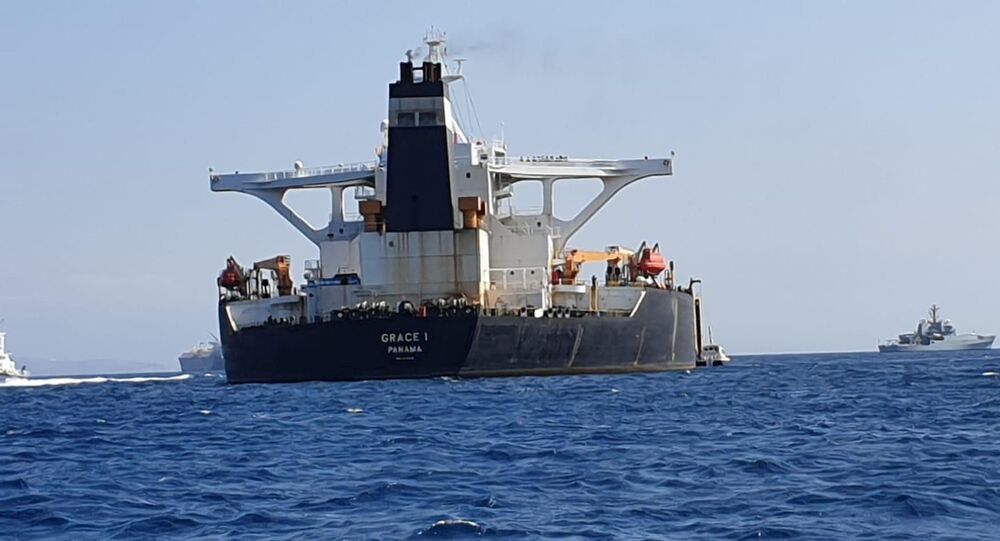 The statement comes a week after Iran’s Foreign Minister Mohammad Javad Zarif said that the seizure of an Iranian oil tanker is tantamount to "piracy" and "sets a dangerous precedent".

Iran’s Supreme Leader Ayatollah Ali Khamenei has warned that Tehran will respond in kind to a recent seizure of an Iranian tanker by UK Marines in Gibraltar.

"Evil Britain commits piracy and steals our ship [...] and gives it a legal appearance. Iran and those who believe in our system will not leave such evil deeds unanswered", Khamenei said during a meeting with Friday prayer leaders from across Iran on Tuesday.

Separately, Khamenei explained Tehran’s drive to reduce its commitments under the 2015 nuclear deal, also known as the Joint Comprehensive Plan of Action (JCPOA). The Islamic Republic announced that it would not stick to some of its JCPOA obligations on 8 May, exactly a year after the US unilaterally pulled out of the Iran deal.

He spoke after Iran’s Foreign Minister Mohammad Javad Zarif tweeted last week that the seizure of an Iranian oil tanker is tantamount to "piracy" and "sets a dangerous precedent".

“Iran is neither a member of the EU nor subject to any European oil embargo. Last I checked, EU was against extraterritoriality. UK's unlawful seizure of a tanker with Iranian oil on behalf of #B_Team is piracy, pure and simple […] and must end now", Zarif emphasised.

The remarks followed Iranian cleric Kazem Sedighi pledging that Britain will soon be "slapped in the face" for its capture of an Iranian tanker.

"This is a dangerous game and has consequences ... the legal pretexts for the capture are not valid ... the release of the tanker is in all countries' interest ... Foreign powers should leave the region because Iran and other regional countries are capable of securing the regional security", Mousavi adder.

On 4 July, port and law enforcement agencies of the British overseas territory of Gibraltar, aided by the UK Royal Marines, seized the Iranian supertanker Grace 1, claiming that the vessel was transferring crude oil to Syria from Iran in violation of EU sanctions.

Iranian Deputy Foreign Minister Abbas Araqchi, for his part, pointed out that “contrary to what the British authorities are claiming, the tanker was not headed for Syria” and that a Syrian port mentioned by the UK as the tanker's destination would not be able to accommodate the vessel.