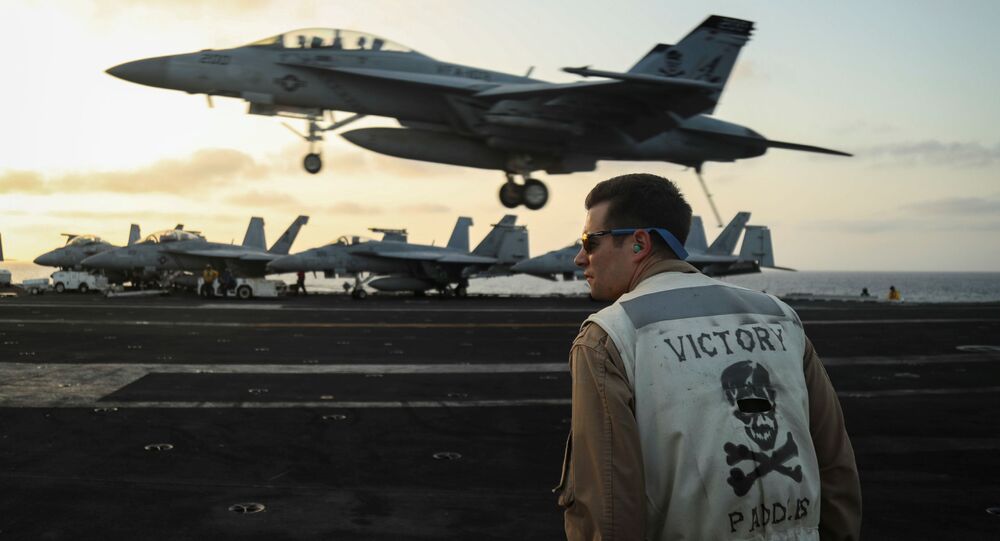 The already-strained relationship between Tehran and Washington ties worsened on 20 June, when Iran said that it had downed a US drone over Iranian soil. US President Trump then tweeted that he had halted a military strike against Iran 10 minutes before it was set to be carried out, upon learning that some 150 Iranians might die in the attack.

Mojtaba Zolnour, the chairman of the Iranian parliament's National Security and Foreign Policy commission, has warned in an interview with the Tehran-based Arabic language news TV network al-Alam that if the US attacks Iran, “only half an hour will remain of Israel's lifespan”.

The statement was made against the backdrop of ever-increasing regional tensions due to worsening ties between the US and Iran; an Israeli intelligence source, in turn, reportedly claimed that Iran may attempt to provoke Israel along one of its borders to try to escalate the ongoing hostilities with the US.

The US-Iranian tensions escalated last month following an apparent sabotage attack against two oil tankers off Iran's coast in the Gulf of Oman. Washington immediately blamed Tehran for the attacks, while the Iranian Foreign Ministry accused the Trump administration and its Israeli and Gulf State allies of deliberately escalating the situation to “cover up” the US’ “economic terrorism against Iran”.

Relations between Iran and Israel also remain strained, with the Jewish state repeatedly accusing the Islamic Republic of supporting “terrorist” groups such as Hezbollah and Hamas, and of waging proxy wars in countries such as Syria which could pose a threat to Israel's security. Iran denied the charges, accusing Israel and its allies of engaging in military aggression throughout the region.

Zolnour Rejects Trump's Claim He Stopped US Attack on Iran

Separately in the interview, Zolnour refuted the US President’s recent claim that he had allegedly prevented a military strike on Iran with just 10 minutes to go as a “political bluff”.

“If they [the Americans] had predicted their attack would be successful, they would not have cancelled it and it would definitely have happened,” Zolnour said.

His comments come after US President Donald Trump issued a multipart statement on 21 June confirming that he had “stopped” a military strike against three sites in Iran 10 minutes before it was launched after finding out that about 150 people would die in the attack.

“You were really worried about 150 people? How many people have you killed with a nuclear weapon? How many generations have you wiped out with these weapons?" Zarif was cited as saying by the Iranian news agency IRIB, in an apparent nod to the devastating atomic bombing of Hiroshima and Nagasaki in August 1945, which ended World War II.

Repercussions of the IRGC Downing of US Drone

Trump’s tweets followed earlier media reports that the US President had reportedly approved an attack on Iran in response to Thursday's drone shoot-down, but backtracked at the last minute.

Trump’s remarks were preceded by the Iranian Islamic Revolutionary Guard Corps (IRGC) saying on 20 June that they had brought down a US Northrop Grumman RQ-4 Global Hawk surveillance drone flying over Hormozgan Province on the nation's southern coast because it violated the country's airspace.

The US Central Command, for its part, said that the unmanned aerial vehicle was hit while operating over international waters in the Strait of Hormuz. The developments worsened the already tense ties between Tehran and Washington, which have been deteriorating since Trump announced the US’ withdrawal from the 2015 Iran nuclear deal, also known as the Joint Comprehensive Plan of Action (JCPOA) on 8 May 2018. Additionally, Trump said that he was reinstating harsh economic sanctions against Iran.

Exactly a year after, Tehran announced that it suspends some of its obligations under the JCPOA, in what was followed by more US’ anti-Iranian sanctions and the delivery of a US aircraft carrier strike group to the Middle East, in what US National Security Adviser John Bolton described as a “message” to Iran.