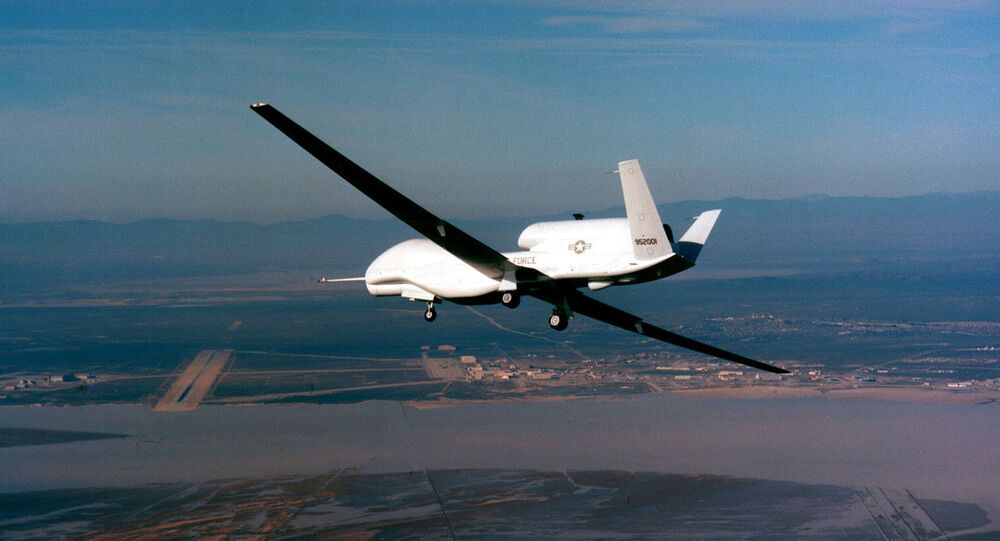 Iranian paramilitary forces stated on Thursday that a US spy drone had been shot down after entering Iran's airspace; it had flown over Hormuzgan province in the south of the country.

Major General Hossein Salami, the commander-in-chief of Iran's elite Islamic Revolutionary Guard Corps, said on Thursday that the country had downed a US drone to send a "clear message" to Washington.

"The downing of the American drone was a clear message to America," Salami said, as quoted by state TV. He went on to warn that Tehran would "react strongly" to any aggression, describing Iran's borders as its red line.

"Iran is not seeking war with any country, but we are fully prepared to defend Iran," he added.

Earlier in the day, the IRGC reported that Iran had downed a US spy drone, identified as a RQ-4 Global Hawk, which had flown over Hormuzgan province in Iran's south.

According to the Revolutionary Guards, the drone took off from a US base and disabled its "tracking equipment".

The US military, meanwhile, confirmed that the drone had been downed with a surface-to-air missile over the Strait of Hormuz but insisted that it had not breached Iran's airspace.

"US Central Command can confirm that a US Navy Broad Area Maritime Surveillance (or BAMS-D) ISR aircraft was shot down by an Iranian surface-to-air missile system while operating in international airspace over the Strait of Hormuz at approximately 11:35 p.m. GMT on June 19, 2019," the CENTCOM said in a statement.

A US official also told Reuters on condition of anonymity that Iran did shoot down a US drone − an MQ-4C Triton − while it was flying in international airspace.

This follows last week's oil tanker incidents near one of the world's most strategic chokepoints, just off Iran's coast. Washington was quick to blame Tehran for what appeared to be an attack on the vessels, but the Islamic Republic denied any involvement.

Days after the incidents, the Pentagon okayed the dispatching of an additional 1,000 troops to the region, following the deployment of an air carrier group and a bomber task force in response to reports that Iran or one of its proxies was planning an attack against the United States.

The IRGC commander, however, said that the "aircraft carriers’ scenario is over" for Iran as it has acquired an unspecified system capable of "steering a ballistic missile".

The US Central Command accused Iran last week of attempting to shoot down its drone that was monitoring the movement of one of the two tankers that were hit in the Gulf of Oman.

Relations between Washington and Tehran have spiralled since May 2018, when Donald Trump scrapped the 2015 nuclear deal, which curbed Iran's nuclear programme, claiming that it failed to stop Iran's ballistic missile programme or its alleged sponsorship of terrorism across the region. The US administration has since adopted a "maximum pressure" policy aimed at pressuring the Islamic Republic into negotiating a 'better' deal, but appears to have achieved quite the opposite so far.

Iran last month stopped curbing its stocks of enriched uranium and heavy water and vowed to continue suspending its commitments under the 2015 accord if the remaining signatories fail to shield it from tough US sanctions.