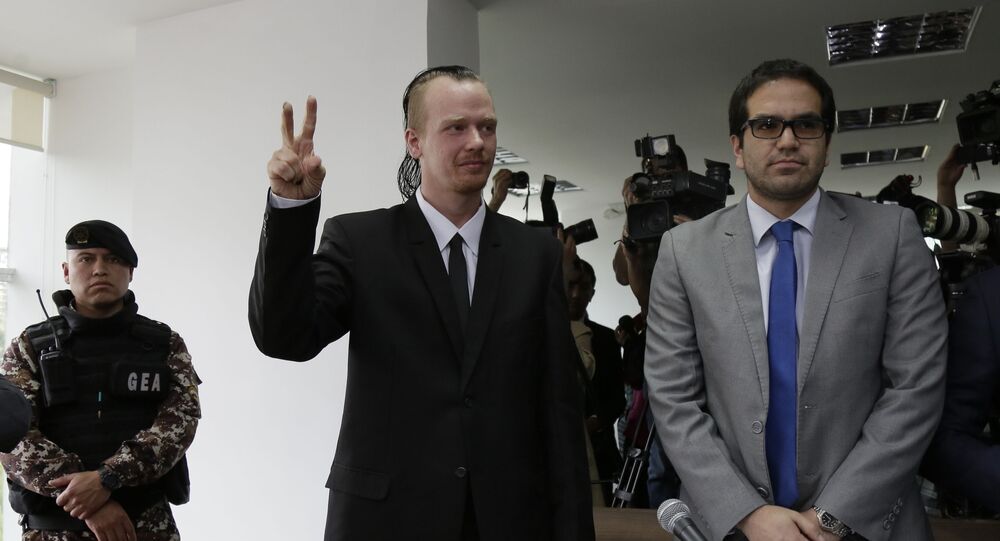 The father of imprisoned Swedish programmer and activist Ola Bini has called his son a “political prisoner” and suggested the US and Ecuador are concocting a fictional collaboration between his son and Julian Assange to put the latter behind bars.

While UK Home Secretary Sajid Javid approved WikiLeaks founder Julian Assange's extradition to the US, the pressure on Assange's Swedish friend, programmer and activist Ola Bini, who was arrested on the same day, is mounting as well.

“My son is imprisoned without knowing what he is accused of and without evidence. He has become a political pawn in a large game where the US is also involved. It seems that the US believes they can get Assange via Ola”, Bini's father, Dag Gustafsson, told the Norwegian daily Klassekampen.

According to Gustafsson, Ecuador and the US are “desperately looking for ties” between Bini and Assange. Gustafsson also believes Ecuador “breaks its own and international laws” by holding Bini behind bars.

“The way I see it, Ola's imprisonment is all about about his relations with Assange” Gustafsson said. “He has seen Assange's friends disappear one by one and felt it was his duty to maintain contact for Assange not to be completely isolated”, he explained the contacts between Bini and Assange, assuring that Ola had “nothing to do with either WikiLeaks or Assange's own activities”.

According to Gustafsson, the case is about the authorities doing “preventive work” against knowledgeable people, such as Ola, whose vision and goal is “to make sure that people can communicate without being intercepted by authorities”.

International legal team including lawyers from @GuernicaLaw37 for @olabini have filed an #UrgentCommunication with the UN Working Group on Arbitrary Detention, which investigates arbitrary arrests and detention around the world. https://t.co/PxnAMhonwH

​Bini's parents have visited their son twice and maintain contact via Bini's lawyer.

“The conditions in the prison are not very good, but he has as good a legal support as possible. The problem is that there are so many political overtones in this”, Gustafsson said. According to him, it would be easier if Ola “had actually broken some laws” and there was “an objective reason for his imprisonment”, describing the situation as “extreme” and calling it the “biggest crisis in our family”.

On 11 April, Bini was arrested at Quito Airport and imprisoned. While Bini was on his way to a martial arts training camp, Lenin Moreno's government claimed he had fled. According to Gustafsson, the allegations are untrue, as the trip had been booked “months in advance”.

Ola Bini is an Swedish-born and Ecuador-based computer programmer and activist. He is sometimes referred to as one of the world's foremost developers of software that complicates communication monitoring on the internet.

He moved to the capital Quito when the digital consulting company Thoughtworks opened a local office there in 2013. Through his work and activism, he established a friendship with Julian Assange and has since 2013 visited the WikiLeaks boss several times.

Bini's lawyers have asked the UN Working Group on Arbitrary Detention to address the case. Bini's current imprisonment expires on 10 or 11 July.