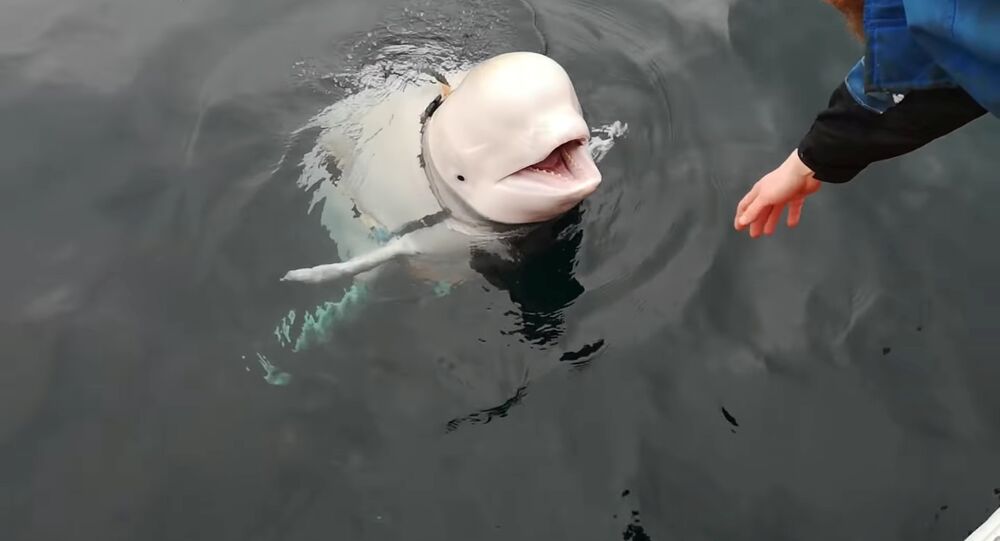 First sighted last week by local fishermen off Norway's coast, the beluga whale was allegedly wearing a harness with the inscription “Equipment of St. Petersburg, and a mount for a GoPro camera.

A beluga whale, which has delighted locals by swimming near Hammerfest, Norway appears to have been trained, with videos posted on social media showing it performing tricks.

The friendlier-than-normal mammal has been allowing people to pet it and is unusually comfortable with humans being nearby, according to CNN, citing Norwegian locals.

A beluga whale believed by marine experts to have been trained by the Russian military is enjoying its stay in Norway — and the locals are loving it, too https://t.co/LeJ1q3qxHY pic.twitter.com/FtAGSp91qb

Particularly, footage posted online show the begula whale being fed by hand, dancing in circles and even checking out an inquisitive dog.

Although speculation about its origins is rife, Norwegian police have yet to confirm where the mammal came from.

A #beluga #whale was spotted in #Norway wearing an odd harness with “Equipment of St. Petersburg” written on the inside.
The harness was thankfully removed.
Locals speculate the whale may have escaped captivity, but are unsure how.
Video- IG:@norge IG:@wiiiig#DolphinProject pic.twitter.com/CzrqsjhUf5

First spotted off the coast of Norway by fisherman last week, the whale has since refused to leave the vicinity of Hammerfest’s port.

© Photo
Norway Claims to Have Caught Runaway "Spy Whale From Russia" (PHOTO, VIDEO)
Fishermen who first saw the mammal claimed it was wearing a harness, stamped with the words “Equipment of St Petersburg”, thus stoking speculation that the whale had been trained by the Russian military. The Russian Defence Ministry has not commented on the claims yet.

However, as fears mount regarding the mammal’s health, Audun Rikardsenl of Tromso’s Arctic University told NRK, Norway’s public broadcaster, that it’s concerning how it will manage on its own. “We know whales released from an aquarium can find it difficult to adapt to life in the wild.”

Claiming they now felt a responsibility for the whale’s well-being, Mr. Ree Wiig told the broadcaster that the fisheries directorate would keep track of the mammal.

There have been suggestions, according to Wiig, that the sea mammal be sent to a sanctuary in Iceland about 2,000 km away, since this is believed to improve its chances for survival.

The beluga whale, which is pale white and larger than a dolphin but smaller than a true whale, is an Arctic and sub-Arctic species and a close relative of the narwhal.

Belugas are one of several whale species which are commonly kept in captivity and at aquariums, dolphinariums, and wildlife parks across the globe.