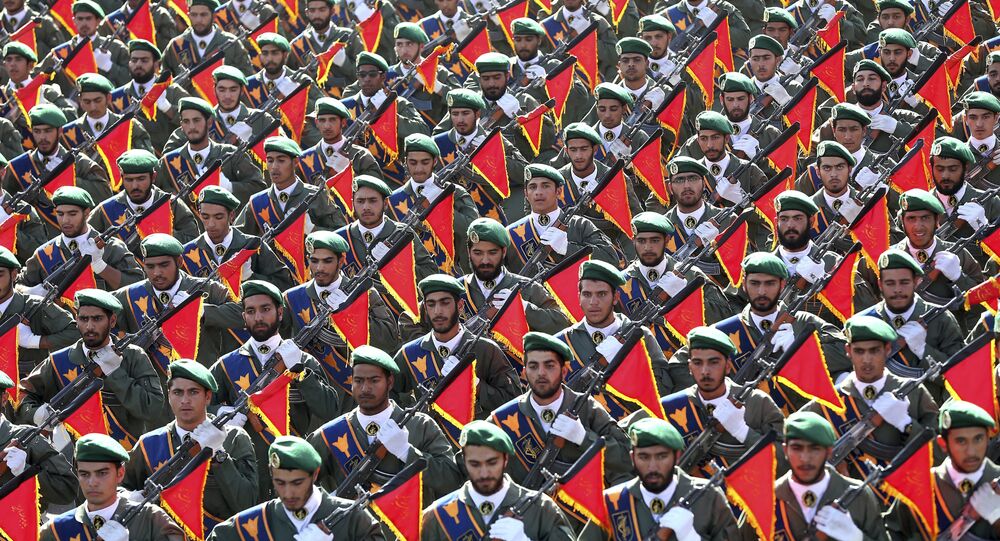 Earlier, the US formally designated Iran's Islamic Revolutionary Guard Corps (IRGC) military unit a foreign terrorist organisation, with Tehran responding by placing first US Central Command and then the entire US military on its own list of terrorist groups.

The US State Department has waived a ban on US travel to government officials, businessmen, and workers of non-governmental organisations that have dealings with the IRGC, two notices outlined by Secretary of State Mike Pompeo on the Federal Register's website have indicated.

Specifically, the exceptions allow individuals working with the US in Iraq and Lebanon to also maintain contacts with the IRGC without repercussions. Iran and the US each engage in diplomatic and military efforts in both countries, including in the fight against Daesh (Islamic State)* and other widely recognised terrorist groups.

Pompeo specified that the travel ban waivers were based in US national security and foreign policy interests.

In one of the two explanatory notes, the secretary of state noted the sanctions wouldn’t apply "to any business, organisation, or group, whether public or private, solely based on its provision of material support to any foreign government sub-entity that has been designated as a foreign terrorist organisation." In the other, he indicated that the sanctions wouldn't apply "to any ministry, department, agency, division or other group or subgroup within any foreign government" unless they were already covered by existing US restrictions.

© AFP 2021 / Atta Kenare
Iranian FM: Trump Doesn't Want War, But Could Be 'Lured Into One'
The exemptions are significant and unusual, because under US law, foreigners believed to have provided "material support" to organisations designated as foreign "terrorist" groups are traditionally banned from entry into the country.

The notices confirm an earlier Reuters report, citing three officials familiar with the matter, which indicated that foreigners working with the IRGC wouldn't necessarily face US travel restrictions.

The US IRGC 'terrorist organisation' took effect on April 15, one week after President Trump announced that the US would be making the decision. The controversial move, which contradicts the traditional definition of a terrorist as a non-state actor, was the first time that Washington designated a portion of a foreign state's military as a 'terrorist' group.

News of the exemption also comes amid a report by AP citing anonymous officials, congressional aides and advisors familiar with the matter who said that the administration may allow for loophole workarounds to Iranian oil exports if the White House doesn't renew import exemptions on Iranian oil once the May 2 deadline granting waivers to countries including China, India, Japan, South Korea and Turkey expires.

Officials from China and Turkey have already indicated that they would look for ways to continue imports even if the sanctions waivers are not renewed.

© REUTERS / Raheb Homavandi
Seoul Seeks to ‘Persuade’ US to Extend Iran Sanction Waivers After May Deadline
Iranian Foreign Minister Mohammad Javad Zarif said Wednesday that he doesn't think Trump wants a war with Iran, but warned that he might be 'goaded' into one by individuals like National Security Advisor John Bolton or Israeli Prime Minister Benjamin Netanyahu. Accusing the US of pursuing a "very dangerous" policy toward Tehran, Zarif said Trump was wrong if he thought sanctions could get Iran to change course, quipping that Iranians were "allergic to pressure."

Traditionally poor diplomatic relations between Iran and the US took a turn for the worse in May 2018, after Washington unilaterally withdrew from the 2015 Iran nuclear deal and imposed several rounds of tough sanctions, including oil restrictions meant to drive the country's energy exports down "to zero." Tehran has responded by saying it would continue oil exports, and threatened that it would blockade the Strait of Hormuz waterway carrying a fifth of the world's oil supplies if threatened. The US and Iran have not enjoyed normal diplomatic relations since the Islamic Revolution of 1979.

Iran's Rouhani Reveals Conditions for Resumption of Negotiations With US