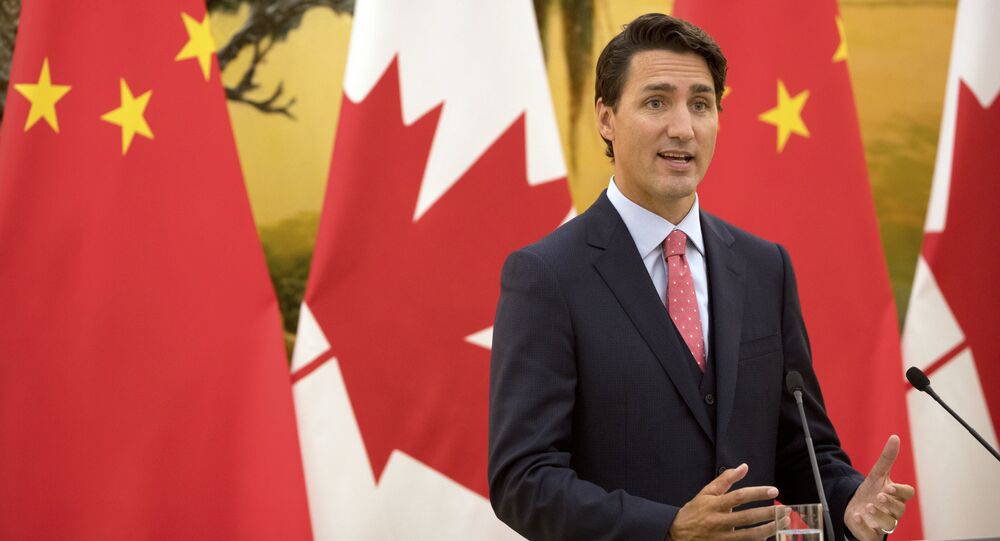 Prime Minister of Canada Justin Trudeau says he is interested is striking free trade deals with both Mainland China and the 10-country bloc of ASEAN countries as part of Ottawa’s effort to boost its agricultural exports and diversify its foreign trade.

Kristian Rouz — Canadian Prime Minister Justin Trudeau says his cabinet might negotiate a bilateral trade deal with Mainland China, aimed and boosting the exchange in goods and services between the two countries.

Trudeau's remarks sparked speculation that Canada, a participant in the new USMCA pact — formerly known as NAFTA, might be seeking to become a trade intermediary between China and the US, as trade tensions between the two countries have escalated.

Speaking at the ASEAN forum in Singapore Thursday, the Canadian Prime Minister said he would work with Chinese officials to facilitate and deepen the bilateral economic cooperation.

"We talked about deepening trade ties, increasing flows of goods and services between Canada and China for the benefit of citizens and businesses on both sides," Trudeau said.

His statement comes after Trudeau said he wants a broader free trade framework with 10 South East Asian countries — which could be a potential replacement for the Trans-Pacific Partnership deal, terminated by the US last year.

"Canada is resolutely pro-trade and Canada is very aware that the centre of economic gravity in the world is certainly shifting towards Asia and specifically towards South East Asia," Trudeau said.

Trudeau said trade talks with 10 ASEAN nations could start as soon as in the spring of 2019. The bloc encompasses the Philippines, Indonesia, Brunei, Singapore, Malaysia, Thailand, Vietnam, Laos, Cambodia, and Myanmar.

© REUTERS / Chris Bolin
Trudeau Confirms Canadian Intelligence Heard Audio Tapes of Khashoggi Murder
Some 650 mln people live across these countries, while the total economic output of the bloc stands at roughly $2.8 trln — compared to Canada's population of 36.7 mln, and total GDP of some $1.7 trln.

Economists said Canada might be seeking to boost its exports of agricultural goods into the rapidly growing ASEAN region — particularly so given the recent changes in Ottawa's trading relations with its immediate southern neighbour.

US President Donald Trump said under USMCA, the bilateral trade in agricultural goods has become fairer for the US — meaning Canadian food producers are now seeking new export markets.

READ MORE: Trudeau Says Canada Could Ratify New NAFTA Even With US Tariffs on Metals

For its part, China has expressed interest in a deeper trading relationship with Canada as well. Trudeau and Chinese President Xi Jinping met last December, but the two officials have yet to coordinate the start of free trade talks.

This time, Trudeau met with Chinese Premier Li Keqiang, and the sides expressed their joint commitment to exploring ways towards striking a mutually-beneficial trade agreement.

"We are meeting on the heels of some very successful economic meetings in Beijing," Trudeau said to Li. "We will continue to talk in a frank and open way about… issues that are important to people in both our countries."

In a separate statement following their meeting, Canadian officials said Trudeau and Li have on comprehensive discussion on bilateral ties, issues on human rights, and China's domestic policies.

© AFP 2020 / Erik DE CASTRO/POOL
US to Push for Binding Code of Conduct on S China Sea at ASEAN Summit - Official
Over the past few weeks, Ottawa has expressed concern over Beijing's alleged harsh treatment of the Muslim Uyghur minority in the Xinjiang province — and Canadian officials suggested the sides need to achieve a mutual understanding on the matter before any free trade talks could commence.

Meanwhile, the economic cooperation between Canada and China has gradually advanced over the past few days. On Wednesday, Canadian officials took part in the Singapore FinTech Festival, helping promote 20 companies from three provinces among Asian investors.

Additionally, at last week's China International Import Expo, 48 Canadian enterprises — mostly, from the manufacturing and agricultural sectors — signed $1.67 bln worth of commercial deals with Chinese importers. Canadian officials also stressed they are seeking to double Canada's agricultural exports to China by the year 2025.

"There's been a great deal of progress, but let's remember that trade is not an event. It's not a day. It's a continuum of conversations," Jim Carr, Canada's Minister for International Trade Diversification, said.

The Canadian and Chinese officials also reiterated their commitment to conducting bilateral trade in line with the World Trade Organisation (WTO) rules, aimed at ensuring free and unrestricted trade.

The sides have yet to announce any practical results of their trade consultations.