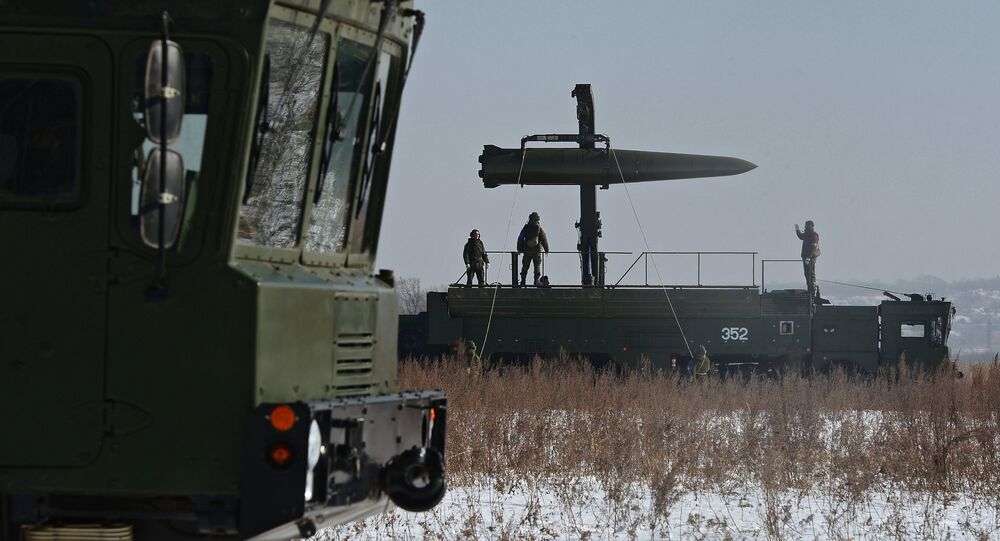 Washington has not yet formally begun to implement the procedure for withdrawing from the 1987 Intermediate-Range Nuclear Forces Treaty (INF) arms control agreement, Sergei Lavrov said on Monday.

"The treaty itself contains a procedure which provides for the possibility of withdrawing from the treaty. But this procedure hasn't yet been triggered," the foreign minister explained, adding that Moscow's response would be forthcoming after it receives clarification from its US counterparts. Russia will "decide on our position based not on intentions, but on clearly expressed decisions," Lavrov stressed.

Commenting on the possible US withdrawal from the treaty, Lavrov reiterated that a decision to do so would be met with firm opposition from Moscow.

"Of course, as we have stated repeatedly, and President Putin has confirmed at the Valdai Forum in Sochi, any action in this area would be met with counteraction, because strategic stability can only be achieved on the basis of parity. Such parity will be preserved in all circumstances. We are responsible for global stability, and hope that the United States will not give up its share of responsibility as well," the top Russian diplomat said.

© AFP 2021 / ludovic MARIN
Macron Stresses Importance of INF Treaty for EU Security in Call With Trump
Lavrov also said that Russia was ready to renew discussion on the New START Treaty, and was prepared for dialogue with Washington on the issue. However, all issues, whether relating to the New START or the INF, should be discussed in a "professional" manner "in accordance with the procedures that are stipulated by each of these treaties," he said.

For his part, Russian presidential spokesman Dmitry Peskov categorically rejected Washington's claims that Moscow was violating the provisions of the INF.

"On the contrary, quite expertly at various levels, we have provided evidence that it was the United States which has been eroding the foundations and main provisions of this treaty — installing missile defences which can serve not only as interceptors, but also as short and medium-range missiles, using strike drones which de-facto serve as nothing other than short-range and medium-range missiles," Peskov said, presumably referring to US missile shield installations in Romania and Poland.

Peskov added that Russia "has been and remains committed to the provisions of [the INF] treaty. And we believe that the [US] intention to withdraw from this document is cause for concern, because such steps, if implemented, will make the world a more dangerous place."

© CC BY-SA 4.0 / Max12Max / Chinese Foreign Ministry
Unilateral US Withdrawal From INF Treaty Will Have Multilateral Negative Impact - Beijing
Asked about President Putin's recent remark about Russians 'going to heaven as martyrs' in the event of nuclear aggression against Russia, Peskov said that it was meant to emphasize the inadmissability of a preemptive nuclear strike in Russian nuclear doctrine. "It was not about heaven mainly or about who goes where, but, and this is most important and was missed by some, about the fact that at the doctrinal level, Russia does not reserve the right to stage preemptive strikes," the spokesman explained. "That is, we will never attack anyone first; this is what the president said. But if we are attacked, then everyone will go somewhere — someone to hell, someone to heaven, and so on. That was the main point, the rest was just allegorical," he added.

Speaking about Russia's nuclear doctrine in Sochi last week, President Putin said that "the aggressor must know that retribution is inevitable," and that Russians, as "the victims of aggression, will go to heaven as martyrs, while [the aggressors] will simply die, because they will not even have time to repent" in the event of a nuclear war.

Emphasizing that a US withdrawal from the INF would "make the world more dangerous," Peskov said that Russia would have to take measures "to restore balance" if the US openly began to develop the classes of missiles presently banned under the treaty.

© AFP 2021 / Jerome Delay
What You Need to Know About Nuclear Arms Treaty With Russia Trump Wants to Quit
President Trump announced his intention to scrap the INF Treaty on Saturday, accusing Russia of violating the agreement's terms and saying the US would start to develop the weapon classes presently banned under the treaty. Moscow, Berlin, Rome and Paris have slammed Washington's statement of intent, urging Washington to consider the consequences of withdrawal for European and global security.

Signed in 1987 at the twilight of the Cold War, the INF Treaty was aimed primarily at reducing the risk of nuclear war in Europe, and committed the US and the USSR (and since 1991, Russia) to terminating their stocks of missiles and land-based launchers with ranges between 500 and 1,000 km and 1,000 and 5,500 km, respectively, and prohibited the missile technologies' development. The treaty resulted in the destruction of nearly 2,700 missiles by the treaty-imposed deadline in mid-1991.

Under the treaty's terms, the US would have a six-month period to withdraw after providing official notice.