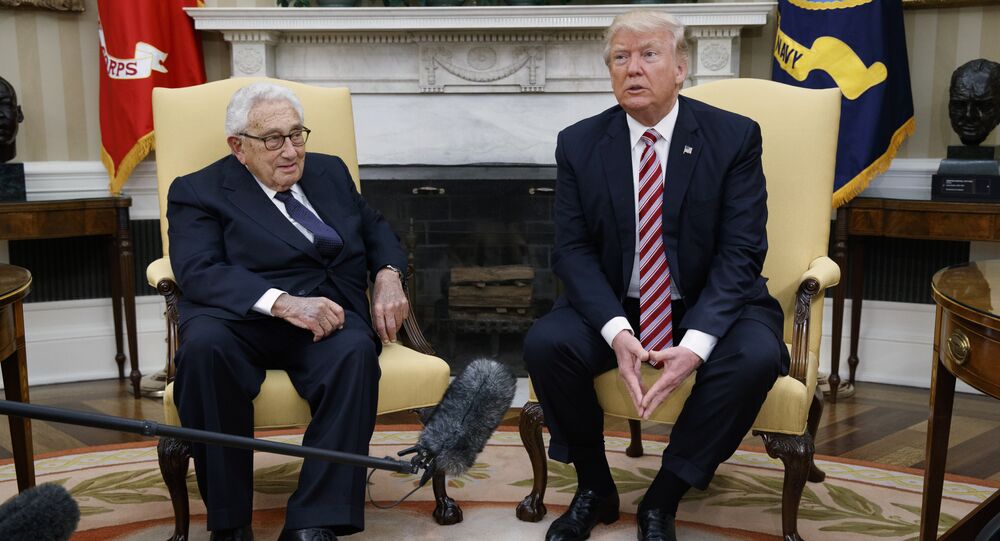 The former secretary of state is best known for his concept of triangular diplomacy, which Washington used during the Nixon administration in the 1970s to break the Sino-Soviet alliance and to improve US relations with Beijing.

Henry Kissinger advised President Donald Trump to try to improve relations with Russia in a bid to try to isolate China during the presidential transition in late 2016 and early 2017, five sources said have been briefed on Kissinger's discussions with the president told The Daily Beast.

A source told the outlet that "looking out over [the] long term, there is a belief in the administration that Moscow will see Beijing as its greatest geopolitical foe – just like Washington does now – and that could set up a rapprochement with America."

© Sputnik / Sergey Guneyev
‘I Understand the Game You’re Playing’: Pompeo Tight-Lipped in Senate Grilling, Defends Trump’s Right to Private Talks
"But it is very far out into the future," the source added.

Kissinger voiced his support for last week's summit between President Putin and President Trump in Helsinki, but lamented that the meeting had been "submerged by American domestic issues."

"It was a meeting that had to take place. I have advocated it for several years," Kissinger said. Stressing that nations today face a "very, very grave period for the world," the former secretary of state said that Trump "may be one of those figures in history who appears from time to time to mark the end of an era and to force it to give up its old pretenses."

According to The Daily Beast's sources, US strategists promoting a pivot toward Russia were also looking to engage the Philippines, India, Japan, Middle Eastern countries and other actors to serve as a "counterweight" to the presumed Chinese threat to US hegemony.

© REUTERS / Kevin Lamarque
Bolton: Trump Wants to Meet Putin Next Year, 'After Russia Witch Hunt is Over'
The practicality of Kissinger's vision of turning Russia against China is questionable. Last month, President Putin paid a state visit to Beijing on the invitation of President Xi, where he said that cooperation with the People's Republic had reached "an unprecedented level." In Beijing, Putin signed numerous economic agreements and treaties on cooperation in nuclear power, space, and the Arctic. Moscow and Beijing also announced their intention to deepen strategic cooperation and coordination in the face of a "complex international situation."

Following last week's summit between Putin and Trump, a former Trump administration official told the outlet that the president was trying to pull a reverse "Nixon-China play." The official added that Russia and China were "cozying up to each other," and warned that it would be "a lethal combination" for the United States "if they're together."

Relations between the US and China have suffered a hit under Trump's presidency, with long-term tensions over the South China Sea exacerbated by the trade war launched by the president in a bid to improve the trade balance. The Chinese government has condemned Washington's tariff policy and vowed to respond in kind. Trump had attacked China over trade throughout his 2016 presidential campaign.

Iranian Commander to Trump: You Will Start War, We Will End It

Trump is Causing the Chinese Currency Drop He Decries - Expert