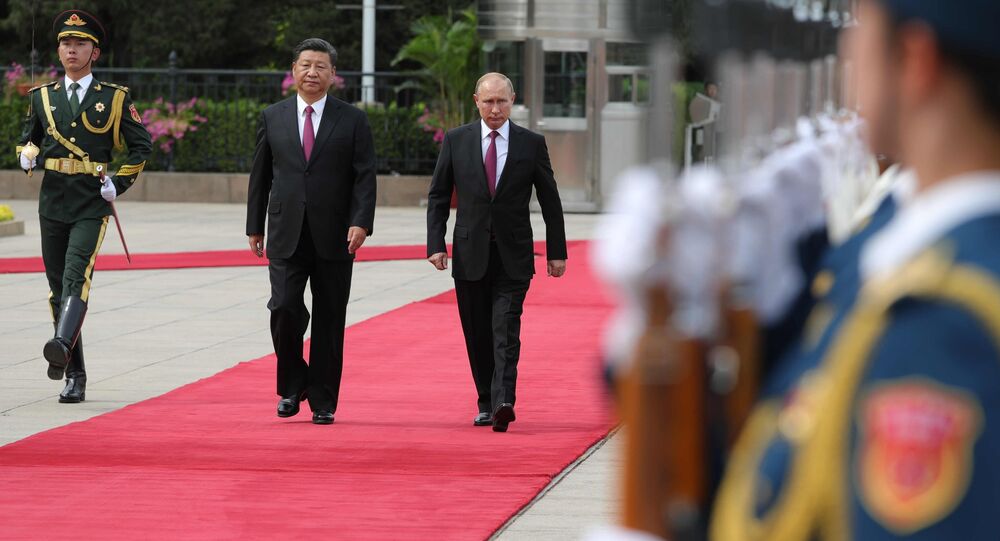 President Putin's June 8 visit to Beijing saw the signing of multiple agreements on oil and gas development, nuclear power, space, finance, as well as promises to deepen strategic cooperation and coordination in the face of "a complex international situation." Speaking to Sputnik, Chinese and Russian observers outlined the scope of the agreements.

But the breadth of the two leaders' discussions went far beyond that.

"It is becoming deeper, and the areas of cooperation are expanding…. This cooperation will ensure that in the future, China and Russia will take the leading positions in the world in the fields of space and new energy. These industries are at the forefront of a new technological revolution, of advanced scientific research." This, Wu stressed, was the most important tangible result of Putin's visit.

Another promising direction for Russian-Chinese cooperation is the Arctic. In their joint statement, Putin and Xi expressed an interest in infrastructure, transport and energy projects, and the development of the Northern Sea Route shipping lane in Russia's north.

"This cooperation has two components," Sergunin explained. "One is China's further participation in the development of the oil and gas sector, specifically with the second stage of the Yamal-LNG-1 plant in Sabetta. The second element is the modernization of port infrastructure along the Northern Sea Route. Today, this infrastructure requires deep modernization. Our Chinese partners have an interest in participating in the development of the gas fields of Yamal, and the reconstruction of the deep-water ports of Murmansk and Arkhangelsk. Negotiations on these issues are underway."

© Sputnik / Evgeny Yepanchintsev
The northwestern Russian city of Murmansk and its port facilities.

In Sergunin's view, Putin and Xi's statement of intent on the Arctic issue "reflects their intention to provide the political impulse to accelerate the development of Russian-Chinese cooperation in the Arctic. The Chinese side's interest is obvious; it would mean additional Russian gas from the Arctic, as well as the expansion of commercial transportation along the Northern Sea Route."

Sky's Not the Limit

© Sputnik / Mikhail Klimentiev
First Day of Putin's Visit to China Yields Numerous Agreements
The Putin-Xi memorandum also speaks of the intention of both countries to cooperate in the study of the moon and deep space and of both sides' opposition to the deployment of weapons in outer space.

Speaking to Sputnik, military observer and China specialist Vladimir Evseyev said that the latter point was particularly significant, given the danger of a US effort to undermine strategic stability through the deployment of space-based weapons.

"The deployment of American weapons in outer space is only a matter of political decision-making; the US already has the technical capabilities to do so," Evseyev emphasized. "With this in mind, Russia and China are actively working to counter the possible deployment of weapons in space, and to reduce the effectiveness of their use via the liquidation or blocking of any American space-based grouping."

According to the military analyst, Moscow and Beijing can negotiate with Washington on this issue only if they have the defensive deterrent potential to do so. "By carrying out work on anti-satellite weapons, holding negotiations at various international venues, and proposing a convention to prohibit the deployment of weapons in outer space, Russia and China have the opportunity to act in concert to prevent the US from doing so."

© AP Photo / Cai Yang/Xinhua via AP
In this photo provided by China's official Xinhua News Agency, a Long March-4C rocket carrying a relay satellite, named Queqiao (Magpie Bridge), is launched from southwest China's Xichang Satellite Launch Center, Monday, May 21, 2018. China has launched a relay satellite as part of a groundbreaking program to land a probe on the far side of the moon this year. The China National Space Administration said on its website that the satellite lofted into space early Monday aboard a Long March-4C rocket will facilitate communication between controllers on Earth and the Chang'e 4 mission.

Other subjects broached at the joint press conference between Putin and Xi on Friday included the announcement of their commitment to support a sensible reform of the UN, including the Security Council. The countries also agreed to stand against unilateral economic sanctions, against the violation of the strategic balance in the sphere of missile defense, against interference in the affairs of other states, and in favor of international cooperation against terrorism. The two countries also reaffirmed their intention to cooperate in the post-war reconstruction of Syria and stressed the need to coordinate efforts to resolve the Korean nuclear issue.

Commenting on the outcome of the summit, Dr. Wu pointed to Putin's sentiment that relations between China and Russia were "unique."

"In my understanding, the characterization of 'unique' implies the following: to a certain extent, Chinese-Russian relations today have transcended those of one country's relations with another. I can explain this in four concepts. The first is the idea of mutual trust – not just at the state level, but at the level of leaders and people. For example, President Xi celebrated President Putin's birthday. This goes beyond the scope of formal, protocol-based relations between leaders. Then there is the trust between peoples. Numerous sociological polls have shown that the countries Russians consider most friendly and close are China and Belarus. Similarly, the Chinese consider Russia to be the friendliest country."

"The second idea is mutual understanding," Dr. Wu continued. "Between friends, in addition to support, a deep understanding of one another is also very important. The countries understand each other, notwithstanding the problems that remain in their history, and do not allow these problems to be exacerbated. The third idea is mutual assistance. The countries support one another on issues requiring urgent solutions. This goes beyond mutual trade. … Finally, the fourth idea is love. Of course there is no place for 'love' in relations between countries, but between people there is. China and Russia value each other very highly … the countries show great respect for each other's political and ideological systems, even though this may not be an easy thing to do."

"This is how I understand the 'unique' nature of Chinese-Russian relations," the academic concluded.

The views and opinions expressed by Wu Enyuan, Alexander Sergunin and Vladimir Evseyev are those of the experts and do not necessarily reflect those of Sputnik.