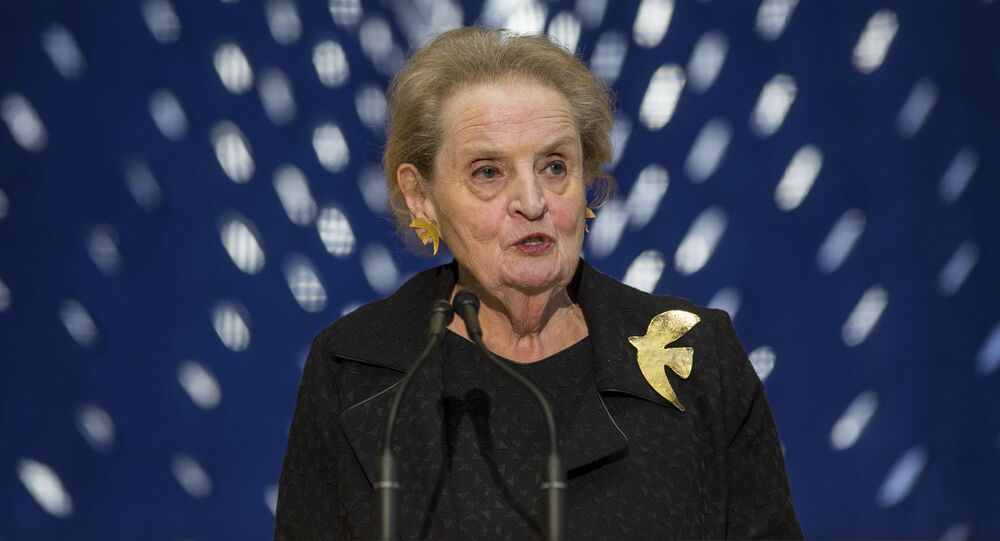 Madeleine Albright's remarks blasting the president over his performance in Helsinki are the latest in her long-running feud with Donald Trump.

"I think Trump is the gift that keeps giving to Putin," Albright said, speaking to MSNBC's Morning Joe.

Claiming that the president "doesn't understand what his responsibilities are as the president of the United States," the octogenarian former secretary of state said she was most concerned about "what went on in that meeting where nobody [else] was [present]."

© AP Photo / Manuel Balce Ceneta
'Most Dangerous Sec. of State Ever': Twitter Pans Albright After She Calls Trump ‘Most Undemocratic' US President
"I found very interesting in the picture before they go in to their private meeting is Putin is sitting there with a pad of paper. I've been with Putin. He takes notes. He is very smart, and there is no idea what President Trump did in there, and what he promised, and revealed."

Albright called on Congress to take "more action," "especially in foreign policy," to get explanations from Trump on policy. She also suggested that members of the Trump administration themselves "need to recognize that they took an oath of office to protect the Constitution."

"Because somebody needs to make it clear to President Trump that his behavior in that press conference was un-American, outrageous, ridiculous, stupid, I can't even think of all the adjectives that I think should be attributed to that behavior," she said.

Albright, who presided over the 1999 bombing of Yugoslavia and insisted that the death of half a million Iraqi children due to US sanctions was "worth it," also went on to rant about the Russian president. "Putin has a plan. He wants to undermine democracy. He wants to separate us from our allies in Europe. He wants to reassert influence in the Middle East. And our president is a help in all of this. There is a term that the Russians use. It's called 'useful idiot.' I do think that whatever President Trump thought he was saying, he definitely helped Putin's plans for getting back into the game, and for undermining democracy in Europe. We cannot allow that to happen," the Clinton-era official emphasized.

A long-time Trump foe, Albright has accused him of bolstering fascism worldwide, suggested that he is "the most undemocratic present in modern American history," and argued that there was a "special place in hell" for women who didn't vote for Hillary Clinton. Her latest remarks didn't exactly surprise many Twitter users.

like the gift of war crimes? no wait, that was you.

Same old "special place in hell" Albright, huh? I love it when you remind me why I didn't vote for HRC.

Oh then why not restart the Cold War, Libs?

Has Trump “given” Russia Crimea, uranium, Georgia, or bases in the Middle East? Or just rosey words?

Oh, I'm sorry, did @realDonaldTrump not fall into your #FakeNews Bullshit. I want the USA to get along and work with Russia. The greatest danger the USA faces today is the lying corrupt #FakeNewsMedia, Democrats and #DeepState

© REUTERS / Leonhard Foeger
Trump on Twitter: 'Putin and I Got Along Well Which Truly Bothered Many Haters'
Albright was just one of dozens of current and former hawkish US officials who attacked the president over the Helsinki trip. Ex-CIA chief John Brennan called Trump's performance "treasonous" and said the president was "in the pocket" of President Putin. Arizona Senator John McCain called the summit "a tragic mistake." Former US ambassador to Russia, Michael McFaul, slammed Trump for trying to let bygones be bygones and improve the relationship between Moscow and Washington. Finally, Lindsey Graham suggested that the soccer ball Putin gifted to Trump should be checked "for listening devices" and kept out of the White House. Trump responded to "haters" by saying that they were just mad that he didn't turn the summit into a "boxing match."

Presidents Putin and Trump met in Helsinki on Monday in a bid to improve strained relations and find areas where the nuclear powers can cooperate. In their private two-hour meeting, the leaders discussed nuclear proliferation, Syria, Iran, Ukraine, economic cooperation and other issues. The presidents labeled the talks "successful," "productive," and essential for improving ties. They agreed that there were "no objective reasons" for tensions.

Twitter Pans Albright After She Calls Trump ‘Most Undemocratic' US President

Madeleine 'Worth It' Albright Accuses Trump of Bolstering Fascism Worldwide