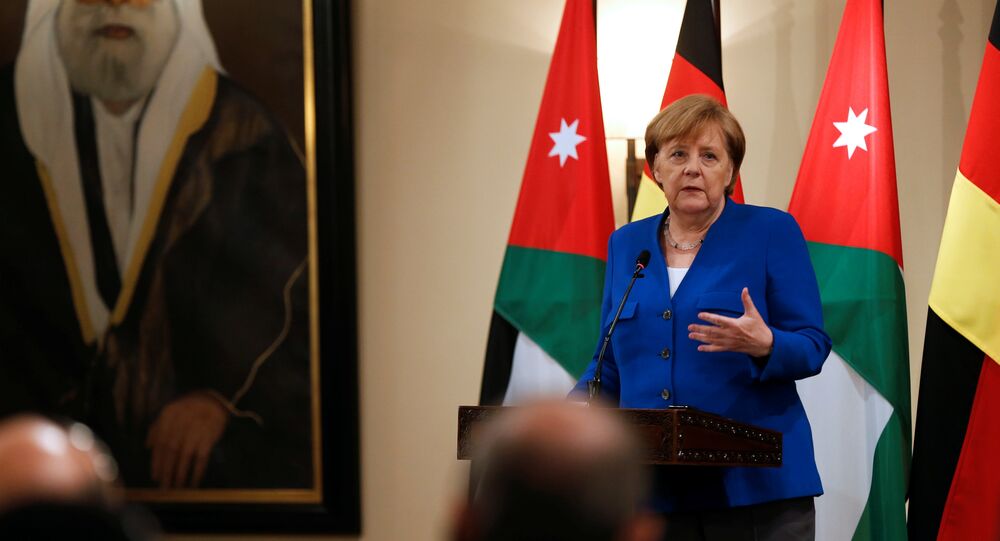 German Chancellor Angela Merkel during her official visit to Jordan has supported the US stance on Iran, speaking about the country's alleged "aggressive tendencies."

German Chancellor Angela Merkel stated Thursday, after her talks with Jordanian King Abdullah, that Iran's "aggressive tendencies" should be countered.

At the moment, Merkel is paying an official visit to Jordan, one of Germany's most important trading partners, along with Italy, accompanied by a delegation of German parliamentarians and businesspeople.

© AP Photo / Ronald Zak
'New Image of the US Will Emerge': Iran’s Zarif Vows Cooperation With Washington if It Returns to Nuke Deal
A similar tough position on Iran is maintained by the United States, Israel and a number of other countries, which claim Tehran to be a potential threat to Middle East peace processes and accuse it of allegedly supporting terrorists in the region. These accusations, however, have never been supported by substantial evidence.

READ MORE: US Lawmakers Warn of Potential Conflict With Iran After Exit From Nuclear Deal © AFP 2018 / IIPA/ALI MOHAMMADI
US

Apart from that, both Israeli and US authorities have accused Iran of having a military presence in Syria and of even having a base there. Iran has repeatedly refuted the claims, calling them groundless, while admitting that is has sent military advisers to train troops loyal to Damascus. Israel views Iranian activities as a threat to the country's national security and constantly warns that Iran is allegedly building a permanent military base south of country's capital, Damascus.