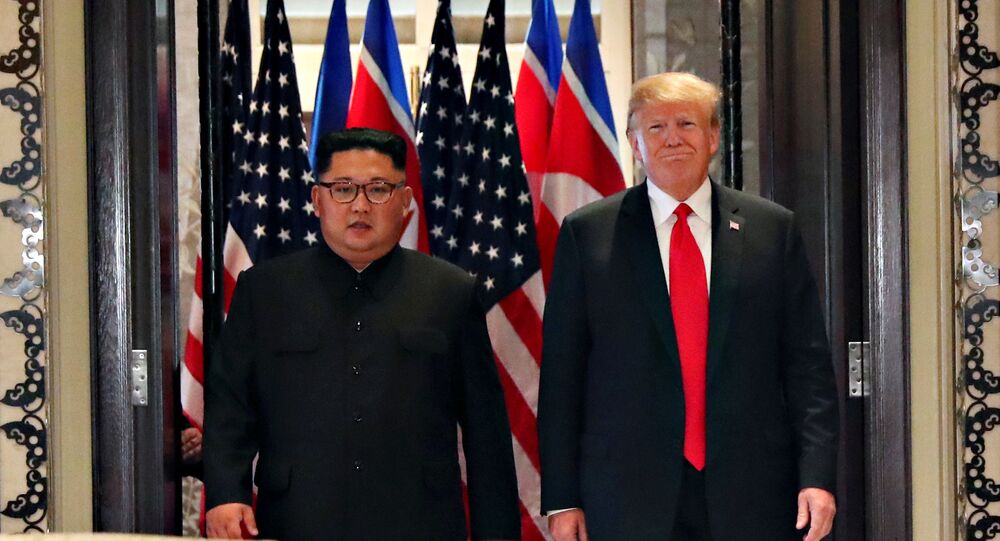 Pompeo: US Hopes for Denuclearization of Korean Peninsula Within 2.5 Years

Pompeo said during his visit in Seoul on Wednesday that the United States hopes North Korea will denuclearize by the end of US President Donald Trump’s first term of presidency, ABC News reported.

"Major disarmament… We're hopeful that we can achieve that in the two and half years," he stated, adding that there is "a lot of work left to do".

"Let me assure you that 'complete' encompasses verifiable in the minds of everyone concerned. One can't completely denuclearize without validating, authenticating," he said.

READ MORE: Why Trump-Kim Summit is 'Big Win' for China and Loss for EU

© REUTERS / Susan Walsh/Pool
Kim-Trump Summit Proved Putin Right, Only Dialogue Can Solve Crisis – Kremlin
The US top official defended Trump’s decision to unilaterally stop US military exercises with South Korea near the Korean peninsula by saying that the halt will only last as long as North Korea is participating in productive and good-faith negotiations.

The statements followed Tuesday's historic summit between Trump and Kim in Singapore, which resulted in the sides signing a final document that includes an agreement to establish new bilateral relations between the United States and North Korea as well as join efforts to build a lasting and stable peace regime on the Korean peninsula.

Moreover, North Korea reaffirmed under the terms of the agreement its commitment to denuclearize the Korean peninsula while the United States pledged to provide security guarantees.

Commenting on the results of the meeting upon his arrival in Washington, Donald Trump assured that the world could "sleep well" as both countries decided not to play "war games".

Just landed — a long trip, but everybody can now feel much safer than the day I took office. There is no longer a Nuclear Threat from North Korea. Meeting with Kim Jong Un was an interesting and very positive experience. North Korea has great potential for the future!