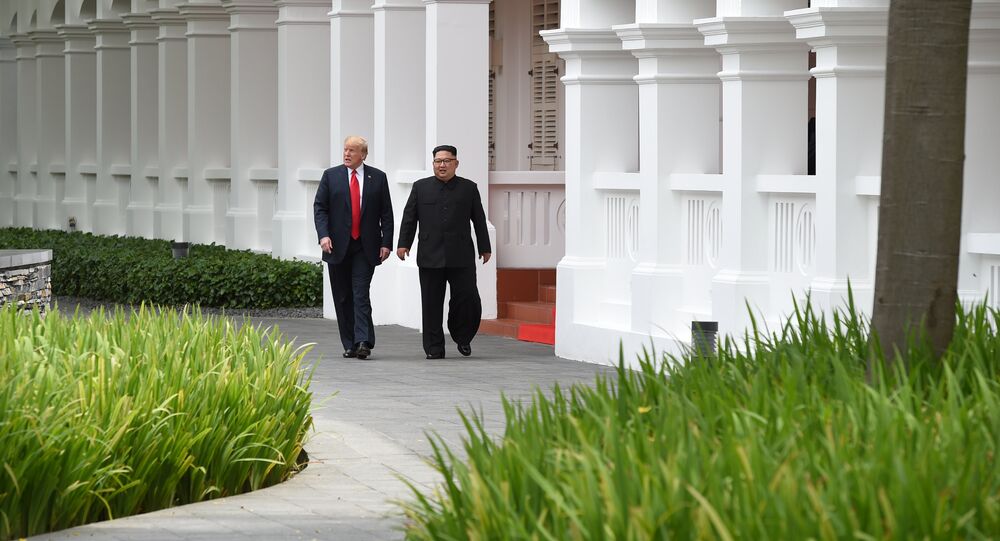 The June 12 meeting between US President Trump and North Korean leader Kim Jong-un may usher in a new era for the Asia-Pacific, CNTV Panview analyst Tom McGregor told Sputnik, predicting certain bumps in the road of the US-North Korean deal's implementation and explaining why the Singapore Summit means a big win for China.

"The Trump-Kim summit in Singapore on June 12 has emerged as an historic meeting for the ages that sets the stage for Asia to prevail as the powerhouse region for our world in the 21st century, while the United States remains actively engaged in partnership with the continent," says Tom McGregor political analyst and Asia-Pacific commentator for China's national TV broadcaster CNTV.

According to the Beijing-based analyst, Kim Jong-un's decisions to move forward on global peace "took tremendous courage on his part and he deserves praise for doing so."

At the same time, McGregor highlights that those "critics who are blasting [US President Donald] Trump for even holding dialogue with Kim are either blinded by political partisan lunacy or fail to comprehend why diplomacy should play a crucial role to resolve international disagreements."

"If Kim sought to keep his nukes, he would have no reason to meet Trump, face-to-face," the analyst, who has predicted from the outset that the historic meeting would take place against all odds, noted.  "You can't trump the Trump. He's from New York and earned billions of dollars making huge real estate business deals. Throughout his entire business career, he faced off against the toughest and smartest business people in the world. He won big on some deals and went bankrupt on others. So Trump knows how to negotiate and learned from his mistakes."

The commentator believes that the US president would never sign a denuclearization deal with Pyongyang unless "they consented to allow US nuclear inspectors to step into North Korea to investigate and witness verifiable proof Pyongyang is moving forward on denuclearization under a staged process."

On the other hand, for Kim it "is a significant move" that "will open the doors for economic cooperation and diplomatic opportunities with more countries."

"We will witness the dawn of a new North Korea that welcomes deeper ties with the US, South Korea, Japan and other nations," McGregor envisions.

Besides being "the moment of truth" for Kim, the historic deal also indicated "the beginning of the demise of the EU as a global power player," the commentator opined.

"Take a note that European Union member-states and all other Western countries outside Asia (except for Russia) had no engagement whatsoever with the talks," McGregor underscored. "A few days earlier Trump had departed from a G7 Summit in Canada without even signing a simple joint communique — that signals the EU is not worthy of consideration when addressing major diplomatic issues impacting the world at large."

© REUTERS / Susan Walsh/Pool
Kim-Trump Summit Proved Putin Right, Only Dialogue Can Solve Crisis – Kremlin
The analyst foresees that "the winds of power and fortune are shifting eastward to Asia."

"For the Asia-Pacific to step on the world stage in a grand manner, it's essential to resolve diplomatic tensions that could overshadow the Asia success story," he highlighted. "Asia-Pacific countries can generate momentum for global economic growth and diplomatic influence by ensuring peace on the Korean Peninsula and that can only move forward with full denuclearization there."

McGregor recalled that Trump's critics had been depicting gloomy scenarios for the Singapore Summit. Furthermore, the expected meeting has been repeatedly overshadowed by controversial and somewhat undiplomatic claims by the US president's aides.

© Sputnik / Iliya Pitalev
Analyst Explains 'Magic' in Trump's Letter to Kim, Moscow's Signal to N Korea
First, National Security Adviser John Bolton remarked that North Korea should go in the footsteps of Muammar Gaddafi's Libya during its denuclearization process, prompting outrage from Pyongyang and an exchange of tough statements between the two capitals.

Second, just a week before the historic summit, Trump's lawyer Rudy Giuliani claimed that "Kim Jong-un got back on his knees and begged for the meeting" after the US president cancelled it.

As it turned out, both claims had nothing to do with reality.

"The US wanted NK to de-nuclearize and Pyongyang wanted friendlier talks with Washington, as well as an end to US-SK war games (military drills) that are held annually. Both sides got what they wished for at the Singapore Summit and it's time for celebration," the Beijing-based commentator pointed out ridiculing those who continue to repeat their "mantra" that "Trump was fooled by the Rocket Man."

Bumps in the Road

Still, the analyst does not rule out certain bumps in the road during the implementation of the Trump-Kim deal.

"US Congress and Senate are the wild card here," McGregor believes. "The worst-case scenario being that Congress forces a legislative vote on the Trump-Kim agreement. NeverTrump Republicans are likely to align themselves with Democrats to vote against it. Such a scenario would destroy improved bilateral ties between the US and North Korea and Kim Jong-un would return to rebuilding his nuclear arsenal."

© REUTERS / Pool via Reuters
Trump-Kim Summit May Offer Fresh Assessment of DPRK-US Relations ‘Equities’, Analysts Say
However, according to the commentator, that would be nothing short of a "suicide" for the Republican Party ahead of the 2018 congressional elections.

He opined that the Singapore Summit "has just won American voters' hearts and they are likely to show their approval by voting in support of the Republican Party staying in power as the majority in US Congress and Senate in this year's mid-term elections."

"But you never know, the GOP-controlled Congress and Senate might sabotage themselves and seize defeat from the jaws of victory," the analyst added.

If Trump prevents them from doing "something stupid" the implementation of the US-North Korea agreement will move forward with fast and steady progress, he believes.

According to the analyst, Beijing could also be regarded as a "big winner," which has become a by-product of the Singapore Summit.

© REUTERS / Jonathan Ernst
China, Russia May Have Misgivings Over Trump-Kim Deal, Analysts Say
McGregor recalled that in 2017, the US president asked Chinese President Xi Jinping to help denuclearize the Korean Peninsula, dropping the hint that in exchange he would reduce trade pressure on Beijing.

Now, that the US and North Korea have struck a deal, one may expect Trump not moving forward on a trade war against China, McGregor suggested.

The analyst noted that to deescalate tensions in the region, Washington "should not meddle in diplomatic tensions over the South China Sea." And since Trump has stopped military drills on the doorstep of North Korea it would be wise "to also re-deploy the THAAD (Terminal High-Altitude Area Defense) outside of South Korea," McGregor stressed.

"Hence, the Singapore Summit should directly result in improved ties between Beijing and Washington, he added.

READ MORE: 'There is No Longer a Nuclear Threat From N Korea' — Trump

Kim in a 'More Sympathetic Light'

Commenting on the Trump-Kim summit, the commentator noted that the North Korean leader had appeared in a new light.

"While watching video footage of the Singapore Summit, I'm an expert on reading eyes and one of the first things that caught my attention was that Kim looked nervous and that he seemed worried something might go wrong. I see Kim in a more sympathetic light now," he said.

McGregor noted that Kim has taken a "huge gamble" to initiate reforms in his country. Referring to those who claim that the North Korean leader will go in the footsteps of his father and grandfather, who reneged on their prior agreements, the analyst opined that one should not be deluded into thinking that everything is determined by "blood."

"[Kim] wants to reform North Korea and is sincere in doing so. He will get support from Trump to boost the economy of his nation and the world should support that," McGregor emphasized, adding however, that one should "trust but verify."