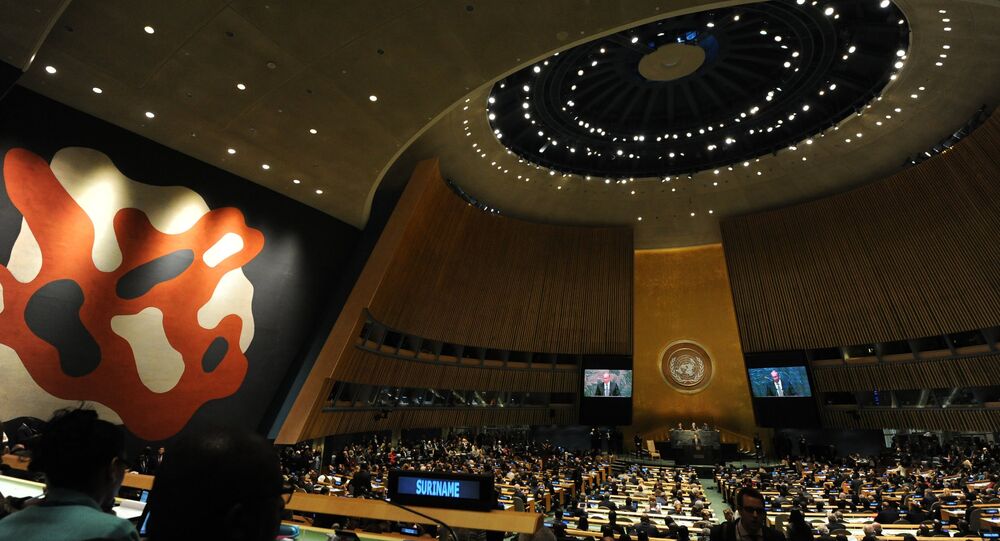 The crisis in Syria escalated in the wake of the reports about an alleged use of chemical weapons by government forces in the city of Douma in Eastern Ghouta on April 7, which triggered a massive coordinated airstrike, carried out by France, the United States, and the United Kingdom a week later.

According to The Guardian, Western nations are seeking to turn to Resolution 377A, commonly known as “Uniting for Peace,” granting the UN General Assembly special credentials to interfere in the matter, bypassing the Security Council, if its five permanent members cannot reach unanimity. Whereby, Western states would be able to override Russia’s veto on targeting Syria – Moscow’s inherent right as a permanent member of the Security Council which been applied over a dozen times.

“The Russian veto need not be the end of efforts for collective action by the UN. The responsibility of asserting accountability for the use of chemical weapons, and for bringing an end to the horrors of the Syrian conflict, rests with the world community as a whole,” Ian Martin, a former UN official and Amnesty International chief, told The Guardian.

On April 14, the United States, France, and the United Kingdom, bypassed the UN Security Council and launched joint missiles strikes on multiple targets in Syria as retaliation for the alleged use of chemical weapons by government forces in the city of Douma, Eastern Ghouta. The Syrian authorities have denied any involvement in the alleged chemical attack, denouncing it as a false flag, while Russia condemned the trilateral strikes, calling them an “act of aggression against a sovereign state.”

© AP Photo / Luca Bruno
White Helmets Exposed: Roger Waters Lifts Mask on ‘Influence Operation Driving Dirty War on Syria'
Days prior to the western attack, Russian Envoy to the UN Vassily Nebenzia had called for action to “avert the danger of war” amid reports that US President Donald Trump was mulling over possible missile strikes on Syria.

The veto mechanism of the UN Security Council has consistently been criticized for its failure to permit the timely intervention and resolution of many conflicts, including the ongoing war in Syria. These discussions on the UNSC’s effectiveness led to debates over a reform of the veto mechanism to increase responsiveness to international crises and security threats.

Some have suggested that it is essential to abolish the veto, while others say that limiting its use to key national security issues will be enough; the process will, however, take a great amount of time, with no guarantee that the P5 will accept any reform, undermining their exclusive right to a veto.