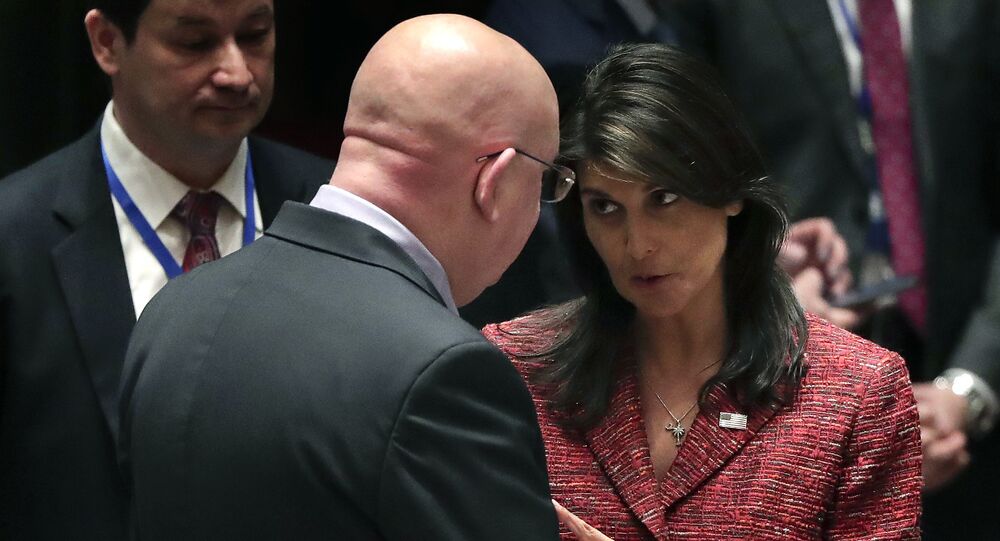 The United Nations Security Council has convened after the US, the UK and France had launched airstrikes at Syria in a move described as "brutal aggression" by Damascus. Moscow stated that the attack had been carried out initially on the eve of the arrival of OPCW experts to the Syrian capital who aimed to probe the alleged Douma chemical attack.

Russia: Strike on Syria 'Act of Aggression' Against Sovereign State

Speaking on the missile strikes, the Russian ambassador to the UN, Vasily Nebenzya, said Moscow condemns the attack, adding that Washington, London, and Paris disregarded calls for common sense and international laws by conducting airstrikes against Syria. He added that the US actions have lead to a deterioration of the humanitarian situation in Syria.

"Your aggression is a major threat to the possibility of continuing the political process under the UN auspices," he said.

Nebenzia added that the "scientific facilities [targeted] in Syria are used only for peaceful activity which is aimed at enhancing the effectiveness of economic activity in Syria."

Having described the attacks as an act of "hooliganism in the international arena," Nebenzia stressed that Washington has undermined its bid to broker the deal for the Syrian peace process.

© Sputnik / Aleksey Nikolskyi
Lavrov: Macron Refused to Share "Proof" of Alleged Syria Chemical Attack With Putin
At the same time, Nnebenzia said Russia has done everything possible to convince the US to refrain from its military plans in Syria.

Russia has also introduced a draft resolution condemning the missile strikes against the Syrian targets and called on the US and its allies to immediately stop the aggression, according to the Russian mission to the UN. The document qualifies the attack as a violation of international law and the UN's charter.

US: "We're Locked and Loaded" for New Strikes Against Syria

The US ambassador to the UN, Nikki Haley, said the strikes were carefully planned to minimize civilian casualties, describing the attack as a “justified, legitimate, and proportionate” response to the alleged chemical attack.

"We are confident that we have crippled Syria's chemical weapons program. We are prepared to sustain this pressure if the Syrian regime is foolish enough to test our will," she said.

She added that the Syrian regime used chemical weapons in Douma on April 7, adding that clear data demonstrates Assad's "culpability." Citing President Trump, Haley said that if Syria uses poison gas again, the US is "locked and loaded" to strike Syria again.

© REUTERS / UK MOD Crown 2018
Pentagon Claims US Missile Attack in Syria Hit Every Target, Went Without Military Response
"When our president draws a red line, our president enforces the red line," she said in reference to Trump.

The Syrian ambassador to the UN, Bashar Jaafari, has said that the strikes were aimed at undermining the work of the OPCW team in the country that was scheduled to inspect the site of the alleged chemical attack in Douma.

"The attempts of Washington, London and Paris to undermine the activities of the OPCW mission are systematic. Despite the fact that these three countries state that they work together with this group at the same time they exert pressure behind closed doors of this organization in order to prevent these groups and commissions from fulfilling the tasks, they have been established for," Jaafari said at the session of the UN Security Council (UNSC).

Jaafari said that it was surprising that if the representatives of the three western states had been aware of the alleged presence of the facilities, which they claimed were linked with chemical weapons production, why they had not informed the OPCW about this fact.

He said that the missiles had been partially downed, adding that three people were wounded and material damage was inflicted as a result of the strikes against the Syrian targets.

Speaking on the attack on Syria, British UN Envoy Karen Pierce has said: "It cannot be illegal to use force to prevent the killing of such numbers of innocent people," she said in reference to the alleged chemical attack. At the same time, she said that the three states that had carried out the attack will continue to press for the "diplomatic solution" in Syria.

"Full assessment is not yet being completed, but we believe the strikes to be successful," Pierce stated.

Pierce also said that no other group than the Syrian government could carry out the chemical attack in Douma.

© AP Photo / Susan Walsh
Illegal, Reckless or Blessed, Morally Justified? US Congress Split Over Attacks on Syria
French UN Ambassador Francois Delattre said Paris has no doubt that the Syrian government was responsible for the chemical attacks. He urged Moscow to call on Damascus to put an end to the suffering of Syrians.

Delattre also added that France, the UK and the US would submit a new resolution on Syria.