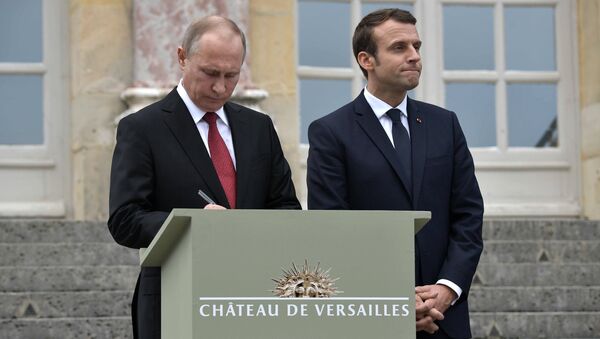 The US, Britain and France made a decision to fire over 100 missiles at Syria as a punitive strike over Damascus' suspected usage of chemical weapons, however, the probe has only just started and no solid proof has been yet presented by the West.

Russian Foreign Minister Sergei Lavrov stated that in a conversation with Russian President Vladimir Putin, France's President Emmanuel Macron refused to reveal what France says is "irrefutable evidence" of Damascus' involvement in an alleged chemical incident in Ghouta. The top diplomat also pointed out that there was an agreement on sending French experts to the scene of suspected chemical weapons attack in Damascus' suburb, however, "nobody contacted the Russian Defense Ministry since then."

READ MORE: Russian FM: BZ Substance Possessed by UK, US Believed to Be Used in Salisbury

The minister concluded that the Western countries attacked Syria intentionally ahead of the start of the Organization for the Prohibition of Chemical Weapons (OPCW) inspector's activities in Douma, trying to obstruct the probe. He went on saying that the West's only justification of its strikes against Syria are reports from media and social networks.

US Strikes Another Attempt to Oust Assad

"From a diplomatic point of view, this [missile strike on Syria] is, of course, a blow that was delivered on the geographical point on the map, but it is also a blow to the international law and the whole system of international relations," Foreign Ministry's spokeswoman Maria Zakharova said.

She described the strikes against Syria carried out by the United States, the United Kingdom and France as a new attempt to oust Syrian President Bashar al-Assad. The spokeswoman also said that the reason behind the attack was likely an attempt to revive the idea of the "Arab Spring."

The ministry has strongly condemned the US-led military action against Syria, calling it an "act of aggression," which violates the UN Charter.

The genuine aim behind the US-led attack on Syria was to "allow terrorists to rest, restore their forces and extend bloodshed," the ministry said, referring to the fact that the strike was carried out "at the time when Syrian troops were further taking a successful offensive against Daesh*, al-Nusra Front and other terrorist groups."

According to the Foreign Ministry, the West hides behind the humanitarian rhetoric and attempts to justify its military presence in Syria with the necessity to fight terrorism, but in fact, together with the militants works for the dissolution of Syria.

"The strikes were conducted at the time when the experts from the OPCW were due to travel to Douma in a bid to establish the truth. That is why there is a good reason to believe that the purpose of the attack on the Syrian Arab Republic was to obstruct the work of the OPCW inspectors," the ministry's statement says.

US Contacted Russia Before Striking Syria to Avoid Casualities - Envoy to Moscow
In addition, the statement concludes that the overnight missile strikes undermine efforts to promote the political settlement in war-torn Syria.

Earlier in the day, Russian President Vladimir Putin vehemently condemned the US-led missile strikes against Syria, which "aggravate humanitarian catastrophe, inflict suffering on the civilian population and connive at terrorism."