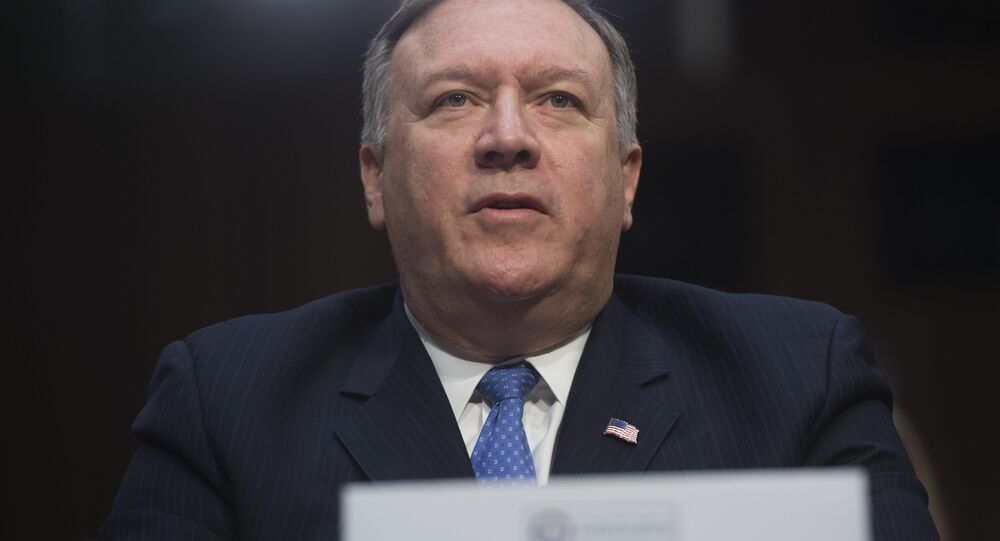 US CIA Director Mike Pompeo has called for strict measures against what he called a "failed state" of Syria amid claims of a chemical attack in Douma, blamed on Damascus by Washington and its allies.

Pompeo appeared before a Senate Committee on Thursday as part of the confirmation process for his nomination as secretary of state. He is currently the director of the Central Intelligence Agency (CIA).

"The failed state of Syria poses a mounting threat to human rights, national security, and regional stability - and it deserves an increasingly severe response," Pompeo stated in front of the Senate committee.

"I have not given that question any thought. My instincts tell me 'no,'" Pompeo told the US Senate Foreign Relations Committee when asked whether he would resign if Trump fired the special counsel or interfered with the investigation into allegations of Trump-Russia collusion by firing Rosenstein.

Pompeo noted: "My instincts tell me that my obligation to continue to serve as America’s senior diplomat will be more important at increased times of political domestic turmoil."

The tough rhetoric on Syria from the state secretary nominee follows US President Donald Trump's April 11 "Twitter diplomacy": on his social media page he urged Russia to "get ready" for "nice and new and smart" missiles in Syria. After almost 24 hours, he backed out, saying that he "never said when an attack on Syria would take place."

Kremlin spokesman Dmitry Pesov promptly responded to this discourse, saying that Moscow doesn't support "Twitter diplomacy" and called for a more serious approach to the issue to avoid escalating an "already fragile situation."

The situation around Syria has further escalated over reports that emerged in Syrian opposition media outlets on April 7, which claimed that the country's government had used chemical weapons in the city of Douma. The publications soon were picked up by the White Helmets, who began posting unverified footage of the aftermath of the alleged attack, claiming that up to 70 people had died of "widespread suffocation."

Reacting to these reports, the United States and its allies accused Syrian government forces of using chemical weapons, explaining that Damascus allegedly had a history of using such weapons. Donald Trump has also blamed Russia and Iran for supporting Syrian President Bashar Assad.

Both Damascus and Moscow have refuted all the allegations, calling for a thorough probe into the incident. The Syrian side cited Red Crescent reports, which confirmed that no chemical attacks had taken place in the area.

Moscow, in its turn, sent specialists from the Russian Reconciliation Center to the site immediately after the alleged chemical attack. The experts didn't find signs of nerve agents and chlorine-containing poisonous substances.

Pompeo on Relations With Russia

The US secretary of state nominee touched upon the issue of relations with Russia speaking in front of the Senate committee.

"If I am confirmed as the Secretary of State, I can assure you this administration will continue, as it has for the past 15 months, to take real actions to push back, to reset the deterrence relationship with respect to Russia," Pompeo stated.

The relations between Washington and Moscow have been tense within the last several years: at first, the escalation was reasoned by Crimea's reunification with Russia, condemned by the US and then after Washington accused Moscow of meddling in its 2016 presidential election. The latter became one of the most high-profile cases, with US authorities investigating alleged Russian meddling at various levels.

Moscow has repeatedly refuted allegations of interference in elections, noting that no proof of its involvement in such activities had ever been provided.