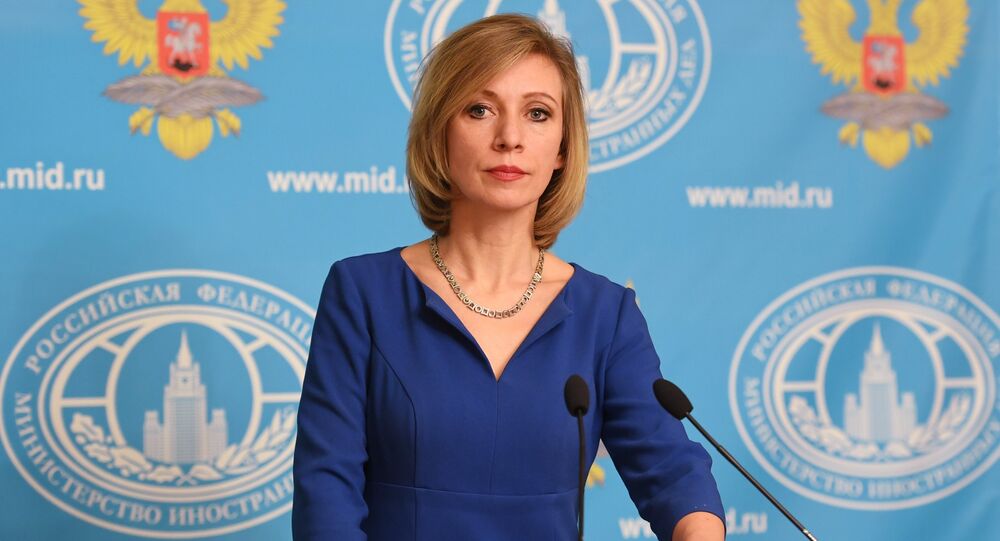 Russia is outraged that the US security services give to mass media data on bank transactions of the Russian diplomatic missions to mass media, the Russian Foregn Ministry spokeswoman Maria Zakharova told journalists at her weekly press briefing.

"The US security services giving to the media data on banking transactions of the Russian diplomatic missions, not only in the United States, but around the world," Zakharova said.

She called on the US authorities to "stop playing such games and return to normal, responsible diplomatic communications."

Earlier this week the BuzzFeed portal reported that the Federal Bureau of Investigation was scrutinizing more than 60 money transfers of the Russian Foreign Ministry to the country’s embassies, with a note saying that the funds were to be used "to finance election campaign of 2016."

Moscow has also called on the US authorities to stop exerting pressure on the Russian diplomatic missions in the US.

“We were forced to take these steps, these response measures in light of the blatantly repressive actions, steps against Russian media, first of all Russia Today [RT’s former name] television channel,” she told journalists.

On Relations With Spain

"It would be preferable if our Spanish colleagues started being responsible for their words and provided specific facts," she told a briefing, adding that such accusations were damaging for the Russia-Spain relations.

Russia is surprised by the claims made by Defense Secretary Jim Mattis that the United States is in Syria with the permission of the United Nations, Washington does not have such mandate, Russian Foreign Ministry spokeswoman Maria Zakharova said Thursday.

Earlier this week, Mattis said that the presence of the United States in Syria had been approved by the United Nations as Washington was engaged in the fight against Daesh terrorist group (outlawed in Russia) terrorist group.

“We were surprised to hear US Defense Secretary Jim Mattis’ statements … that the US armed forces are in Syria with the UN approval. We would like to understand and in order for this question to not remain rhetoric … what specific mandate is this? When was it issued and by whom?” Zakharova said.

However, Russia hopes that the United States will adhere strictly to the agreements reached by the countries’ presidents on fighting terrorism.

Speaking at a briefing, Zakharova said that media outlets were reporting frequently on the United States supporting terrorists, which “cannot be called a fair game.”

“We hope that the US side will adhere strictly to the agreements on fighting terrorism which were recorded in the Russian and US presidents’ joint statement on the sidelines of the APEC [Asia-Pacific Economic Cooperation] conference in Da Nang on November 11,” she told a briefing.

On Situation in Afghanistan

Russian Foreign Ministry spokeswoman Maria Zakharova drew attention to media reports saying that US and NATO forces deployed in Afghanistan support the Islamic State terrorist group (IS, banned in Russia) in the country, adding that Russia calls for an investigation.

Zakharova noted that the Russian Fergana Iformation Agency reported, citing local officials of Afghan norther provinces and lawmakers of the country’s parliament, that Daesh terrorists are strengthening their positions in border regions with Central Asia.

"The respective confession [of Afghan authorities and lawmakers] clearly points to, unfortunately, support and aid of the Daesh Afghan wing provided by the US and NATO troops, including by transporting the militants on so-called unidentified helicopters, supplying them with weapons, and so on," Zakharova told reporters.

These facts "once again highlight the issue of the true goals of foreign military presence in Afghanistan," the spokeswoman stressed.

"He is meeting with foreign representatives, including the Russian ambassador to Riyadh," she told a briefing.

According to last week's media reports, Hariri met not only with Russia's Sergei Kozlov, but also with Italian Ambassador Luca Ferrari.

The Lebanese prime minister said in his speech televised on November 4 that Iran and Hezbollah movement, prominent in Lebanon, were actively sowing discord in the Middle East and mentioned his fear of an assassination plot against him.

Lebanese President Michel Aoun has demanded that Saudi Arabia explain why the prime minister has not returned to Lebanon to hand in his resignation in person. Hezbollah leader Hassan Nasrallah has said that the reasons for Hariri's resignation were linked to Riyadh and he could be held in Saudi Arabia against his will, while the Iranian Foreign Ministry has called the prime minister's accusations groundless.