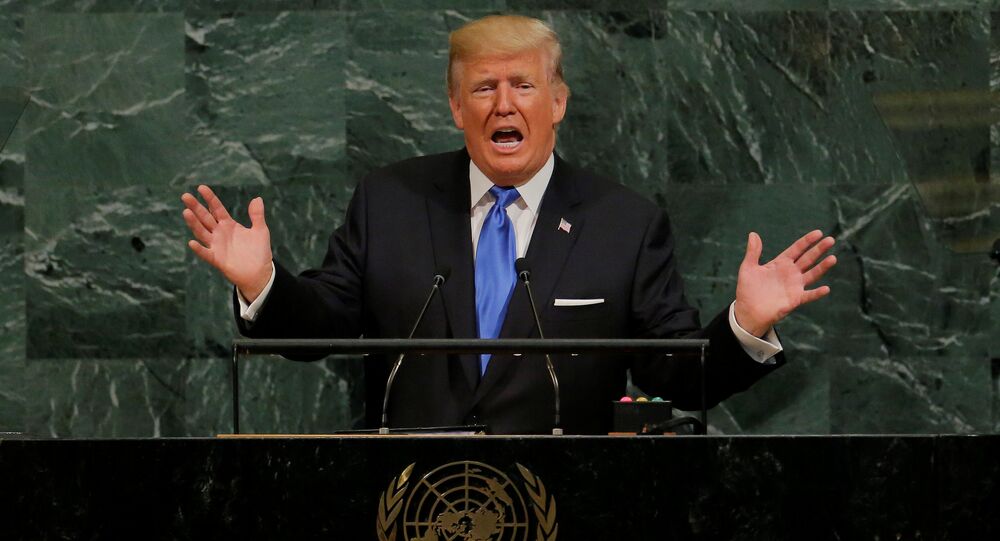 In an interview to Sputnik, the Venezuelan permanent representative to the United Nations described Donald Trump's speech at the UN General Assembly as "very unfortunate."

"The speech of Mr. Trump was very unfortunate. He visited the house of international love just to speak for the total destruction of North Korea, just to ask for review or cancel of the nuclear agreement with Iran and to announce more interference in Venezuela," Ramirez said.

The ambassador also noted that the Venezuelan government was particularly concerned with threats of "military option."

"As you know, they announced many possibilities, including the military option. For us it’s too bad, it’s sad, it’s not true, we reject this kind of declaration in very stringent forms," he said.

In his first address to the United Nations General Assembly, Trump on Tuesday threatened to "totally destroy" North Korea if necessary while also issuing sharp warnings to Venezuela and Iran.

© REUTERS / Kevin Lamarque
'Embarrassing' Iran Deal and 'Total Destruction' of N Korea: Highlights of Trump's First Ever UN Speech
The official added that the newly-imposed US sanctions on North Korea were illegal.

"All unilateral sanctions are illegal," Ramirez stated when asked to comment on the new US sanctions against Pyongyang.

He noted that the Non-Aligned Movement (NAM), presided by Venezuela, had also regarded the unilateral sanctions illegal.

"In fact, we conducted a ministerial meeting for the Non-Aligned Movement and we issued a statement rejecting the international sanctions because they are illegal. It is very important that the opinion of the majority of the countries are against the unilateral sanctions," he added.

On closing of the US embassy in Cuba

© REUTERS / Enrique De La Osa
US Closing Embassy in Cuba May Set Back Relations Decades Based on Dubious Claims
Closing the US embassy in the island nation of Cuba would mean a return to a policy that was wrong for at least 50 years, Venezuela's Permanent Representative to the United Nations Rafael Ramirez told Sputnik on the sidelines of the UN General Assembly.

On Sunday, US Secretary of State Rex Tillerson told CBS that the US government was considering closing its embassy in Cuba because last year US and Canadian diplomats in Havana allegedly sustained brain injuries as a result of a "sonic attack."

"This is too bad, this means a return to the policies that were wrong for at least 50 years to try to isolate Cuba," Ramirez stated.

On September 14, the US senators sent a letter to Tillerson, urging the State Department to close the embassy in Havana and expel all Cuban diplomats from the United States, since Cuban authorities failed to ensure the security of US diplomats.

On the Syrian issue

A new UN contact group on Syria initiated by France, as well as any other initiative to resolve the ongoing conflict, should include the position of Damascus, Venezuela's Permanent Representative to the United Nations Rafael Ramirez told Sputnik on the sidelines of the UN General Assembly.

"Any issue about Syria has to be decided by the Syrian people, and any initiative whatever it may be would have to take into account the position of the president Bashar Al Assad," Ramirez said when asked to comment on the initiative by Paris.

The ambassador expressed the hope that the Syrian government would succeed in regaining control over the country's territory.

"As you know we were involved in the Security Council for two years and I believe that, fortunately, the government of Syria is taking the control of the territory. And that is good because that will help him with the political dialogue," Ramirez said, noting the strong support of UN Special Envoy for Syria Staffan de Mistura in advancing the political dialogue.

The violence in Venezuela has stopped after the National Constituent Assembly election held on July 30, Venezuelan ambassador to the United Nations Rafael Ramirez told Sputnik.

"The situation in Venezuela is much better after the National Constituent Assembly, the violence has ended. We don’t have any political violence in the streets which is very important," Ramirez said on the sidelines of the UN General Assembly.

© REUTERS / Miraflores Palace
Venezuelan Government Agrees to Start Talks With Opposition
Earlier in September, Venezuelan President Nicolas Maduro said that his government had agreed to start a dialogue with the country's opposition at the talks initiated by former Spanish Prime Minister Jose Zapatero and President of the Dominican Republic Danilo Medina. He added that Jorge Rodriguez, former vice president of Venezuela, would represent him at the meeting with the opposition.

He also highlighted the importance of the government's engagement in political dialogue with the opposition.

"We are going to initiate a national dialogue, some countries of the region are helping — Bolivia, Nicaragua, Mexico, and Chile. That means we are finally entering into a political process, political dialogue. Our government has always insisted on political dialogue now the good news is that, we believe, the opposition is also going to be involved and engaged," Ramirez said.

The Ambassador also noted that the opposition will take part in the upcoming October elections for state governors. The voting was initially scheduled for December but then moved to an earlier date, October 15.

"We are going to hold the regional election and all the political factors, including the opposition are participating in them, which is very important because it means that they are finally following the rules of democracy and our constitution," he added.

Venezuela experienced several months of unrest, which intensified in the run-up to the Constituent Assembly elections. The government wanted to launch the assembly to stabilize the situation in the country, but the opposition has been strongly against it.