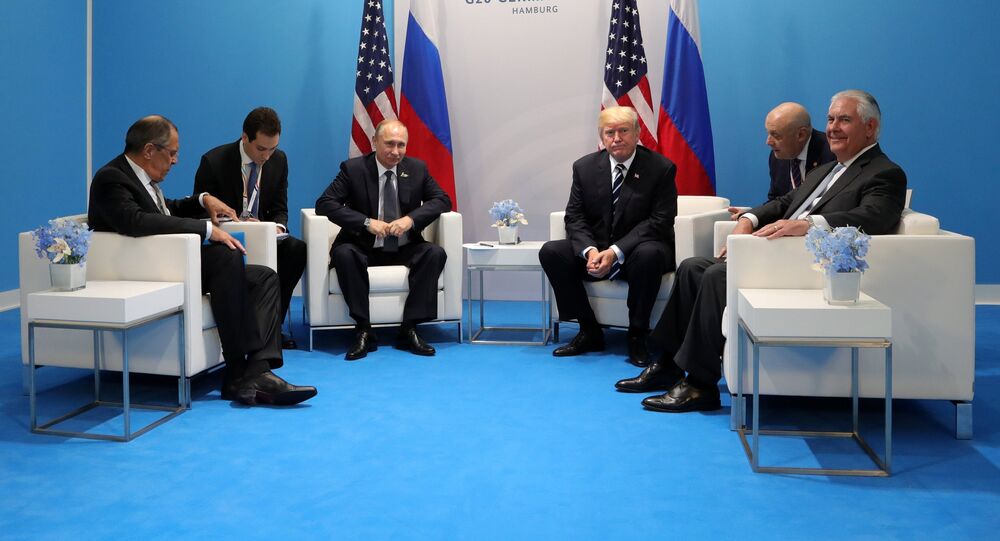 Vladimir Putin and Donald Trump succeeded in reaching a consensus on four specific points from among a wider range of issues that they discussed, Russian Foreign Minister Sergey Lavrov said at a briefing after the Russian and US Presidents wrapped up their talks.

© Sputnik / Sergey Guneev
Why G20 Talks Between Putin and Trump Are of 'Paramount Importance'
On Friday, Russian Foreign Minister Sergey Lavrov along with his US counterpart Rex Tillerson briefed journalists on the results of the hotly anticipated, first-ever meeting between Russian President Vladimir Putin and US President Donald Trump.

Both are attending the G20 summit, which has gathered the leaders of the world's top 20 economies in Hamburg.

Tillerson said that the meeting revealed "a very clear, positive chemistry" and connection between the two leaders, while Lavrov characterized the first bilateral talk as constructive.

First and foremost, Putin and Trump agreed on Syria, where a cease-fire in the country's the south-west is due to be announced at noon on July 9.

This area is one of the four de-escalation zones which were discussed at the recent round of inter-Syrian talks in the Kazakh capital Astana.

According to Lavrov, Russia and the United States have committed themselves to ensuring the implementation of the ceasefire, while security around the de-escalation zone will initially be provided by the Russian military police in coordination with the United States and Jordan.

© AFP 2020 / SAUL LOEB
US President Donald Trump (L) and Russia's President Vladimir Putin shaking hands during a meeting on the sidelines of the G20 Summit in Hamburg, Germany, on July 7, 2017

"Experts from Russia, the United States and Jordan completed work today in the capital of Jordan, Amman. They agreed to a memorandum on the establishment of a de-escalation zone in southwestern Syria: in Daraa, Quneitra and As-Suwayda provinces, which will have a ceasefire in force from midday, Damascus time, on July 9," Lavrov told reporters after the Trump-Putin meeting.

Secondly, the two presidents agreed to establish a bilateral channel of communication between the representatives of Russia and the United States to promote the peaceful settlement of the conflict in Ukraine, something that will importantly be implemented the basis of the Minsk peace agreements.

"We expect a representative of the United States on the Ukrainian settlement to arrive in Moscow for consultations in the near future," Lavrov said.

© Sputnik / Ramil Sitdikov
Matvienko: Putin-Trump Meeting May be Step to Overcome Crisis in Russia-US Relations
Earlier Reuters quoted a statement by the State Department, as saying that former US ambassador to NATO Kurt Volker was appointed US special representative to Ukraine. According to the statement, he will coordinate the efforts of the State Department to resolve the conflict in this country.

The third agreement clinched during the Putin-Trump meeting pertains to a wide array of cybersecurity-related issues.

During the talks, Trump raised his concerns regarding Moscow's alleged interference in last year's presidential elections in the United States, and Putin once again denied any involvement by Russia.

US Secretary of State Rex Tillerson said that Putin's denial was seen as a hindrance to moving the relationship between the United States and Russia forward, and the two presidents agreed to establish a new framework to deal with the challenges of cyber threats.

"It was agreed that all these issues … will be the subject of Russian-American interaction," Lavrov confirmed.

According to him, Trump described as "strange" an unsuccessful campaign in the US to investigate "Russian interference" in the US presidential elections, stressing that he accepted all the statements by Vladimir Putin that there was no interference.

Last but not least, Putin and Trump agreed to facilitate the passage of procedures "necessary for the appointment of new US ambassadors in Russia and Russian ambassadors in the United States," according to Lavrov.

Additionally, the two leaders discussed the denuclearization of the Korean Peninsula and the anti-Russian sanctions.

Trump speaks about Putin as he meets with him at the G8 in Germany: "We've had some very, very good talks." I BET. https://t.co/zQuDdolYcq pic.twitter.com/UGk4wKQnvs

In this vein, Tillerson said that Russia conducts economic activities with North Korea but that Moscow's official policy on the issue is the same Washington's: it advocates the denuclearization of the Korean Peninsula.

"I believe that there are differences in terms of tactics and pace, so we will continue to work with them," Tillerson said, referring to Russia.

© AP Photo / Evan Vucci
New US Sanctions Bill to Be ‘In Trouble’ After Trump-Putin Meeting - Think Tank
On the anti-Russian sanctions, Tillerson said that Trump "took note of actions that have been discussed by Congress most recently, additional sanctions that have been voted out of the Senate." However, the two presidents at this moment preferred to "focus on how we move forward from here," he added.

The Putin-Trump meeting, which was initially intended to take 30 minutes, lasted for over two hours, compelling Putin to apologize to the next leader he had an appointment with, Japanese Prime Minister Shinzo Abe. After speaking with the US President, he rushed to the Elbphilharmonie to attend a gala concert.

Future Trump-Putin Meetings Not Yet Agreed On - Tillerson