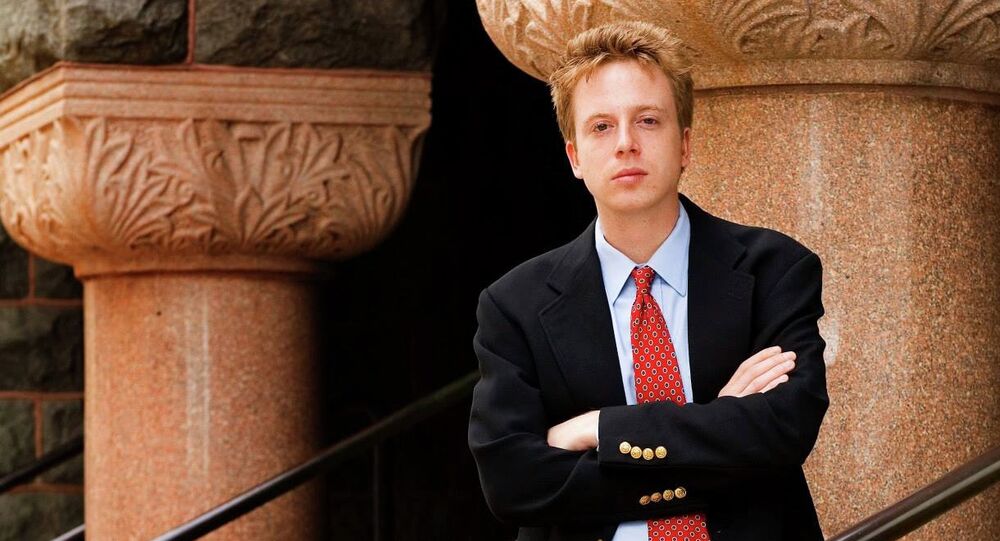 Three days after award-winning US journalist Barrett Brown was thrown back “in the hole,” the federal government has yet to provide an infraction sheet detailing his offense.

The US Marshals Service took Brown into custody last week after a routine visit with his case managers. The Bureau of Prisons "technically holds sway over my life until May 25th when my sentence officially ends," Brown told Sputnik in a statement on Sunday morning.

"After 72 hours, I still have received nothing," he said. "Contrary to BOP policy, and indeed federal law, I was not provided a written infraction report, much less given the disciplinary hearing that normally precedes punishment."

Of course, detainment without explaining the reasons behind Brown’s re-arrest begs the question of whether the BOP is using exclusive authority to silence a political opponent. Brown has been a critic of the BOP and the US federal government in recent years, and has reported on Washington’s efforts to conduct shady surveillance operations on US citizens via third-party private contractors.

Attorney Jay Leiderman told Sputnik on Friday the Barrett Brown Rule is unfolding before our very eyes: that is, the government can use nifty legal tactics to silence and arrest individuals they personally don’t like.

But this is precisely why the US Bill of Rights was included in the US Constitution: To prevent the government from infringing upon the most basic, inalienable rights. In addition to the current attempts to silence Brown — he was detained one day before he was slated to do an interview with PBS — the BOP’s current tactics violate due process protections enumerated in the 5th and 14th Constitutional amendments.

A 1855 US Supreme Court ruling on Murray v. Hoboken Land found "it was manifest" the due process of law, “was not left to the legislative power to enact any process which might be devised. The due process article is a restraint on the legislative as well as on the executive and judicial powers of the government." This is what’s referred to in legalese as "substantive due process," which Brown has clearly been denied based on the BOP’s failure to provide the infraction sheet.

Prior to publication of this article, the BOP did not respond to Sputnik’s requests for comment to verify or deny Brown’s allegation.

"Luckily, in the days leading up to my arrest, I managed to make audio recording of BOP regional chieftain Luz Lujan and two halfway house staffers threatening me with a ‘refusal’ or ‘refusing an order’ charge if I did any further media interviews without seeking Lujan’s prior approval," Brown explained.

"As I explained to Lujan and the halfway house staffers in those recordings, there is nothing in the BOP media program statements that requires even actual inmates to seek permission to communicate with press, much less those like myself, who have already been released to home confinement," he said. In a review of the BOP media program statement, Sputnik found no statutes requiring individuals released to home confinement to seek approval from the BOP prior to conducting interviews.

"If this were happening in another country, [the US government] would deplore it," former CIA covert operative Barry Eisley tweeted last week.

Attempts to snuff out Brown’s speech won’t be met without significant legal resistance. “This is a terrible affront to the First Amendment,” Jay Leiderman, one of Brown’s legal advisors, told Sputnik News in an exclusive interview on Thursday.

In the wake of his abrupt detainment, Brown said he will “briefly revive the Barrett Brown Review of Arts and Letters and Jail for D Magazine” in addition to contributing a weekly column at The Intercept, "IF ONLY I CAN THINK OF SOMETHING TO WRITE ABOUT."

Brown first won acclaim for reporting on Stratfor’s intelligence operations directed against US civilians. The Justice Department told Bank of America that Stratfor would be ideally suited to conduct these operations. As the tales of corporate espionage emerged, Brown reported on the leaks, which made waves due to the operations coinciding with the Occupy Wall Street movement.

The government tried to paint Brown as the hacker, though he’d only reported on them. He initially faced a 100-year sentence. After pleading guilty to two charges pertaining to obstruction of justice and threatening an FBI agent, Brown’s sentence was knocked down to five years and three months. In sum, Brown’s work helped spark the war on leaks that persists to this day.