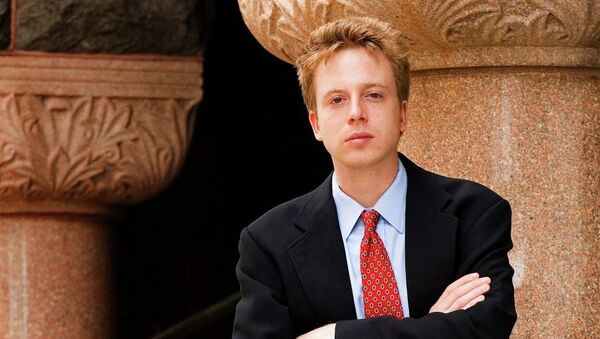 Grant Ferowich
All materials
US intelligence reporter Barrett Brown was arrested, again, on Thursday morning for criticizing the US government while appearing on radio interviews.

“I would call the people who did this a bunch of chicken-sh*t a**holes that are brutalizing the Constitution,” Brown’s lawyer, Jay Leiderman, said following his client’s detainment.

Brown first won acclaim for reporting on Stratfor’s intelligence operations directed against US civilians. The Justice Department told Bank of America that Stratfor would be ideally suited to conduct these operations. As the tales of corporate espionage emerged, Brown reported on the leaks, which made waves due to the operations coinciding with the Occupy Wall Street movement.

The government tried to paint Brown as the person who leaked these documents, though he’d only reported on them. He initially faced a 100-year sentence. After pleading guilty to two charges pertaining to obstruction of justice and threatening an FBI agent, Brown’s sentence was knocked down to five years and three months. In sum, Brown’s helped spark the war on leaks that persists to this day.

Brown was put in handcuffs during a routine check-in, before being taken to an unknown facility. Since being released early from jail, Brown has not missed a single meeting with prison authorities.

Following his arrest, Brown told his mom he believes authorities brought him into custody over failure to gain “permission” to provide interviews with news outlets after he was released in November. Brown’s first exclusive interview was given to Radio Sputnik’s By Any Means Necessary with the ever-affable Eugene Puryear.

​Brown also spoke to Vice News last week and was slated to go on PBS Friday for another interview, and these appearances may be what landed him back in jail. So much for free speech.

“If this were happening in another country, [the US government] would deplore it,” former CIA clandestine operative Barry Eisley tweeted.

According to his mother, Brown said that the Bureau of Prisons never informed him that he would need to get special permission to do TV or radio interviews. Brown’s point of contact with the BOP, Luz Lujan, refused to give Brown “copies of program statement rules saying this is a requirement during halfway house and/or home confinement status.” When Lujan finally got back to Brown after a week of not returning his calls, Brown received a form for reporters visiting an inmate in prison, the Intercept reported. The BOP also never showed Brown the document stating why he had to get permission.

In other words, according to Brown, he was never provided a copy of the form he is now being arrested for not having filled out.

“You guys are going to carry out this, you guys are going to characterize this as a refusal of an order that they’re not giving me in writing,” Barrett said in a recorded conversation with his case manager. If failing to cooperate with BOP restrictions on interviews is the reason Brown was stripped of his freedoms during a routine meeting, that would be “disgusting,” his lawyer said, noting that the so-called restrictions seem to have been created on an improvised basis.

UPDATE: "This is a terrible affront to the First Amendment," Leiderman told Sputnik News in an exclusive interview. Ironically, Brown was never required to get permissions to do interviews while he was previously in federal custody, Leiderman added.

Within the past two days, Brown was asked to produce "prior authorizations" to conduct interviews. "It came out of the blue," Leiderman continued. Brown never actually said no to getting the prior authorizations, but simply requested that the BOP furnish the policy manual which Lujan said was the reason Brown was being asked to get the permissions. The counselor is "not aware" of any existing precedent where the BOP deployed this policy manual, which adds fire to the claim that this policy measure is being used against Brown personally.

Brown's words "are weapons of mass education, which is why they are targeting him."