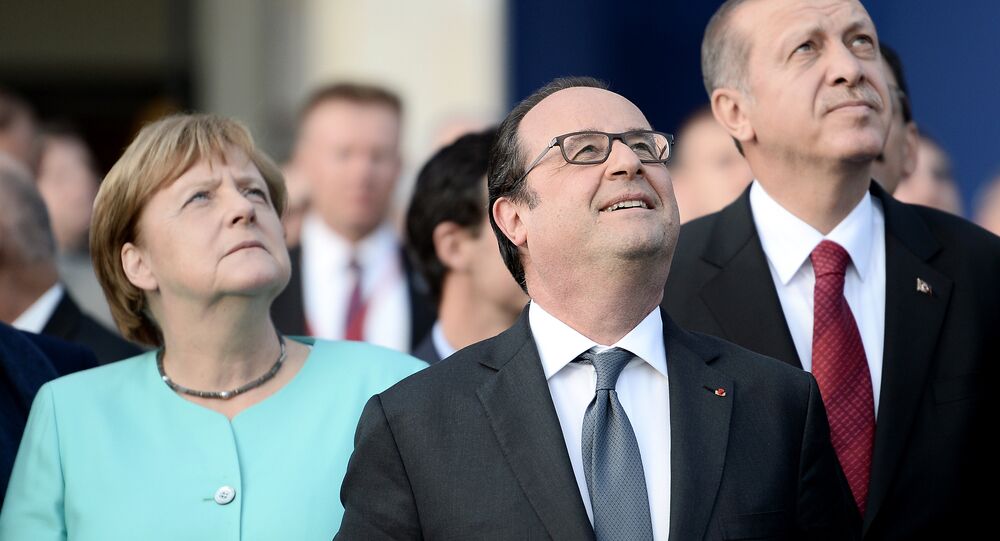 The current political standoff between Turkey and the Netherlands may set a precedent for other EU countries, which will want to link their internal political tension to their relations with Ankara, Turkish political analyst Oktay Aksoy told Sputnik Turkey.

© REUTERS / Thilo Schmuelgen
Germany's Turkish Community to Suffer Most Harm From Berlin-Ankara Fracas
In an interview with Sputnik Turkey, Oktay Aksoy, Turkish political analyst and former Turkish Ambassador to Finland, Jordan and Sweden, warned that the deterioration in Turkish-Dutch ties may inspire other EU members to correlate internal political tension with their relationship with Ankara.

Earlier this week, Dutch Prime Minister Mark Rutte hailed the victory of his ruling People's Party for Freedom and Democracy (VVD) in the national elections.

An exit poll conducted by NOS public broadcaster showed that Rutte's party secured at least 31 out of the 150 parliament seats available.

Frauke Petry recently told Sputnik Germany that Amsterdam's recent move to play hard ball with Turkish ministers had played an important role in securing the victory of Mark Rutte's party. The AfD leader said that the Prime Minister won support at the expense of right-wing candidate Geert Wilders due to the last-minute spat with Turkey.

On the same day, Turkish Family and Social Affairs Minister Fatma Betul Sayan Kaya decided to travel to the Netherlands, but was denied entry to the Turkish consulate in Rotterdam.

Earlier this month, the Netherlands along with Austria and Germany moved to ban Turkish politicians from campaigning across the European Union, as the country approaches its controversial reform referendum, and Erdogan lambasted their efforts, accusing the trio of evoking Nazi activities.

© Photo : Pixabay
'Be Braver and Save Europe': Germany's AfD Party Rallies Voters After Dutch Eurosceptic Defeat
"Your actions are no different from what the Nazis used to do… we no longer want to see the Nazi world. We don't want to see the practices of those fascist regimes," he said.

Meanwhile, Oktay Aksoy told Sputnik that Turkey was very much concerned about the latest developments in the Netherlands given that "on the one hand, the Netherlands remains Turkey's NATO ally and on the other – Amsterdam has repeatedly supported Turkey within the framework of its relations with the European Union."

"The latest events in the Netherlands are alarming because they create a precedent for other EU member states which, like the Netherlands, may want to link their internal political tensions to their relations with Turkey," Aksoy said.

He warned of the far-reaching consequences of Ankara building relations with EU countries "on the basis of the agenda proposed by the far-right forces," which he said damages "both the European Union and our partners in the EU."

"On the other hand, Turkey is now preparing for a referendum on the adoption of constitutional amendments and such incidents divert the Turkish public's attention. Instead of discussing the upcoming constitutional changes, we are arguing about our [Turkey's] ties with Europe, in a move that backslides on democracy," Aksoy said.

He also warned against attempts to isolate Turkey "in every possible way," expressing hope that "the EU countries will stop pursuing domestic policies which have a negative impact on bilateral and multilateral relations with Turkey."

Meanwhile, Zeynep Sefariye Eksi, chairman of the Turkish organization Demokratik Isci Dernekleri Federasyonu (DIDF, or the Federation of Democratic Workers' Associations), told Sputnik that the tensions between Berlin and Ankara "will lead to damaging consequences, mostly for the migrants of Turkish origins living in Germany."

© REUTERS / Yasin Bulbul
'No Different From the Nazis': Erdogan Lashes Out at European Travel Bans
Relations between Berlin and Ankara became strained after Turkish-German journalist Deniz Yucel was arrested in Istanbul in February over alleged links to a terrorist organization and terrorist propaganda.

Around 3 million migrants of Turkish origin currently live in Germany; around half of them are Turkish citizens and are thus eligible to vote in the April 16 referendum on constitutional change in Turkey. According to DIDF's leader, much of the Turkish diaspora in Germany opposes Erdogan's nationalism.

"In an attempt to create a base for the propaganda that Western countries are anti-Turkey, Erdogan is trying to escalate arguments between Turkey and the EU and Germany in a calculated, provocative way," Eksi said.