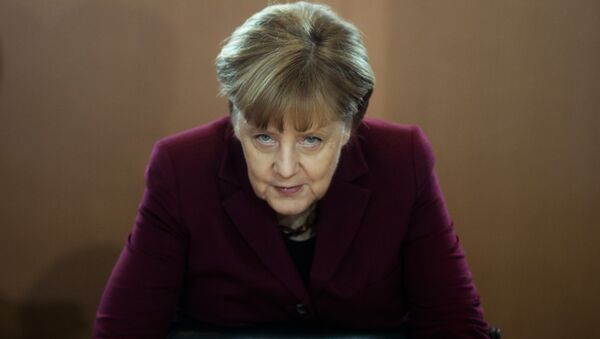 © AP Photo / Markus Schreiber
Subscribe
International
India
Africa
Cassandra Fairbanks
All materials
A Turkish newspaper is making headlines for depicting German Chancellor Angela Merkel in a Nazi uniform on their front page and referring to her as “Frau Hitler.”

In the image, Merkel sports a Hitler-style moustache while holding a gun. To make sure no one misses the point, she’s shown standing in front of a Nazi flag.

‘We Have Something in Common’: Trump Jokes With Merkel About Obama Wiretapping
The newspaper, The Daily Gunes, also referred to the chancellor as an “ugly aunt,” and accused her of attempting to become the “leader of fascists.”

Turkey has been battling with Germany and the Netherlands since Dutch leaders prevented Turkish ministers from holding rallies within their borders to promote support for a referendum in Turkey that would vastly expand the powers of President Recep Tayyip Erdogan. There are currently 1.5 million eligible voters from Turkey living in Germany.

Erdogan has accused Germany of using “Nazi practices” by not allowing him or his proxies to campaign in the nation, and claimed that the chancellor is “supporting terrorists.” Merkel and French President Francois Hollande have both called Erdogan’s comments “unacceptable.” Merkel, in remarks to Parliament, also stated that his “sad and incredibly stupid” statements trivialize the suffering caused by the Nazis.

“Germany, which has open arms for terrorist organizations … is trying to instigate the whole of Europe against Turkey,” the Daily Gunes article stated.

Merkel has explained that Germany is not trying to distance itself from Turkey, but to fight for fundamental principles such as freedom of speech, press, and assembly – which would be endangered by the referendum.

“We want to do everything in order to prevent conflicts emanating from the domestic situation in Turkey from being carried into our coexistence here,” Merkel said in her remarks to Parliament. “Let us continue, wherever possible, to promote and further improve our way of living together. This is a matter close to our hearts.”

The president of the German Parliament, Norbert Lammert, has stated that the referendum could lead to “an increasingly autocratic state that is growing more removed from European values and standards.”

When asked for comment on the newspaper’s image, German deputy government spokesman Georg Streiter told the Daily Mail that Germany is “not taking part in a game of provocation.”