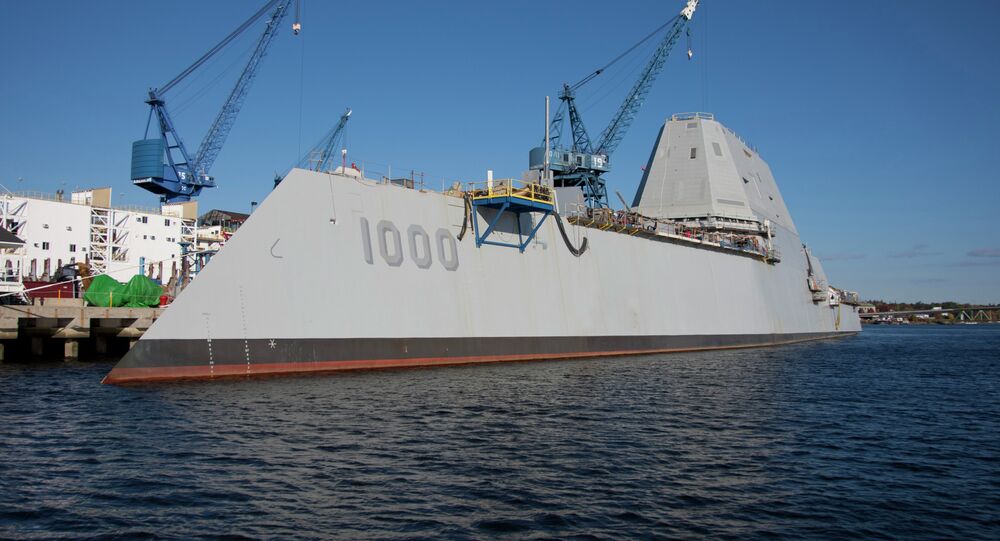 Commenting on the proposal, experts noted that on the one hand such deployment would be aimed at pressuring China, on the other hand – at testing Beijing’s reaction.

© CC BY-SA 2.0 / Marion Doss / 080723-N-0000X-001
US Navy Unleashes Most Expensive Destroyer Ever – Meet the $4.4 Billion Zumwalt
The $4.4 billion USS Zumwalt is the most technologically advanced destroyer with the American Navy. The 183-meter-long warship has a displacement of 15,000 tons. It has an almost nonexistent radar signature due to its innovative angular design. The warship is armed with various missiles and torpedoes, including the Tomahawk, Evolved Sea Sparrow Missile, and Vertical Launch Anti-Submarine Rockets, and can be equipped with a railgun.

Deployment of such an advanced strategic warship would be complicated. However, if the South Korean Defense Ministry were to allow the ship to be parked in the region it would essentially be breaking its promise that no US troops or military equipment would be deployed to Jeju.

"THAAD [US Terminal High Altitude Area Defense system] is incomparable to the Zumwalt. It is a brand-new strategic weapon. I’m not sure that even its temporary stop [at the Jeju base] is realistic. As for strategic deployment, it is a very complicated matter," Kim Dongyeop, professor of the Institute for Far Eastern Studies at Kyungnam University, told Sputnik Korea.

© AP Photo / U.S. Navy/Petty Officer 2nd Class Will Gaskill
No Need for Drama: US Avoids Inflaming South China Sea Dispute
The professor noted that the Jeju naval base is fit for deploying such vessels like the USS Zumwalt.

"The base is designed for deployment of Aegis-equipped warships with a Vertical Launch System capable of launching up to 20 Tomahawk missiles," the expert said.

At the same time, according to Kim, the ship has not yet undergone railgun and other weapons tests and "its deployment as a strategic weapon would be complicated."

"But if it were deployed Washington would have to revise its strategic objects management plans. Even if this happens the deployment would take a long period of time and lead to a number of difficulties," he added.

© Flickr / Mark Holloway
S. Korean Defense Minister Says US Counterpart Confirmed Plans to Deploy THAAD
It is very unlikely that the USPACOM commander was kidding when he proposed deployment of such an advanced strategic weapon to South Korea. However, it is noteworthy that the idea was disclosed by a US military commander, not by the South Korean government.

"Washington wants to signal that the deployment of the Zumwalt could deter China’s military presence. They say: 'If China doesn’t let us do one thing [THAAD deployment] we’ll find another option [Zumwalt].' By doing this, the US wants to prompt China to take responsive steps," Kim pointed out.

"The USS Zumwalt is capable of being equipped with powerful railguns. They outperform any other types of modern weapons. If such a warship was deployed near the Korean peninsula this would be a headache for China," the expert said.

© AP Photo / Lockheed Martin
China Hopes to Find Settlement With South Korea Over THAAD Deployment
The strategy of Chinese naval ships is to travel from Shanghai to the Pacific, bypassing Jeju and Okinawa. The expert suggested that the Zumwalt’s deployment to the region could completely cut off the Chinese navy from entering the Pacific.

"In addition to THAAD, such an anti-China US naval base would create another serious concern for China’s security," Kim said.

The expert also assumed that the initiative may have been a proposal for China to reach a compromise on the deployment of THAAD to South Korea.

The deployment was agreed by Seoul in 2016 and is expected to be completed by the end of 2017. With the stated aim of countering threats from North Korea, the issue serves as one of the main stumbling blocks in Beijing-Seoul ties.

"While there is no direct link between the Zumwalt and THAAD, the warship may be used to mount pressure over THAAD," Kim concluded.