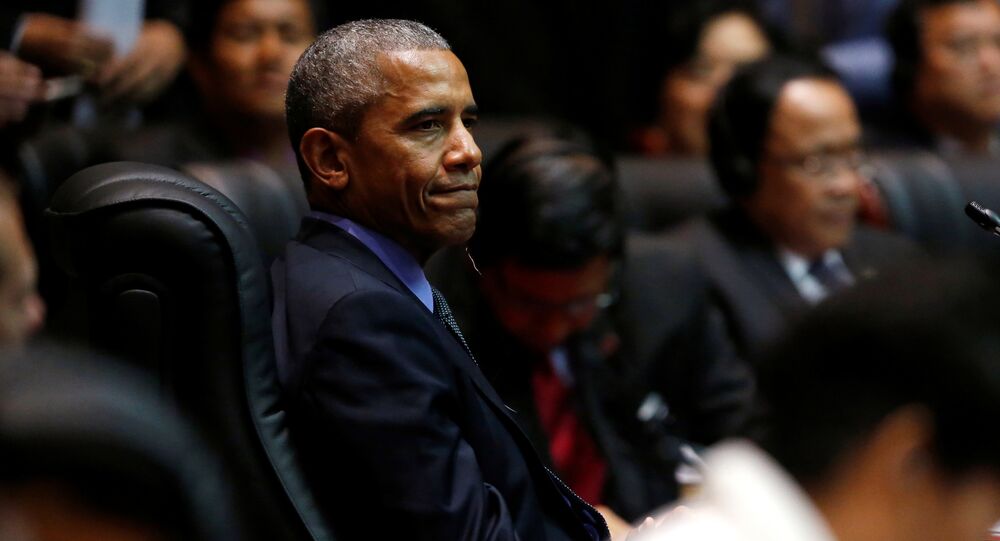 © AFP 2021 / JIM WATSON
Obama Crashes G20 by Warning Beijing of ‘Consequences’ in the South China Sea
Barack Obama's recent visit to Asia began with a humiliating snub from his Chinese guests. When he arrived at the G20 summit in Beijing last week he was forced to disembark from the back exit of Air Force One, apparently due to a logistical issue.

The episode is a particular slight to Obama, because in the early days of his presidency, he announced his intention to offer America's hand of friendship to its adversaries.

"We will extend a hand if you are willing to unclench your fist," Obama said in his inauguaral speech.

Writing in German newspaper Die Welt, author Clemens Wergin points out that in 2009, the US President was so keen to build relations with Beijing that decided not to meet with the Dalai Lama, because he didn't want to upset China.

However, a trip to China that year convinced Obama of the need for a "pivot to Asia," in order to show Beijing that the US still considers itself the controlling power in Asia, and that US allies there can count on US support.

"The future of the world is decided in Asia, they thought in the White House. However, some geopolitical shocks occurred which led the world's superpower to more active engagement."

© REUTERS / Kevin Lamarque
Obama Confirms His Dedication to Make TPP Pass Before 2017, but Why?
"Like many of Obama's foreign policy concepts, the 'pivot to Asia' was full of high hopes, and like many other approaches in foreign policy, the result has been very modest. In any case, the US pivot to Asia did not make a good impression in Beijing."

Obama's failure to curb China's ambitions in the South China Sea was a "slap in the face" for the President, and the probable failure to get TPP approved this year also leaves the US lacking soft power in Asia, Wergin wrote.

After his arrival at the G20 summit, Obama further inflamed relations on Monday by warning China about the "consequences," if it doesn't back down from its position regarding the South China Sea.

"For years, their policy has relied on pinpricks and a steady erosion of American power. The Chinese bases in the South China Sea were not just a slap in the face for Obama, they were also intended to show US allies in the region that Washington can't do much to protect their interests," Wergin wrote.

Obama's pivot to Asia envisages building economic bridges with Asian countries, and he has prioritized the Trans-Pacific Partnership (TPP) trade agreement. At the ASEAN summit in Laos this week, he reiterated his determination to push for the passage of the controversial trade deal.

"I have said before and I will say again: Failure to move ahead with TPP would not just have economic consequences, but would call into question America's leadership in this vital region," Obama said.

However, on Thursday US House of Representatives speaker Paul Ryan said that the TPP would not be passed by Congress this year, because "we don't have enough votes."

The failure has lead Obama to seek "concession prizes" for his foreign policy legacy in Asia, such as improved relations with Laos. However, this would represent modest progress, given the small size of the country's economy and its firm position within China's sphere of influence.

Reaching Out to Laos, Obama Seeks 'Concession Prize' in Twilight of Presidency