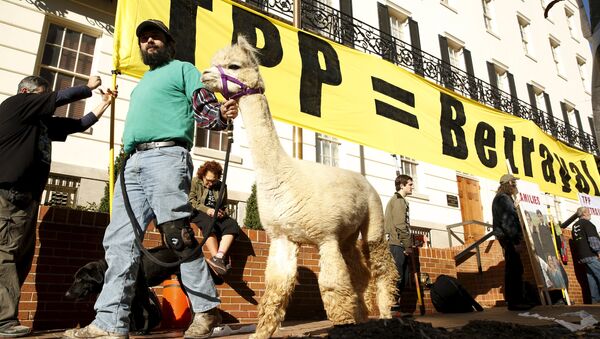 Speaking during an interview before his departure to G20 summit in China, US President Barack Obama personally confirmed earlier statements that he’s inclined to pass the controversial TPP trade deal before he leaves office.

Earlier last week Josh Earnest, spokesperson for the Obama administration, announced that the administration is inclined to bring the controversial TPP trade deal in effect before next president — regardless who that would be — takes office.

"The president is going to make a strong case that we have made progress and there is a path for us to get this done before the president leaves office," Earnest said.

This time, President Obama defended the deal in person.

"It removes 18,000 taxes, effectively, tariffs, because we're a relatively open market and many of our trading partners there have been closed, it gives us a — a huge lever to open up markets for American goods and services. And so there's no serious economist who hasn't looked at this and said this is actually not only a smart trade deal, but it actually makes up for some of the failures of previous deals to have fully enforceable labor or environmental components," said the president, who is apparently unaware of economist and Nobel laureate Joseph Stiglitz, who last week called the deal "outrageous" and "absolutely wrong".

There are several points in Barack Obama's interview that are particularly interesting in connection to the upcoming elections.

"It plays right into GOP presidential nominee Donald Trump's hands," speculates Breitbart.com, "since he has framed this election in many ways as a referendum on the TPP: a vote for Clinton is a vote to revive and salvage the deal in some way, while a vote for Trump is a vote to incinerate it once and for all."

However, While Donald Trump has openly opposed the idea of TPP since the beginning, Hillary Clinton has also recently adopted anti-TPP rhetoric, but there are indications that this was a compelled step.

In fact, Hillary Clinton reportedly endorsed TPP more than 40 times, even calling it the "gold standard" of trade deals. With such a record, Hillary's more recent changes in attitude might not be exactly sincere.

But what wins Clinton points now, will backfire later. Hillary Clinton has become opposed to the deal, some believe out of political expediency, but she will have to do something about TPP in the event she is elected — maybe, even drop it entirely which is unlikely, given her above mentioned record of support.

With that in mind, one could argue that Barack Obama's intention to push TPP during his lame duck session is playing into Hillary's hands, as having the deal passed before the election effectively takes this difficult responsibility out of her hair.

This is going to be a risky step for Barack Obama, as his intention to push the TPP may untie Hillary's hands for the price of her political image, as Hillary Clinton's presidency is perceived by some as Barack Obama's "third term", with being blamed for previous president's actions coming as a part of the package.

Will it be Obama's action or inaction that damage Clinton the most is a highly complicated question. In either case, Donald Trump, with some political finesse, will be able to win from Democrats' somewhat clumsy politics.