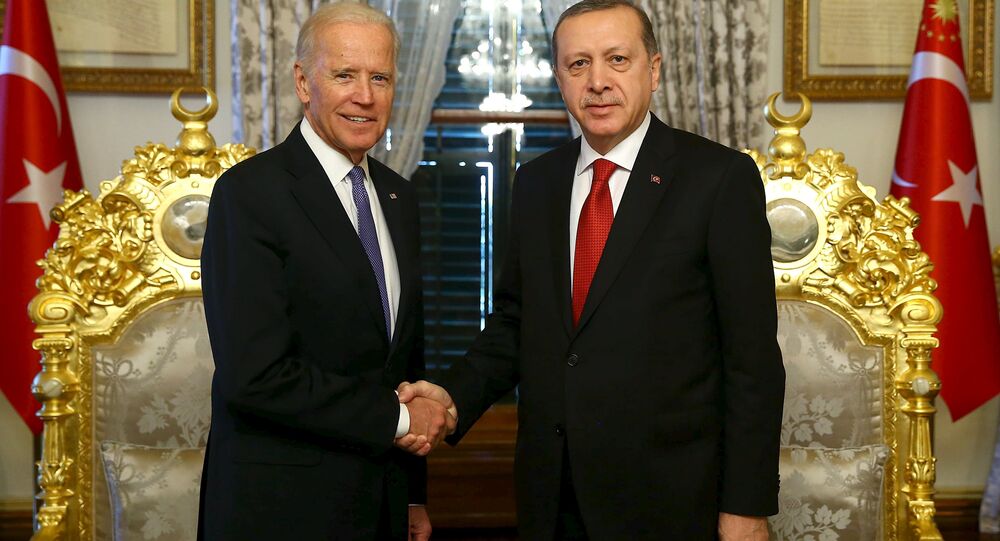 Professor and journalist Dr. Bilal Sambur told Radio Sputnik's Brian Becker that although the mid-July events led to certain tensions, the US and Turkey will not give up on each other.

According to Sambur, the strategic interests of the two countries coincide on many fronts, and Biden's visit to Ankara is crucial in determining what direction the US-Turkey relationship will take.

"Obviously, Biden will express his strong support for…democratic government…and the Turkish president. And Turkish people will be happy to hear this statement," Sambur said, during Radio Sputnik's Loud & Clear broadcast. He added, however, that the expressions of sentiment may not be enough to smooth over the current level of mistrust.

Despite a long-lasting strategic partnership a strong anti-American feeling has recently prevailed among some Turks, Sambur noted. Turkish state-run media has published many op-ed pieces asking why the US does not support Turkey in Syria, or the Erdogan administration's struggle against the movement of US-based Islamic scholar Fethullah Gülen, which Ankara now considers a terrorist organization.

​"Formally, Turkey and US are allies to each other, but informally there are…feelings of hostility, suspicion and mistrust among the Turkish population, among some Turkish officials and media about US," he claimed.

According to Sambur, from the perspective of the Turkish government, the failure of US President Barack Obama in the Middle East was a result of his rejection of military cooperation with Turkey. Turkish authorities believe that accepting Ankara's policy in Iraq and Syria is the last chance for the US to be successful in the region.

© AP Photo / Emrah Gurel
Erdogan is 'Implicitly Fueling' Anti-Americanism in Post-Coup Turkey
The perception of the US as an ally was diminished further in the wake of the failed coup and America's hesitance to show overt support for Erdogan's increasingly autocratic rule, Sambur asserted.

He added that Turkey's recent incursion into northern Syria, under the banner of assisting the Free Syrian Army to oust Daesh, significantly coincided with Biden's meeting with Erdogan, and could be considered a statement of intent to the US that, "if you are not helping us, whatever it costs, we are going to implement our policy in…Syria."