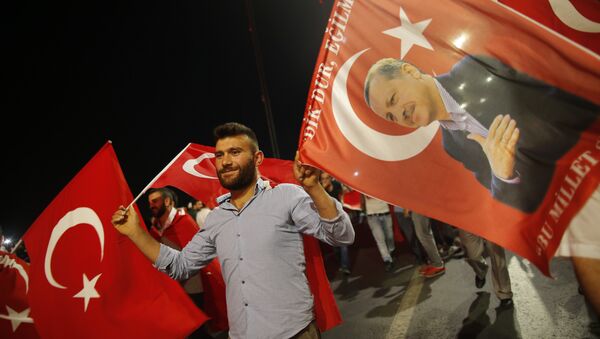 © AP Photo / Emrah Gurel
Subscribe
President Recep Tayyip Erdogan has been "implicitly fueling, if not yet formally endorsing" the already potent anti-American wave in Turkey as a means to pursue his domestic and foreign policy objectives, Burak Kadercan, an Assistant Professor of Strategy and Policy at the United States Naval War College, wrote for the National Interest.

Well-pronounced anti-American sentiments have been a distinctive feature of the Turkish society for decades. As many as 90 percent of the Turks held an unfavorable view of the US, according to a study released in 2012. A report, published by the Pew Research Center in July 2014, showed that more than 63 percent of Turkish people had an unfavorable view of the US in the past decade.

Interestingly, anti-Americanism, according to Kadercan, is "shared by all ethnic, religious and political groups, and cannot be explained by differences in education or income levels."

However, the analyst maintained that these sentiments are "harmless" and do not affect Ankara's foreign policy. In other words, Turkey will not break up with the West simply because public opinion seems to favor such a move.

Present-day anti-Americanism in Turkey "will not lead to a breakup between Turkey and the United States all by itself – that is, unless President Erdogan consciously decides to sever ties with the US. If he ever makes such a decision, then anti-Americanism will be his way of convincing Turks that it is time to turn away from the West, not a force compelling his behavior," he explained. 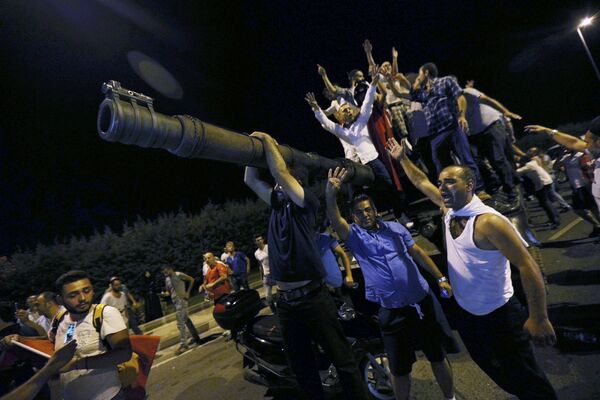 Kadercan is also convinced that President Erdogan "can certainly control" the latest wave of anti-Americanism that was sparked by the failed military coup and Washington's reserved response to it.

You Shall Not Pass: Turkey 'Wants to Control 100Km Corridor' on Syrian Border
Ankara wanted the US and its other partners to sympathize with the Turkish people and their ordeal. Instead, the US has been critical of the post-coup purges and has yet not approved the extradition of Islamic cleric Fethullah Gülen, whom Erdogan and his supporters accuse of masterminding the putsch.

Recep Tayyip Erdogan has been "implicitly fueling" anti-American sentiments, because he "is weaponizing it to pursue his political objectives at home and overseas," the analyst observed. "In domestic politics, he is building on anti-Americanism to consolidate his political popularity in the aftermath of the failed coup."

The Turkish leader, according to Kadercan, will put an end to this strategy if he needs to.

"Make no mistake: Erdogan will not only stop fueling anti-Americanism, but also put a lid on it – when, of course, he thinks it no longer serves a purpose," he said.

000000
Popular comments
Turks are Muslims, and will turn with the wind to be with those they get the most money from or other benefits.

NATOisEVIL
25 August 2016, 15:43 GMT1
000000
What a reveling article. Where to start? Okay, we have Burak Kadercan, an Assistant Professor of Strategy and Policy at the United States Naval War College giving us his expert opinion on current Turkey/US relations. We are provided this data: "As many as 90 percent of the Turks held an unfavorable view of the US, according to a study released in 2012". ( 67 % per Pew Research in 2014.) With this evidence Mr. Kadercan concludes: " If he (Ergogan) ever makes such a decision (to sever ties with America), then anti-Americanism will be his way of convincing Turks that it is time to turn away from the West," What kind of logic is this 'expert' using? The data clearly shows that Turks need no 'convincing' when a great majority already hold negative views, and 'have for decades'. The expert ends with this bold statement: "Make no mistake: Erdogan will....... put a lid on it (anti-Americanism) – when, of course, he thinks it no longer serves a purpose". Mr. Erdogan, by himself, will have the great majority of Turkish citizens do an about-face and become 'pro-American in a 'blink of an eye'. Astounding.
Donny
25 August 2016, 16:01 GMT
000000
Newsfeed
0
New firstOld first
loader
LIVE
Заголовок открываемого материала
Access to the chat has been blocked for violating the rules . You will be able to participate again through:∞. If you do not agree with the blocking, please use the feedback form
The discussion is closed. You can participate in the discussion within 24 hours after the publication of the article.
To participate in the discussion
log in or register
loader
Chats
Заголовок открываемого материала
Worldwide
InternationalEnglishEnglishMundoEspañolSpanish
Europe
DeutschlandDeutschGermanFranceFrançaisFrenchΕλλάδαΕλληνικάGreekItaliaItalianoItalianČeská republikaČeštinaCzechPolskaPolskiPolishСрбиjаСрпскиSerbianLatvijaLatviešuLatvianLietuvaLietuviųLithuanianMoldovaMoldoveneascăMoldavianБеларусьБеларускiBelarusian
Transcaucasia
ԱրմենիաՀայերենArmenianАҧсныАҧсышәалаAbkhazХуссар ИрыстонИронауОssetianსაქართველოქართულიGeorgianAzərbaycanАzərbaycancaAzerbaijani
Middle East
Sputnik عربيArabicArabicTürkiyeTürkçeTurkishSputnik ایرانPersianPersianSputnik افغانستانDariDari
Central Asia
ҚазақстанҚазақ тіліKazakhКыргызстанКыргызчаKyrgyzOʻzbekistonЎзбекчаUzbekТоҷикистонТоҷикӣTajik
East & Southeast Asia
Việt NamTiếng ViệtVietnamese日本日本語Japanese中国中文Chinese
South America
BrasilPortuguêsPortuguese
NewsfeedBreaking
07:15 GMTCan Ole Gunnar Solskjaer Save His Manchester United Job?
07:06 GMTPrince Andrew's Lawyer Asks to Keep Epstein's Settlement With Virginia Giuffre Sealed
06:47 GMTDanish Health Minister Demands More Vaccinations to Avoid New Lockdown
06:42 GMTEx-Lehman Brothers Exec Predicts Three More Years of Inflation, Tech Stocks to 'Get Crushed'
06:39 GMTUS Senators Ask Biden to Waive CAATSA Sanctions Against India for Buying S-400 Missile Systems
06:28 GMTIsrael Plans to Allow Entry for Sputnik V-Vaccinated Tourists From 15 November, Source Says
06:18 GMTPoll: 6 in 10 Americans Say Oil, Gas Companies Bear Brunt of Blame for Climate Change
06:14 GMT'Worst Prepared': Denmark's Solo Mission Against Piracy Off the Coast of Africa Meets Criticism
06:06 GMTLondon Court Holds Hearing on US Appeal of Assange Extradition Case
05:51 GMTUK Budget and Spending Review: Sunak May Announce Britain Preparing for 'New Economy Post-COVID'
05:09 GMT'Pyramid Scheme': Project for Women-Only Island in Finnish Archipelago Fails to Materialise
04:00 GMTBoJo's National Insurance Tax Rise May Hinder Post-COVID Recovery, Cause Unrest in UK, Scholars Warn
03:42 GMTChina May Have the Edge in the Final Frontier With Its 'Satellite-Crushing' Weapon
01:50 GMTCongress to Get Tough on Armed Services After 2,000 Military Firearms Stolen During the 2010s
01:21 GMTOld Habits: Big Tobacco's Annual Cigarette Sales Increase for First Time in 20 Years, FTC Reports
01:00 GMTBlinken Speaks to Sudan's Prime Minister, Welcomes His Release - State Dept.
YesterdayChina Pushes Vaccination Program Ahead as Lanzhou Placed in Lockdown to Contain New Covid Cases
YesterdayAre Manchester United and Antonio Conte a Good Fit?
YesterdayAngry Emojis Only!
YesterdayThe Spice Must Flow: ‘Dune’ Sequel Greenlit After Successful Opening Weekend at US Box Office