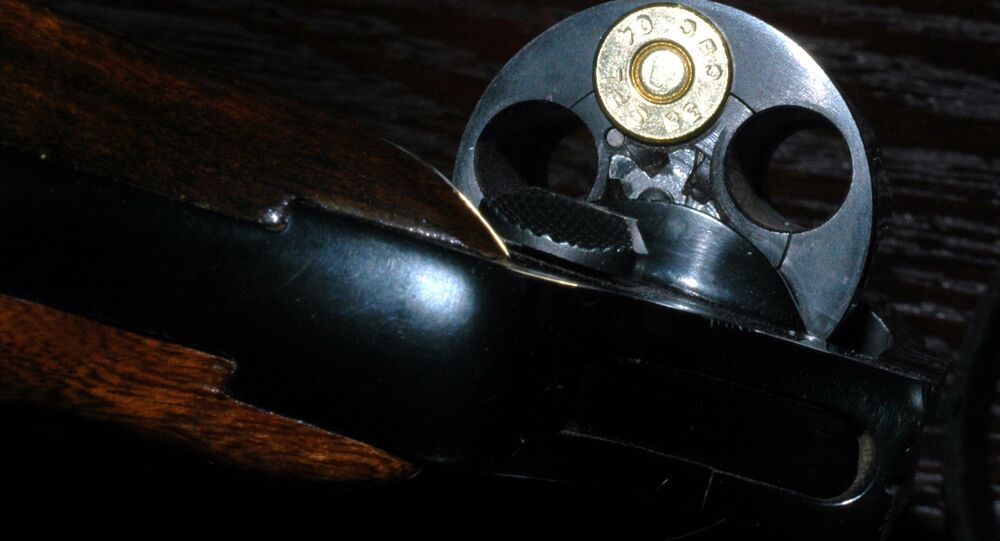 US policy towards Russia and its recent decision to quadruple military spending on NATO’s forces on Russia’s border resembles Russian roulette, a deadly game of chance, and risks turning the new Cold War into a hot one, according to Stephen F. Cohen, professor emeritus of Russian studies at New York University and Princeton University.

© Flickr / fliegender
Cold War Scare: US Propaganda Budget Reaches All-Time High
Professor Stephen F. Cohen has been recently very critical of the Obama administration’s policy towards Russia and the “reckless escalation of its confrontation” with Moscow.

“The Pentagon’s announcement that it will more than quadruple military spending on the US-NATO forces in countries on or near Russia’s borders pushes the new Cold War toward actual war-possibly even a nuclear one,” he wrote in his article for The Nation magazine.

The political analyst stressed that “with the exception of Nazi Germany’s invasion of the Soviet Union, Western military power has never been positioned so close to Russia.”

Such a policy, he noted, resembles Russian roulette, a lethal game of chance in which a player places a single round in a revolver, spins the cylinder, places the muzzle against their head, and pulls the trigger.

Such an experiment might easily make the present-day confrontation between the two countries even more dangerous than any preceding one.

© Photo : Wikipedia/Catechetical Guild
A World of Pure Imagination: NATO Rhetoric About Russian Threat is 'Absurd'
“Russia will certainly react, probably by moving more of its own heavy weapons, including advanced missiles, to its Western borders, possibly along with a number of tactical nuclear weapons. Indeed, a new and more dangerous US-Russian nuclear arms race has been under way for several years, which the Obama administration’s latest decision can only intensify,” Stephen F. Cohen suggested.

It will also have other dire consequences: it will “undermine ongoing negotiations between Secretary of State John Kerry and Russian Foreign Minister Sergei Lavrov on the Ukrainian and Syrian crises, and it will further divide Europe itself, which is far from united on Washington’s increasingly hawkish approach to Moscow.”

The political analyst was also very vocal in criticizing the mainstream media coverage of the standoff between the two countries and of a failure to address the issue by any of the presidential candidates in their presidential campaigns.

“Never before in modern times has such a dire international situation been so ignored in an American presidential campaign,” he noted.

The reason, he suggested, may be that “everything related to the new Cold War in US-Russian relations since the Ukrainian crisis erupted in November 2013 has been attributed solely to the “aggression” of Russian President Vladimir Putin or to “Putin’s Russia”- a highly questionable assertion, but long the media’s standard policy narrative.”

His view is echoed by Dana Rohrabacher, a California Republican, who chairs the House Foreign Affairs Subcommittee on Europe, Eurasia, and Emerging Threats.

In his article for The National Interest magazine she acknowledged that the US has put the so-called “Russian threat” above that which Daesh (also known as the ISIL/ISIS) poses.

He called such an assumption “belligerent nonsense.”

“Radical Islam has declared war on the United States, beheaded our citizens, planned and carried out the attacks on the World Trade Center and the Pentagon, killed our soldiers and Marines in Iraq and Afghanistan, and declared its intention to set up a caliphate that would stretch from the Mediterranean to the Caspian,” the politician explained in his article.

While “Russia’s activities in Ukraine and Syria, as Moscow sees it, represent a defensive effort to protect legitimate national interests,” he stated.

© AP Photo / Alik Keplicz
'Balance of Terror': Inside NATO’s Aggressive Expansion on Russia’s Borders
“In the Kremlin’s view, Crimea is Russian and has no bearing whatsoever on US security. Syria is as close to the Russian border as New York is to Chicago, and Russia will not countenance a jihadist regime in Damascus,” he said.

The politician also urged to consider the role the West played in the strategic fiasco of Ukraine, which is now “a shambles.”

Instead of the overthrow of the legitimately elected president of the country, the US should have encouraged “that country’s electoral calendar to play out.”

“Viktor Yanukovych likely would have lost the February 2015 election. There is little doubt Crimea would now be a part of the Ukrainian Republic,” he suggested.

“Obviously, some highly influential people can’t leave the Cold War behind, their mindsets and careers linked to a lingering enmity between the Kremlin and the White House. In particular, they can be found as think tank strategists and arms merchants,” he said.

The continuing trend of regarding Russia as an enemy rather than an ally, he said, is “a stunning and total failure of vision, moral and strategic.”

“We must cast aside such absurd, costly, unachievable and un-American ambitions that would have us policing and garrisoning the planet, intervening in every conflict. We must favor a policy that cultivates mutually beneficial relations with nations of like culture and values, negotiating smartly in the national interest—all, of course, while maintaining a defensive military posture second to none,” he said.

America was conceived as a strong and healthy Republic, not a vitality-draining empire, the politician finally stated.