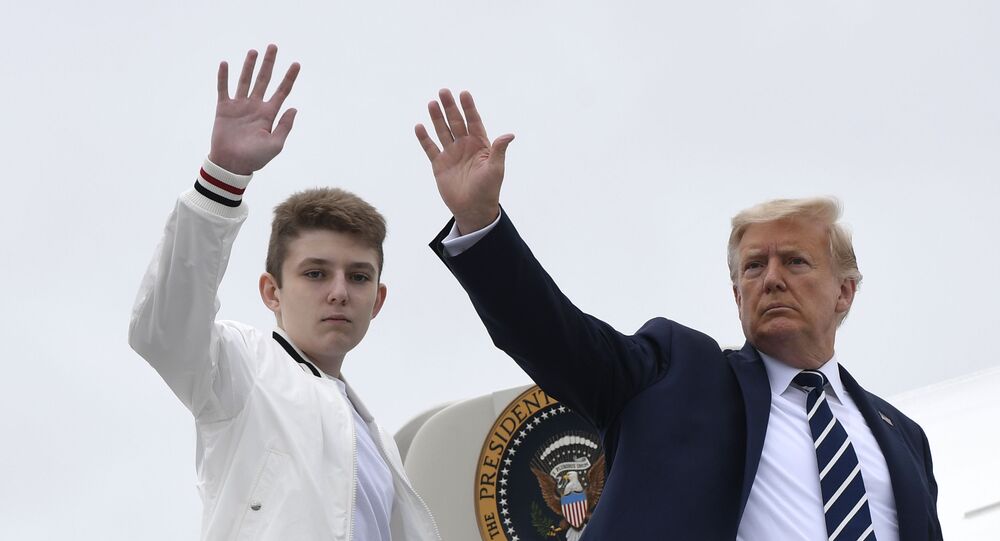 Barron Trump, 15, is the sole offspring of former US President Donald Trump and his third wife, former First Lady Melania Trump. Sources close to the former First Family recently revealed to People Magazine that Melania's parents maintain close proximity to her and Barron Trump because "Melania's core family is really her family."

While former US President Donald Trump mulls a possible re-entry to public office, Barron Trump, his youngest son, has reached a new height for the family -- literally.

The 15-year-old former First Son was spotted by photographers this week as he and his model mother exited Trump Tower in the Manhattan borough of New York City, New York.

The photo of Barron and his mother quickly went viral, with many netizens commenting on the rarely-photographed teen's apparent growth spurt.

The unprecedented growth of Barron Trump depicted with cats pic.twitter.com/0yole3qDZU

Every day we get closer and closer to the professional basketball player Barron Trump universe arc and I for one welcome it https://t.co/bB8HWMfdl5

NBA players staring at Barron Trump on the court since they both 6’7 pic.twitter.com/7Ig2ckxuJ9

somebody has to stop barron trump before he levels up again pic.twitter.com/8kScSHHPvo

Barron Trump may be 6’7” but Muggsy will GET the loose ball! pic.twitter.com/OQWSiorIdc

Barron Trump is 6'7 but his reactions are over 7 feet. pic.twitter.com/haNYKGNOEk

He loves basketball and with that height Barron could have a huge career in the NBA if he didn’t have to worry about his genetic disposition to bone spurs.

While Barron has rarely been seen out with his half-siblings, a source reassured PEOPLE Magazine last month that the 15-year-old has been consistently surrounded by Melania's family, including her grandparents and sister.

"Melania's core family is really her family," the source said, noting that the grandparents would actively change residences along with Barron and Melania. "They are a big part of her life"

The source contended that while the grandparents are not keen on the negative attention given to their family in recent years, "they make the best of the situation."

"They have no other choice, and they have chosen to stay here and support their daughter and grandson," the source added.