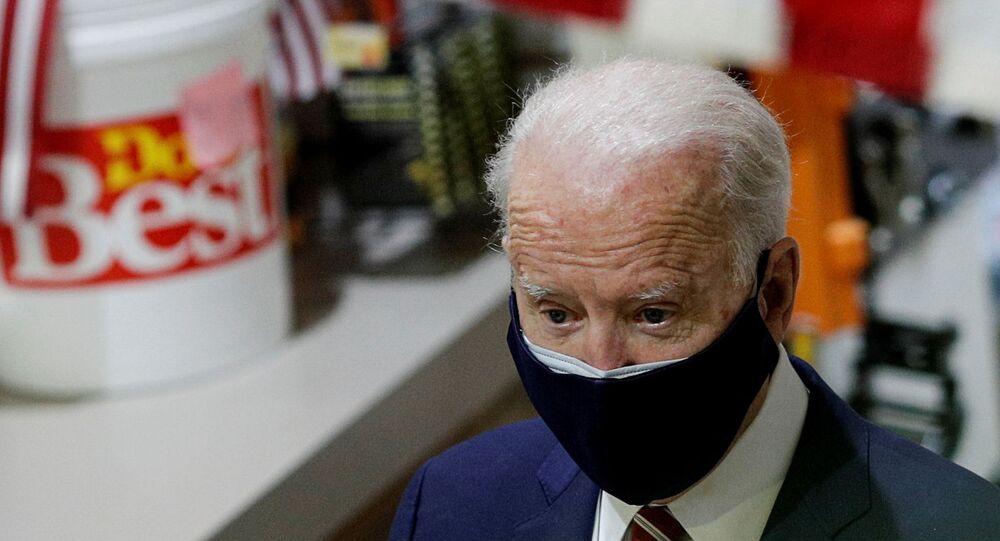 Joe Biden has not held a full-fledged press conference since he was sworn in as the 46th US president on 20 January, something that is clearly out of line with his predecessors, who took less than a month to attend a solo presser.

US President Joe Biden's aides prevented him from answering reporters' questions in an encounter that came on his 48th day in office without holding a solo press conference.

The incident occurred in Washington on Tuesday, when POTUS was wrapping up his visit to W.S. Jenks & Son, a hardware store that benefited from Biden's Paycheck Protection Programme (PPP).

Biden visit to a hardware store in DC today leaves his aides panicking and him confused. pic.twitter.com/2L7ItoIvqF

The president toured the store with its owners for about 10 minutes before the travelling press corps started to shout questions in Biden's direction, including those related to a migration crisis at the US-Mexican border.

The aides were quick to yell back, "Come on, press, you gotta go", as they moved the journalists away. Biden did not answer a single question, standing about 20 feet (approximately 6 metres) away from the reporters.

Does he even know what day it is???

Poor guy, he doesn’t know where he is lol

He's not ignoring them, he's zoning out. XD

It honestly looks like he has no idea where he is.

Why does he always seem so lost and confused

The man looks so lost

He has no clue where he is or who he is anymore.

"Listen to the absolute panic from his handlers", one Twitter user wrote on their account as another netizen claimed that Biden "has no clue where he is or who he is anymore".

© REUTERS / SAM WOLFE
'As Confused as Joe Biden?' Kamala Harris Claims 220 Million Americans Have Died From COVID-19
Biden was sworn in as the 46th US president in a highly guarded ceremony at the US Capitol on 20 January. He's fielded a spate of questions from journalists during his addresses, but still has not held a comprehensive press conference, unlike his predecessors, who took less than a month to do it.

Commenting on the possibility of Biden holding a news conference in the foreseeable future, White House press secretary Jen Psaki Psaki earlier this month said "not yet".

"But we will definitely have one. We will schedule it, and you'll be the first to know because you're pivotal participants in that​", she added