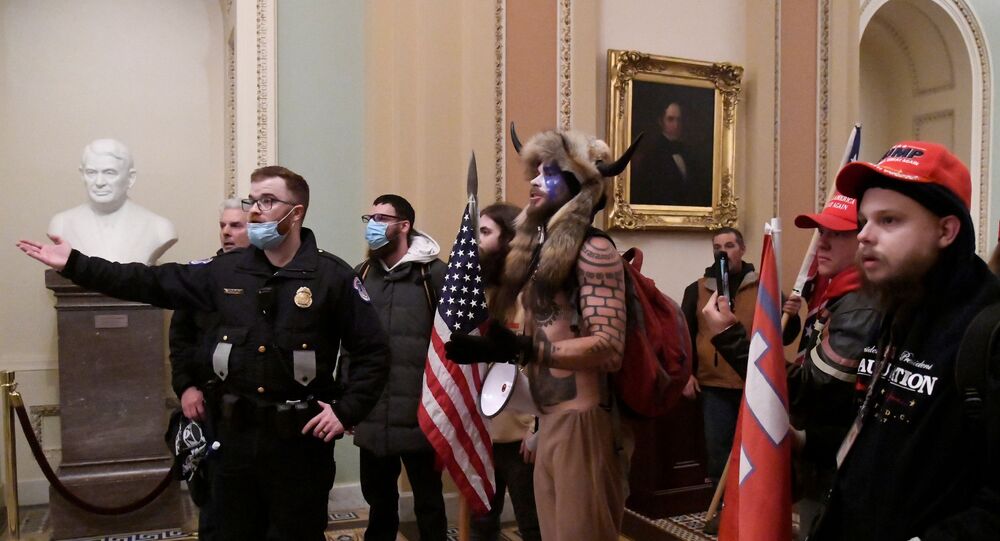 "QAnon Shaman" Jake Angeli, who with his horned buffalo head-dress and Stars-and-Stripes face paint has become iconic of the Capitol riot, is seen greeting fellow protesters before mounting the Senate chamber podium and sitting in the speaker's chair.

A video of the January 6 US Capitol riot shows a wounded protester guarding against others "disrespecting" the Senate chamber as police politely ask them to leave.

The video is now going viral on social media, with some users holding it up as a counter to the official narrative of an "attempted coup" — which has seen criminal charges laid against some 100 participants and the House of Representatives vote to impeach President Donald Trump just days before he is set to leave office.

Self-styled “QAnon Shaman” Jacob Chansley — AKA Jake Angeli, dubbed "JamiroQAnon" on social media — is seen entering the quiet Senate chamber accompanied by a police officer and greeting a handful of other protesters.

​One man is seen bleeding after being hit in the face with “some kind of plastic bullet”, but turns down the Capitol policeman’s offer to call for medical assistance.

When the officer asks "any chance I could get you guys to leave the Senate wing?", the injured man assures him they will and that "I been makin' sure they ain't disrespectin' the place".

But as he speaks, Chansley mounts the podium and appears to sit in the speaker's chair. Another video shows the buffalo-hatted Chansley bellowing from the gallery as protesters leaf through senators' abandoned papers.

​The footage from the Senate is in stark contrast to videos of the moment protester Ashli Babbitt, a 14-year US Air Force veteran, was fatally shot in the neck by a masked, plain-clothes officer as she tried to climb through a broken window in a bid to enter the House of Representatives chamber in the opposite wing of the building. Moments after the shooting, SWAT-style officers with assault rifles charged up the stairs behind the protesters.

Longer recordings of the incident show uniformed police guarding the barricaded door to the House stepped aside moments before Babbitt was shot.

Chansley was formally charged last week with violent entry and disorderly conduct for his part in the protest at the Capitol.

The DC federal attorney's office claimed in a statement that his flag pole was "a spear, approximately 6 feet in length, with an American flag tied just below the blade".

© AP Photo / J. Scott Applewhite
Fire at Homeless Camp Puts US Capitol on Brief Lockdown, Interrupting Inauguration Rehearsal
Senators and House representatives were evacuated as protesters breached the security cordon on one side of the Capitol building without encountering serious resistance from police. The protest delayed Democratic candidate Joe Biden's confirmation as president-elect, but also prompted several Republicans to abandon their bids to challenge the results from several key swing states and demand a recount.

Washington DC has been placed under strict lockdown ahead of Biden's inauguration on Wednesday, with 15,000 National Guard troops deployed around the city and security barriers around the Capitol building.