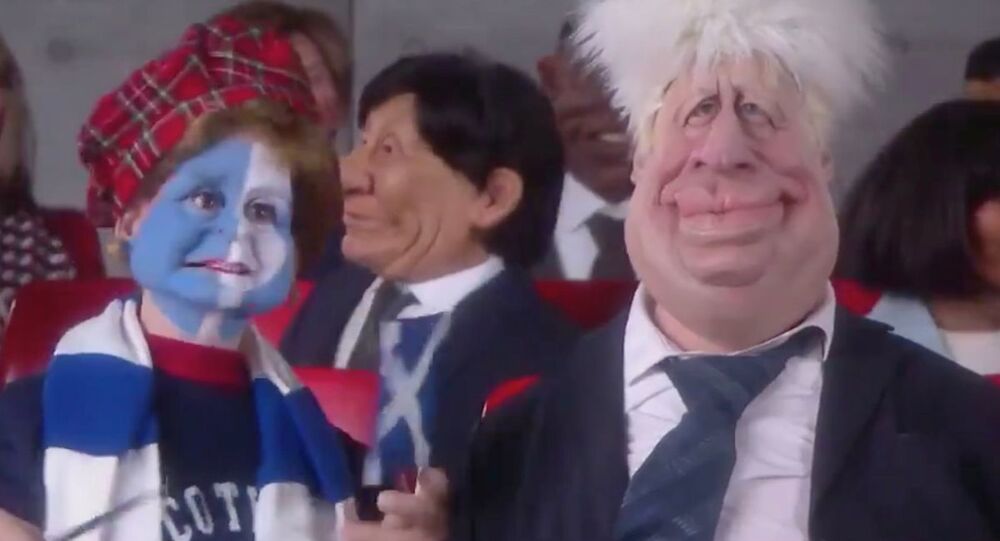 Last month, the celebrated British satirical show "Spitting Image", known for its mimicking of politicians and celebrities using distorted puppets, returned to screens after more than a 20-year break.

Netizens have remained at odds over the appearance of a puppet of Scotland's First Minister Nicola Sturgeon in the British satirical show "Spitting Image", which typically takes aim at prominent political and public figures.

In a clip of the sketch, Sturgeon's puppet is seen uttering "fandabbydozy", a catchphrase of the Scottish comedy duo "The Krankies", and then shouting "Glasgow kiss" as the puppet headbutts a latex effigy of UK Prime Minister Boris Johnson.

Most Twitter users immediately lashed out at what one of them described as Sturgeon's "Irish accent", with some slamming the sketch as "embarrassing" and referring to the puppet as "pretty awful".

Let me guess those who say it's embarrassing are no doubt cult members. I actually think it's a good likeness, however the accents a bit dodgy, she sounds more Ned like than the puppet. 🤣🤣 They should make a Haggis song, to replace the old chicken one. 🤣🤣

Ghastly, dreadful, nauseating and the puppet is pretty awful too.

Hahahaha I thought that was a clip of her BBC daily lecture!

why does she have an Irish accent though?

The only outrage should be about the FM's 'Scottish' accent.

Others, however, were not that critical, tweeting that they "loved" Sturgeon's puppet.

"There's been a mild uproar about Nicola Sturgeon's puppet on Spitting Image but honestly why? It was funny and Nicola headbutted Johnson on the nose; what more could we want?", one user noted.

thats hillarious - i’ll need to watch it now just for that! The likness is uncanny 🤣

The @ScotGovFM @NicolaSturgeon loves it .... here she is catching it for the first time on TV!
(It’s just a gif after all ....)
😂😂😂 pic.twitter.com/JlLprMlwHs

There's been a mild uproar about @NicolaSturgeon puppet on @SpittingImage but honestly why? It was funny and Nicola headbutted Johnson on the nose 🤣 what more could we want? #indywales #Annibyniaeth #indyref2 #Wales #Scotland

Personally I love it!

The real Sturgeon is embarrassing too.

Not as embarrassing as Sturgeon herself.

The uproar comes almost two months after the world-famous show made a comeback after a more than 20-year hiatus, this time wowing the audience with puppets of US President Donald Trump, UK Prince Harry, and his wife Meghan Markle, as well as Mark Zuckerberg, and Kim Kardashian, among others.