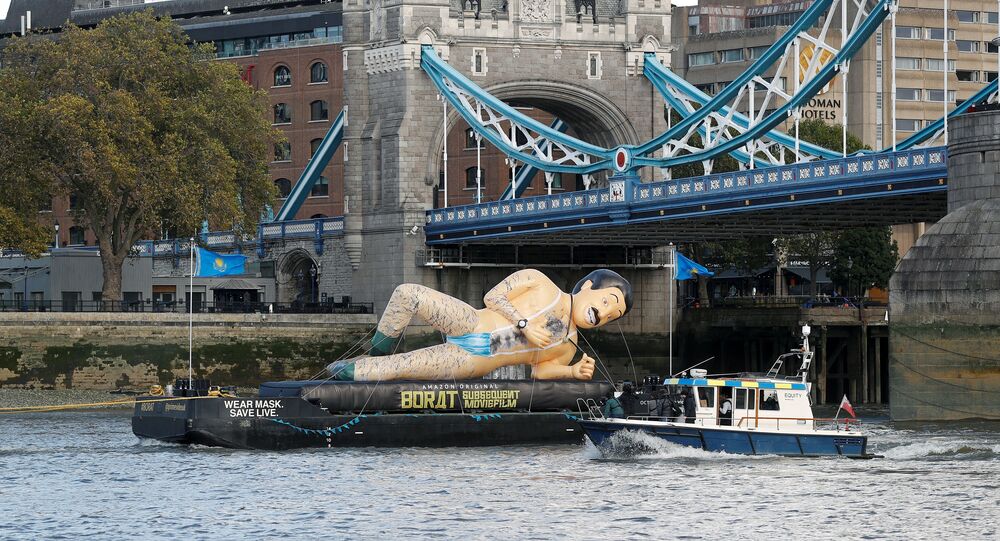 Video: Blow-Up Borat Sails Back Onto the Screen in Toronto and London

Sacha Baron Cohen's new Borat movie sequel has already made headlines after several of his filmed pranks went viral. Due for release on Amazon's subscription service, the latest installment focuses on ridiculing US President Donald Trump, his cabinet and his supporters.

With the character's trademark 'mankini' replaced by a surgical mask, the plastic Kazakh was towed across Lake Ontario on Thursday as a promotional stunt for actor Sacha Baron Cohen's new cinematic outing: Borat Subsequent Moviefilm.

In London the grotesque apparition drew fans for a cheeky selfie.

The  film will be released on Amazon ​on Friday, October 23, but several of the pranks Cohen's pulls in character as Borat during its production have already made the headlines.

At a conservative 'Three Percenter' rally in Olympia, Washington, in June, he reportedly barged onto the stage and sang a song with lyrics that painted the COVID-19 pandemic as a liberal conspiracy.

After Bakalova interviewed Giuliani - in a fawning set-piece designed to look like a right-wing appreciation of the former New York City mayor - Cohen rushes in as Giuliani lays back on the hotel room bed, shouting: “She’s 15. She’s too old for you.”

At one point Giuliani is seen fiddling with his shirt and apparently putting his hand down his trousers.

“I was tucking in my shirt after taking off the recording equipment,” he declared. “At no time before, during, or after the interview was I ever inappropriate. If Sacha Baron Cohen implies otherwise he is a stone-cold liar.”