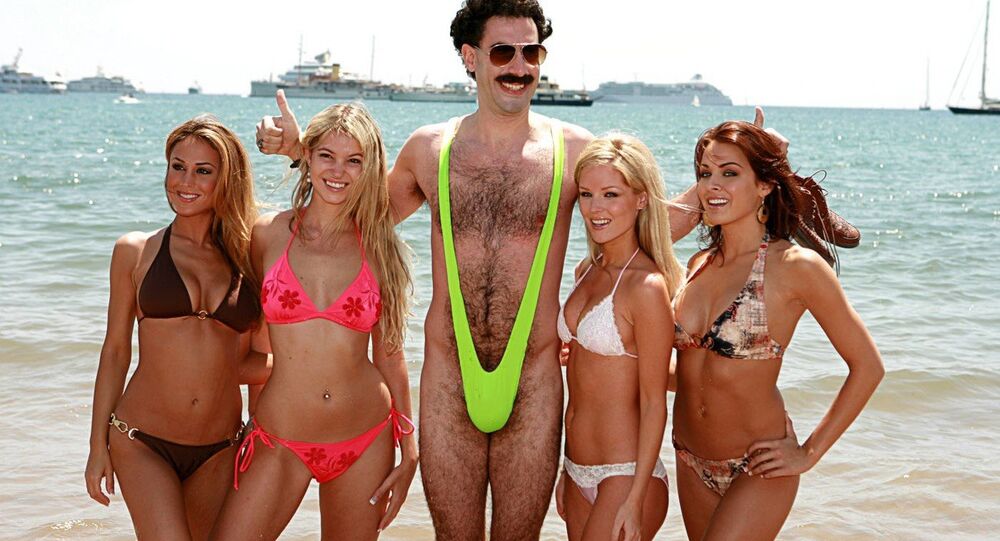 The satirical video also serves as a promo for Sacha Baron Cohen's new movie Borat: Gift of Pornographic Monkey to Vice Premiere Mikhael Pence to Make Benefit Recently Diminished Nation of Kazakhstan - with its bizarre reference to Vice-President Mike Pence in the title.

Comedian Sacha Baron Cohen Has taken an in-character dig at US President Donald Trump in a viral promo video for the Borat sequel.

​The video, with a voiceover by Baron Cohen as Borat, calls Trump "strongest premiere in history" and insists "he not racist - black guys love him so much they kneel before him" over an image of NFL players kneeling in a pre-game Black Lives Matter protest.

It also makes a jibe at Trump for his previous association with Jeffrey Epstein and avoiding the draft during the Vietnam War due to bone spurs on his heels.

"He protector of women. He hero of war" the voiceover says, over footage of Trump at a party with Epstein and young women subtitled: "Listen stranger, touch any of them and I will crush you".

"Biden's breath so bad, he forced wear mask" Baron Cohen says over a shot of the former vice-president in a surgical-style face covering. "because of Trump, 350 million Americans still alive".

Baron Cohen, in costume as Borat, was spotted in several places in the US this summer filming pranks for the movie. At a conservative Three Percenter rally in Olympia, Washington, in June he reportedly barged onto the stage and sang a song with lyrics painting the COVID-19 pandemic as a liberal conspiracy.

​“He came on stage disguised as the lead singer of the last band, singing a bunch of racist, hateful, disgusting s***,” ​Yelm City Councilman James Blair said. “His security blocked event organizers from getting him off the stage, or pulling power from the generator.

"After the crowd realized what he was saying, and turned on him, his security then rushed the stage and evacuated them to a waiting private ambulance that was contracted to be their escape transport.”

The incident is reminiscent of the character's appearance at a rodeo in the 2006 original film Borat! Cultural Learnings of America for Make Benefit Glorious Nation of Kazakhstan.