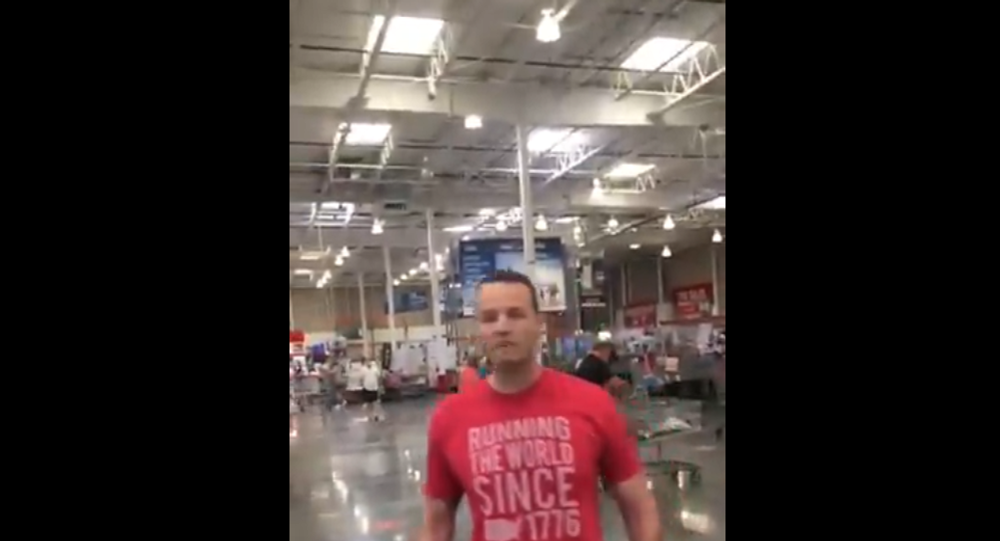 A US man was recently given the pink slip from his employer after cellphone footage surfaced on social media showing him lash out at a Costco shopper who asked him to wear a mask inside the Florida-based store.

Identified as Daniel Maples, the Florida resident is seen in video footage yelling at the shopper that he feels “threatened” and that the filmer needs to “Back the f**k up and put your f**king phone down.”

​Maples, wearing a shirt that says “Running the world since 1776,” is also pictured glaring at the person taking the video in the Fort Myers Costco.

The footage was first posted online in a tweet by Billy Corben on July 6. In his caption, Corben said that the incident took place on June 27 and quoted one of the customers targeted by the man as saying: “To give Costco the credit, they escorted him out and made me wait inside and monitored him until he left and then they send someone with me to the care to make sure I'm okay."

Ted Todd Insurance (TTI) on Tuesday confirmed that Maples, who worked for the company at the time the video was taken, has been fired.

“Thank you to everyone for their comments and messages raising awareness about a former employee at Ted Todd Insurance. Their behavior in the video is in direct conflict with our company values and their employment has been terminated,” the company wrote in a tweet.

“Threatening behavior and intimidation go against our core mission to be trusted advisors in our community. We are also committed to immediately reviewing our internal existing culture at TTI,” the company added.

Costco implemented a mask-wearing policy at all of its 547 US stores and 250 international locations on May 4.

According to Costco Chief Financial Officer Richard Galanti, most customers have followed the policy without causing any issues.

“Overall, the mask requirement has been well received,” Galanti recently told Fort Myers outlet the News-Press. “There have been some who have chosen not to shop here. But overall, the majority of the people have been supportive of it. We believe it’s to help slow the spread of the virus. If we’re right, we’re right. If we’re not right, it’s a relatively small inconvenience. We’re not trying to challenge anybody’s constitutional rights."

“All of these things were not done to help our business. We were trying to be responsible. We know there are differing viewpoints, but certainly our employees appreciate it. We have over 2 million people come into Costco every day. If someone comes in without a mask, we just ask them to leave,” Galanti added.