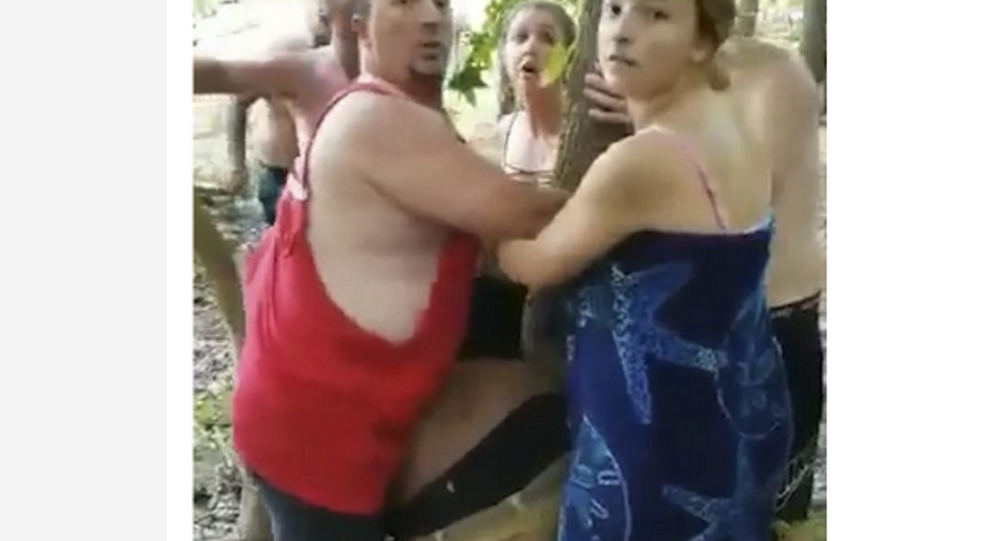 A Bloomington, Indiana, resident said he was assaulted and threatened with a noose by a group of men near the shore of Lake Monroe on Saturday.

In a Sunday Facebook post, Vauhxx Booker, a member of the Monroe County Human Rights Commission, revealed that he was “almost the victim of an attempted lynching” by a group of individuals.

According to Booker, he and some friends were at Lake Monroe, just south of Bloomington, to watch the lunar eclipse, when they were approached by a group of white men who claimed that Booker and company were trespassing on private property. One of the men was wearing a hat with a Confederate flag on it.

“On our way into the park we (a friend and I) encountered a large white male (seemingly drunk) wearing an oversized hat with a confederate flag print on it. We were polite and continued on even though the encounter felt awkward. We noticed he began following us in an ATV, and we stopped as he drove up behind us and then stated we were on private property,” Booker wrote.

Booker went on to recount in his Facebook post that he and his friend informed the upset group that event organizers of the eclipse watch party were given permission to use the trail to get to the event site.

After issuing an apology, the two continued on their way to the site. It was later confirmed by event organizers to Booker that the individuals they’d encountered were not the property owners. However, that was not the last that was heard from the individuals.

“We later found out that these individuals had blocked off the public beach way with a boat and their ATVs claiming that it was also their land. When folks tried to crossed they yelled, ‘white power’ at them,” Booker explained, adding that he and his friend decided to have a conversation with some of the group members to see if they “could smooth things over a bit.”

“Two of them jumped me from behind and knocked me to the ground. I tussled with the two and another one joined in, then two more,” Booker recalled in his post. “The five were able to easily overwhelm me and got me to the ground and dragged me pinning my body against a tree as they began pounding on my head and ripped off some of my hair, with several of them still on top of my body holding me down.”

“They held me pinned and continued beating me for several minutes seemingly become more and more enraged as they kept trying to seriously injure me and failing. At one point during the attack one of the men jumped on my neck. I could feel both his feet and his full bodyweight land hard against my neck,” he continued.

In one video of the attack shared on Facebook by Booker, a white man in a red shirt can be seen pinning Booker against a tree as someone off camera yells, “Let him go.” At one point in the video, one of the attackers tries to knock the camera out of the hand of the individual who was filming the incident. That same attacker can also be heard yelling “you invaded us” and repeatedly calling someone off-camera a “stupid f**king liberal f**k.”

At another point during the assault, a young woman can be heard yelling at the five men to let Booker go. Her yells attracted more people, who began filming the attack and also joined in telling the group of men to leave Booker alone.

According to Booker, the attackers told the growing group surrounding them that they were “going to break” his arms while bending his arms behind him. In addition, Booker recalled hearing one of the attackers tell the others to “get a noose” several times.

In another video shared by Booker, the men can be seen following and yelling slurs at Booker and several white people who had helped him, even after Booker and his friends explained that they were on public park land.

Booker suffered a minor concussion, cuts and bruises as a result of the attack, and also had some of his hair pulled out.

Following the incident, Booker called 911, which then transferred the call to the Indiana Department of Natural Resources (DNR). However, when DNR officials arrived, they did not contact Booker and other members of his party to ensure that no one was injured and instead went to speak with the attackers first.

“When they finally came to the beach near our campsite where we were all waiting, multiple individuals who didn’t know each other shared videos and relayed that the individuals had yelled ‘white power’ and a litany of other derogatory remarks, and threatened my life multiple times, and also assaulted an approximately 60 year old man who stopped to film the encounter,” Booker explained in his Facebook post.

However, the DNR officers did not arrest any of the attackers and instead said that they had contacted the local prosecutor’s office, which had confirmed “there was no immediate need to arrest anyone and that the officers would simply file a report,” Booker said.

“To reiterate, this attack occurred on public land and was recorded by numerous individuals who made statements against the attackers for assaulting them and me. I’m gravely concerned that if any other people of color who were to cross their path they could be killed,” Booker wrote in his post.

In a Facebook statement on Monday morning, Bloomington Mayor John Hamilton and City Clerk Nicole Bolden addressed the incident, as well as another which occurred between a Black resident of the city and a sheriff’s deputy from another county.

"On behalf of the City of Bloomington, we would like to express outrage and grief relating to two apparent racially motivated incidents reported in our community over the July 4 weekend," the statement read.

"These separate incidents exemplify the persistence of racism and bias in our country and our own community. They deserve nothing less than our collective condemnation. They require that we come together as a whole, and recognize that racism damages all of us, not just our residents of color. We deserve better, and we must make it happen,” the statement continued.

Katharine Liell, an attorney for Booker, noted the gravity of the situation. “I shudder to think that if those other folks hadn't been there that we would be planning a memorial service," Liell told the Indianapolis Star, also saying that she is confident the attackers will be arrested.

"I truly believe that Vauhxx would have been killed by those animals if people weren't there. I believe those people had lynching on their minds,” she added.

According to the Hoosier Times, the Indiana DNR Law Enforcement Division confirmed Monday that its officers responded to the attack and that the incident is currently under investigation. However, it did not provide an additional statement on the matter.