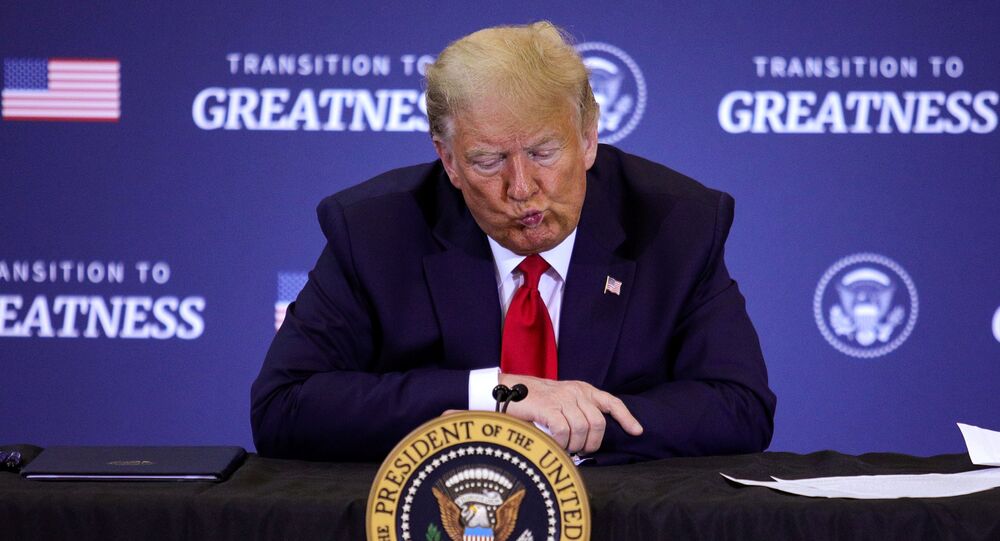 The Twittersphere was flabbergasted on Thursday when US President Donald Trump tweeted that “protesters, agitators” and “anarchists” were handled “very easily” by the “S.S.” Although Trump was presumably referring to the Secret Service, the initials SS are associated with the Schutzstaffel, a Nazi paramilitary organization.

“Our great National Guard Troops who took care of the area around the White House could hardly believe how easy it was. ‘A walk in the park’, one said. The protesters, agitators, anarchists (ANTIFA), and others, were handled VERY easily by the Guard, D.C. Police, & S.S. GREAT JOB!” Trump tweeted.

​Trump’s tweet was met with incredulity, with some tweeting that his use of the initials was meant to “inflame tensions and instigate harms.” Others claimed that even as non-Americans, they are aware that the proper abbreviation for the US Secret Service is USSS.

“For those who say Trump used S.S. because of Twitter’s character limits, then please tell me why he wasted characters for the dot between the two S’s. He could have easily said USSS rather than S.S. and the character limits would literally be the same,” another user wrote.

According to US Holocaust Museum, Nazi leader Adolf Hitler “entrusted the SS first and foremost with the removal and eventual murder of political and so-called racial enemies of the regime.”

Trump’s tweet comes after the administration used police to violently disperse hundreds of lawful protesters congregated in Lafayette Park on June 1 with chemical irritants, rubber bullets and sound cannons so that the president could walk to the St. John’s Episcopal Church across the street from the White House to take pictures in front of the historic building with a Bible.

In addition, multiple attacks by US police against peaceful demonstrators have occurred in the aftermath of the killing of unarmed black man George Floyd by police in Minneapolis, Minnesota, on May 25. Police have driven vans into throngs of protesters, pepper-sprayed them and also arrested thousands.

In a news release last week, the American Civil Liberties Union (ACLU), along with other civil rights groups, filed a lawsuit against Trump, Attorney General William Barr and other federal officials for violating protesters’ constitutional rights by attacking them.

Trump has also recently been criticized for being racially insensitive after announcing that his first re-election campaign rally would be held in Tulsa, Oklahoma, on June 19. The date is known as “Juneteenth” and commemorates the end of slavery in the US. Tulsa was also the site of one of the worst massacres of black people in American history in 1921, when a white mob murdered hundreds of black residents.