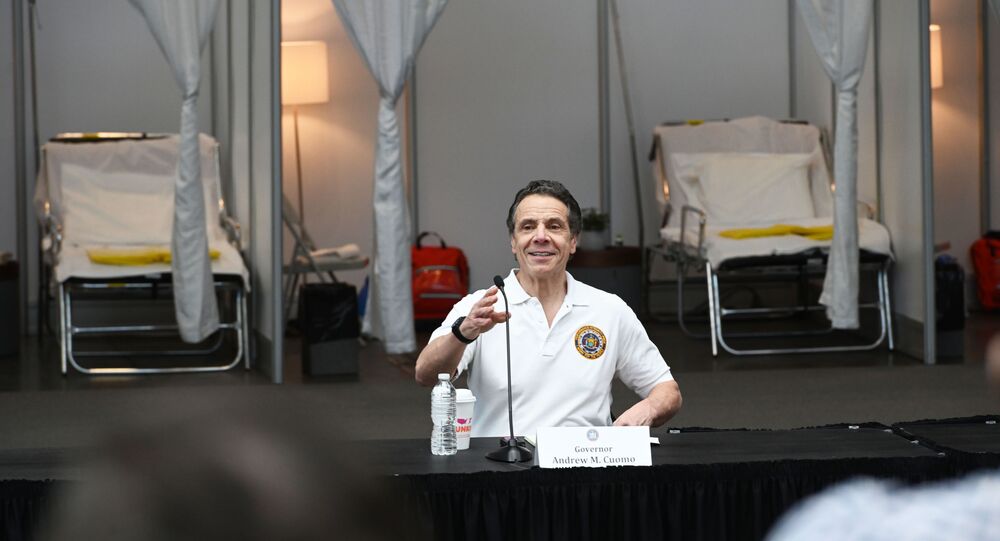 Does New York Governor Cuomo Pierce His Nipples? A Celebrity Piercer Says It's Most Likely

It has been just ten days since Andrew Cuomo issued a statewide “stay at home” order, and New Yorkers have already developed a bizarre obsession with their governor’s nipples.

Andrew Cuomo has emerged into the spotlight due to his response to the coronavirus pandemic, but so did his nipple piercing – or lack thereof. The internet is not entirely sure.

Rumours that the New York governor may have a kinky side started swirling online after Friday’s press conference, where he announced the completion of the first out of four temporary emergency hospitals as the state is dealing with a growing number of COVID-19 cases.

Photos from the press conference show what looks like two protrusions sticking up from under the governor’s shirt – leading many to believe that the 62-year-old has had his nipples pierced.

It started over the weekend with a viral post on Reddit, titled “Is it just me or is Cuomo's nipple totally pierced?”, and then spread to Twitter.

Some have suggested that Cuomo was simply taping his nippular area to stop it from rubbing against his shirt, while others said the protrusions could be abundant hair.

The piercing theory, however, has remained by far the most popular one.

Does cuomo... have... a nip piercing pic.twitter.com/H4iLWglr6m

every time i think my brain cant get any worse something like the phrase "andrew cuomo nipple ring" comes along https://t.co/D9raBs91O8

So... Is the NY State unemployment site not working for everyone else too, or is it just me.

I assume it's just me for making fun of Cuomo's nipple piercings in this photo. pic.twitter.com/DvIWJvE2uw

Only thing getting me through this is the possibility that Cuomo has a nipple piercing. pic.twitter.com/kDjIQsGOAG

I noticed Andrew Cuomo's nipple piercing(s?) right away. Is he trying to be Rihanna or what? And that's who we put our faith in to lead the way in New York? Oh, and also: 🤢🤮

Cuomo, who split in September from his long-time girlfriend, author Sandra Lee, has yet to address #nipplegate, as the episode has been dubbed. His senior aide told the New York Post, “Of course not, sorry Internet,” when asked if the governor has a piercing.

However, Brian Keith Thompson, a celebrity piercer and founder of Body Electric Tattoo, stated that Cuomo “fits the bill for a nipple piercing. He seems like the kind of working out guy who would have one.”

Thompson, who has had Beyonce and Scarlett Johansson among his clients, told the Daily Beast that Cuomo likely had a curve barbell piercing.