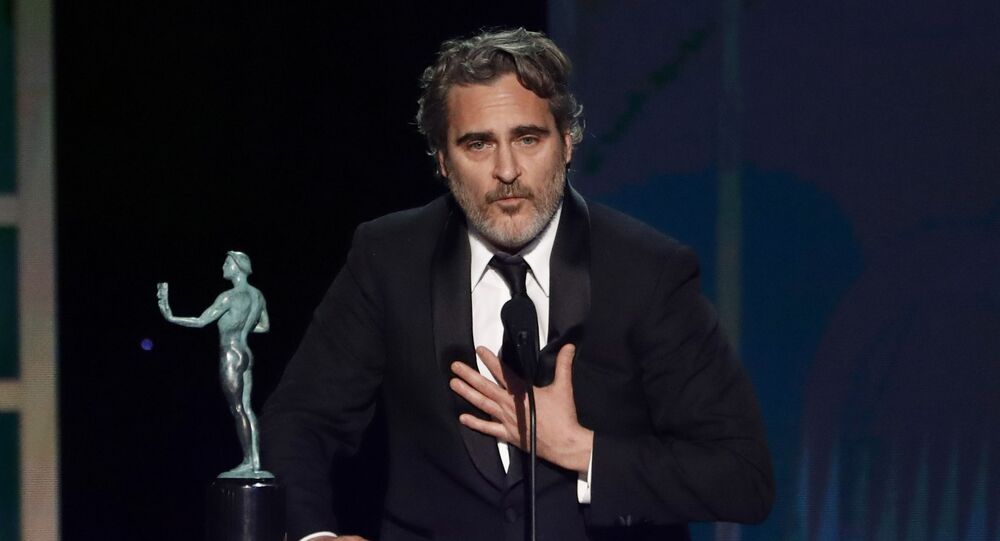 New Delhi (Sputnik): Joaquin Phoenix lifted the Lead Actor Award for his role in Todd Phillips' “Joker” at the 72nd British Academy of Film and Television Awards (BAFTA) that took place in London. However, the actor slammed the gala event for coming up with an all-white line-up in the best actor category during his acceptance speech.

During his acceptance speech, which was widely applauded for being honest, Joaquin Phoenix thanked BAFTA for being very supportive of his career, but also admitted that he felt “conflicted, because so many of my fellow actors that are deserving don’t have that same privilege” and added that with this move, “we send a very clear message to people of colour that you’re not welcome here”.

Addressing some of Hollywood's best-known faces, including Adam Driver, Jonathan Pryce, Saoirse Ronan, Joaquin Phoenix said: “I think that’s the message that we’re sending to people that have contributed so much to our medium and our industry and in ways that we benefit from”.

He also felt that nobody “wants a handout or preferential treatment, people just want to be acknowledged, appreciated and respected for their work. This is not a self-righteous condemnation. I’m part of the problem”.

“We have to do the hard work to truly understand systemic racism. I think it is the obligation of the people that have created and perpetuate and benefit from a system of oppression to be the ones that dismantle it. That’s on us", he added.

While he was speaking, the camera zoomed towards some of the white actors who were present inside the hall.

Netizens around the globe, including his fans in India, thanked him for pointing out a perceived elephant in the room and said that he is one actor who always talks about societal issues and achievements on such platforms.

Damn, Joaquin never talks about himself in an award acceptance speech rather focusing on topics such as systemic racism in Hollywood or appreciating the work of his fellow nominees. Mad respect. #BAFTA2020 #JoaquinPhoenix #diversity #Joker2019

For some, the actor's move added respect in their hearts for him.

Such a wonderful speech, respect for you man #JoaquinPhoenix #stopracism https://t.co/Tsy3OdYIcO

The other nominations in the Best Actor category at BAFTA were Leonardo DiCaprio for “Once Upon a Time… In Hollywood”, Adam Driver for “Marriage Story”, Taron Egerton for “Rocketman”, and Jonathan Pryce for “The Two Popes”.