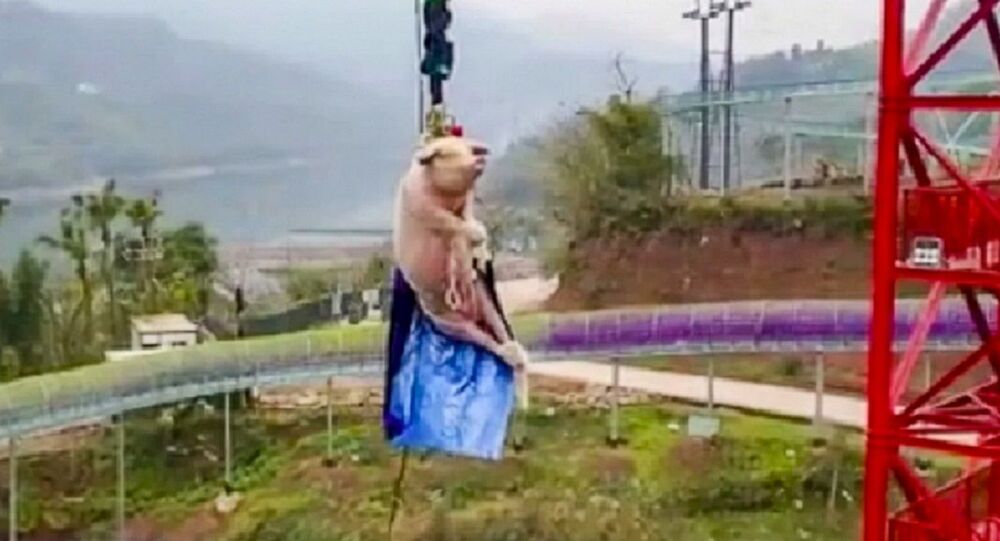 The bizarre stunt was reportedly organized to mark the opening of a bungee jump ride at the Mexin Wine Town theme park in southwest China’s Chongqing municipality. Netizens did not share the theme park's inspiration to celebrate the end of the Year of the Pig and the dawn of the Year of the Rat.

Footage that instantly went viral on Chinese social media shows theme park staffers dragging the bound animal to the top of a 70-meter-high (230-foot) attraction and then pushing the pig off the platform, making the unwitting mammal the first living being to ride the bungee jump.

While the obviously terrified animal swoops down, human laughter is reportedly audible in the background of the clip.

The stunt prompted a backlash among netizens who condemned the theme park owners.

“I don’t see anything funny in it [...] Why were there people laughing? Just because the animal can’t express fear doesn’t mean it is not afraid”, one person on Weibo said, cited by the South China Morning Post (SCMP).

Weird news from our great china: Push a real pig to test for Bungee jumping and let it yell with free falling. You can never imagine how inhumane and cruel those chinese can be. #AnimalRights #AnimalCruelty #inhumane #China_is_terrorist #ChineseCulture #Animalabuse pic.twitter.com/5lVJtiG76j

Some netizens were outraged at the move, proposing instead to replace the pig with the theme park owner, according to the media report.

“Tie up its boss and throw him down, would be much more entertaining”, a Weibo user said, cited by SCMP.

© AP Photo / Neal Ulevich
Co-opted Communism: China Firm Builds $1.7 Billion Workers’ Paradise Theme Park
According to the report, the owner of the venue, who sought to remain anonymous, responded later to the indignation of netizens.

“It’s our opening day today. We let the pig make the first jump because pork prices have been very high this year and recently they dropped a bit”, the owner quipped, cited by SCMP.

A spokesperson for the park justified the owner's action by claiming that the animal was destined to be butchered for a Lunar New Year banquet and that a shock before imminent slaughter is "normal" for pigs, suggesting that an animal's sufferings are "just a bit of entertainment” for others, according to the media report.