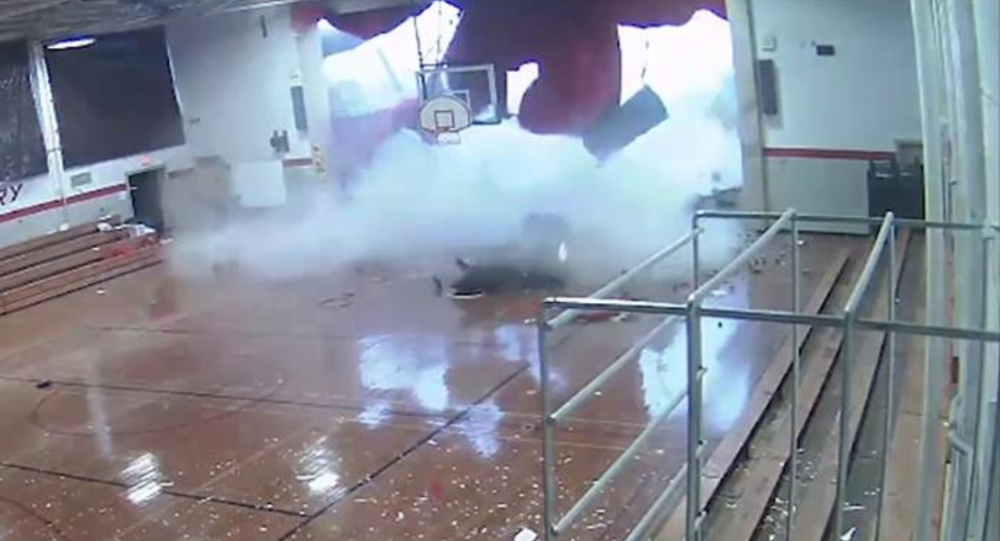 Video footage shared online shows the moment the roof of a gymnasium inside a US school collapsed on Monday.

The incident took place at Union Intermediate School in Sampson County, North Carolina. In the video, students are seen playing basketball when suddenly the gym’s roof falls in and takes down a portion of a wall during a thunderstorm.

​“It was our PE day,” fifth-grader Chloe Brewer, who was one of the 21 student in the gym at the time of the incident, told local outlet WRAL. “We were playing basketball, and it just sounded like something exploded in there.”

“I just turned around and was looking at the stage, and it just collapsed. And then we started running, and something hit me from behind, and I fell down. And then the glass started breaking,” she added.

“It was just ‘bam,’” Union Intermediate Principal Dondi Hobbs recalled. “We had no warning. Nobody received any alerts on the phones or anything before we were in action mode.”

The US National Weather Service has confirmed that a “water-loaded microburst” took place over the school at the same time that the roof collapsed. According to the Vane, microbursts, also known as “downbursts,” are “sudden downward bursts of wind from the base of a thunderstorm,” which can reach speeds of 60 mph before impacting the ground and “spreading out in all directions.”

The school is still investigating the incident.