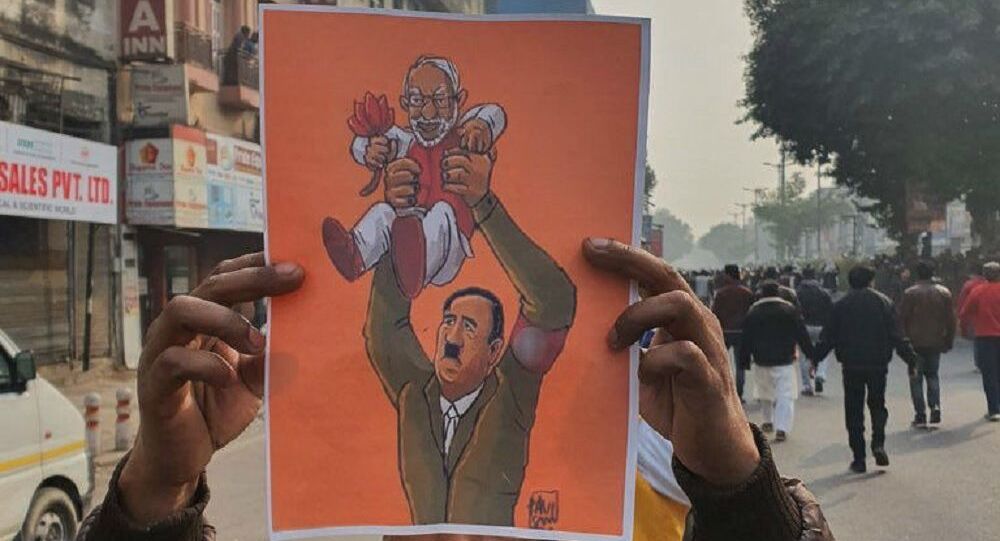 New Delhi (Sputnik): With protests over India’s new Citizenship Amendment Act (CAA) spreading across country, demonstrators and opposition parties in the nation have started comparing the Indian prime minister and his policies to Germany’s Hitler.

The Indian segment of Twitter is in flames as clashes around the CAA are heating up in the country. Now netizens are furious over a controversial comparison of Prime Minister Narendra Modi with the leader of Nazi Germany Adolf Hitler.

A poster of Hitler carrying Modi in his hands, which was apparently held by one of protesters, was shown on a German TV channel as it was reporting on the demonstrations over the new citizenship law in India

German TV Channel shows a poster with Modi and Hitler together

Modi has been destroying his own international reputation thanks to his nonsense decisions. There is still time, fall back on CAA-NRC, otherwise world will remember you like this 👇 pic.twitter.com/7lKWTuNQ3K

After the German TV report, a screenshot depicting the poster spread on the Indian segment of Twitter, with netizens lashing out at the comparison. Questions have also been raised about Modi’s international reputation, which they claim is being tarnished. The picture has garnered 3.8k re-tweets and 9.1k likes.

He is not worried about his Int'l credentials. He is worried about India.
Better if you also contribute in nation building. Don't trap into fear mongering.

This kind of hyper comparison makes no sense. The credibility and intelligence of the people comparing Modi to Hitler needs to be questioned. Our Luytens media and brainless liberals have no originality and became slaves to western concept of India which INC marketed for 70+ yrs.

This kind of hyper comparison makes no sense. The credibility and intelligence of the people comparing Modi to Hitler needs to be questioned. Our Luytens media and brainless liberals have no originality and became slaves to western concept of India which INC marketed for 70+ yrs.

When CAA and NRC are done by design why would they fall back.

International Media will keep quite as they did after 2002.

That's the right place of Modi..
In Hitlers hands 👐.. What a damn tragedy of India?
Whoever voted must take responsibility of this..
Naked emperor #Modi

Other users justified the comparison, with some saying that Hitler’s arms are the best place for Modi. Some called it unfortunate that the Indian prime minister was being compared with a dictator infamous for undertaking ethnic cleansing.

Germany knows better than any other country what holocaust felt like and what were the results of trusting Hitler. And now they can see us walking on the same path. History is supposed to remind us of past mistakes, but Modi government is adamant on recreating it #CAA_NRCProtests

Once upon a time in India 🇮🇳.. ..🤔 pic.twitter.com/TkHlDZNjCQ

Modi will boycott his Merc now.
Can't do anything beyond that, anyway.

This is not the first time that Modi has been compared to the autocratic dictator for his policies.

Attacking Prime Minister Narendra Modi over increasing unemployment in the country, the former president of the Congress Party, Rahul Gandhi, once remarked: "The Fuhrer promised us 2 crore jobs a year. 5 years later, his leaked job creation report card reveals a national disaster. Unemployment is at its highest in 45 years. With 6.5 crore youth were jobless in 2017-18 alone. Time for NoMo2Go".

Unemployment is at its highest in 45 yrs.

​Indian Prime Minister Narendra Modi has been compared to Nazi dictator Adolf Hitler recently due to the controversial citizenship law targeted by protestors for being discriminatory against Muslims, as it grants citizenship to only non-Muslim minority immigrants who fled persecution in Bangladesh, Afghanistan and Pakistan on or before 31 December 2014.

However, the Indian government in parliament said that Indian Muslims have nothing to fear about the new law and rejected reports that the legislation is biased against them.