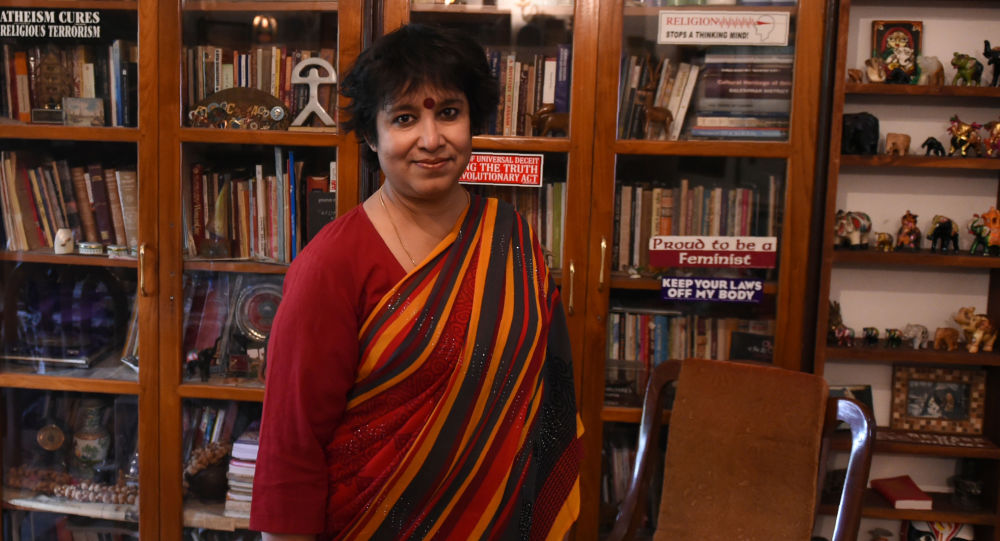 New Delhi (Sputnik): Controversial writer and feminist Taslima Nasreen, who was expelled from Bangladesh for taking on “fundamentalist Islam” through her writings, is currently living in exile in India.

Taslima Nasreen, while referring to a dance performance by Bollywood duo Salman Khan and Actress Katrina Kaif in Bangladesh, took a jibe at “conservatives” in her home country.

“They love all non-Islamic things as long as it comes from other countries,” she said.

Both Salman and Katrina were in Bangladesh to perform at the inauguration ceremony of Bangladesh's Premier League (BBPL) - a professional cricket encounter.

While the Twitterati came out in her support, stating their views on the exiled author's post, others stole laughter amid serious tweets.

They were elegantly dressed for the occasion and their job. Cheers to the cheerleaders 🥂

Half naked is not the right phrase Scantily Dressed may be .

The logic of your words is consistent

They want all the things they ban in public in their harems. In fact they want more of them, at least 4 of them. That's why they ban as they think everybody is out there to hunt female bodies, and they want all for themselves.

A few took the opportunity to criticise the 57-year-old feminist, questioning her views and opinions.

They came to see Salman Khan

what's problem with u ? when Muslims oppose music, dance, leisure you call them orthodox when they does all such things you call them hijabi, burqawali, bearded mulla all that.

Ok they loved non-Islamic thing than why you are Not OK?? I think practically you are Islam and Islamic believe. In India CAB will give shelter to Hindus not You. 🙏 😂 🤣

I thought you were forward thinking and broad minded???

at first i would say that,,all of the audience came to seeing only Megastar Salman khan,Please think positive.Bangladesh is a Muslim country...This is not our culture that's true.But Indian culture totally different@taslimanasreen

Singing and dancing has often been referred to as haram (forbidden) in Islamic religion. However, the religion has two sides to it. While the orthodox clergy condemns such performing arts, another segment called the Sufis are the most dedicated dancers in the Muslim world, highlighting it as a way to grow closer to Allah, the Muslim God.

Nasreen has been a vocal critique of orthodox Islam. Her book ‘Lajja’ (Shame), in which she shared her views on Islam, sparked a furore across Bangladesh. In 2015, the award-winning writer received threats from Al Qaeda-linked extremists, media reports said.

Since then, the author has been living in exile in India, and some other countries. Indian Home Ministry in July 2019, extended the author’s residence permit for yet another year until July 2020.