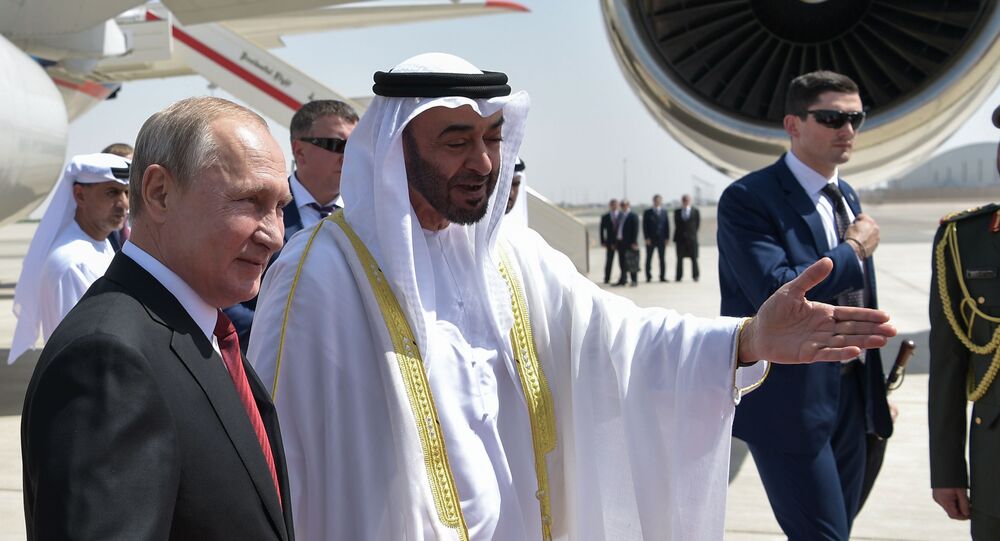 On Tuesday, Russia’s commander-in-chief began his visit to the United Arab Emirates (UAE), which is dedicated to a variety of issues ranging from affairs in the Middle East to boosting business cooperation. The reception that the hosts offered him in Abu Dhabi has given a new meaning to the word “welcome”.

Russian President Vladimir Putin’s visit to the United Arab Emirates has been celebrated in a way that could startle even a VIP guest who has seen it all, as it included a horse escort alongside his vehicle and what appeared to be cars from the Russian road police.

As soon as Vladimir Putin landed at Abu Dhabi Airport, where he was met by Crown Prince Mohammed bin Zayed Al Nahyan, he was not only saluted by gunfire. On his way through the oasis city, which was extensively decorated with Russian and UAE banners, the presidential cortege was welcomed by jets from the country’s air force that painted the sky in the colours of Russia’s national flag: white, blue, and red.

​Putin rode in an Aurus limousine, which is a Russian luxury car brand that Moscow aspires to sell and produce in the Middle Eastern country. Along with black vehicles, the cortege included what looked like two Russian road police cars, as one Russian journalist pointed out with a caption: “How far signs of respect can go”. The Mercedes vehicles were coloured blue and white, but had local UAE plates and Russian road police emblems on them.

​Apart from regular cars, the president’s limousine was escorted by horsemen carrying both countries’ flags.

​Putin also met the first UAE astronaut, Hazzaa Ali Al Mansoori, who travelled to the International Space Station (ISS) on board a Russian Soyuz MS-15 spacecraft in September and successfully returned on another spacecraft on 3 October. He presented the Russian head of state with a medal. This was not the only gift that Putin received, as he was also given a replica of the UAE’s former presidential palace by the crown prince.